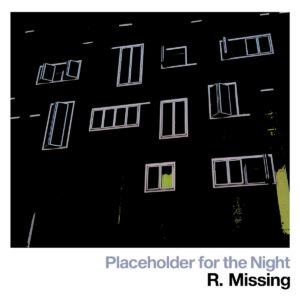 If you spend time poking around on the internet, chances are you’ll find very little about New York’s R. Missing. Not only does this musical project boast a less than friendly name for search engines, when you do track them down, their social media accounts give no real sense of history or any kind of backstory. It seems that the self-confessed “darklings” are happy enough existing somewhere on the fringes of social interaction; always content to creep out of the shadows from time to time when they have something important to share. When you finally get to hear them, you realise that this is all very deliberate, as there’s plenty about their darkwave sounds and bleak synth based tunes that suits their aloof approach perfectly. The blankets of synth pop/alt-pop that filled their 2017 EP ‘Unsummering’ suggested a musical interest that fell somewhere between Cocteau Twins, Lana Del Rey and the much overlooked Smoke Season – all very strong building blocks – but their second release, the ‘Placeholder For The Night’ EP (released in the death throes of a troubled 2020) promises even more musical detachment.

The title track opens with an electronic melody that sounds like an overture for an old 1930’s horror film as heard through the ears of Tangerine Dream, before the body of the track sets up a steady rhythm and some fantastic deep electronica grooves. Increasing the beats midway, it’s easy to suspect that R. Missing have a further interest in later Euro electronica, as traces of Air and Royksopp inform the growing arrangement. Linking the various pieces of this gradually blossoming melody, a heavily treated voice lends so much of an other worldy quality; the vocal melody is easily likeable, even if the core of the lyrics are so drenched in a dreampop echo, the song almost becomes like an unexpected alternate reality. Sliding into the fade – which feels as if it comes far too early – R. Missing’s blend of pop and electronica always seems keen to leave the listener wondering what might come next. It could be anything.

‘Alms’ offers something that, if possible, seems even more minimalist. An ominous quiet punctuated by beats and claps appears to introduce something of a modern twist on Ultravox’s ‘Vienna’ – never a bad thing – before disjointed bleeps join a cold and detached voice. The slow beats change tack, sounding more distinctive once several ticking sounds suggest something of an emotive timebomb. ‘I had to kill your parents’, sings a voice that almost seems devoid of emotion, taking R. Missing’s already bleak viewpoint to new depths. There’s a lot in this minimalist set up that’ll keep you listening; it’s almost as if the unsettling nature comes from its constantly holding back, and even when reaching a climax with multi-tracked verses, it’s almost sketch-like approach becomes everything. It possibly isn’t going to be a favourite for first time listeners, but this marriage between sparse electronica and a dream pop voice used to disarm is quite striking, to say the least.

Having warmed up, relatively speaking, the EP brings its best sounds during closing number ‘Darkness, I’ll Always Be Your Girl’, where extra distortion and beats beef up the R. Missing sound to delve into a world of dark, almost shoegaze moods. Although the haunting and echoing vocal always suggests something far more modern, it’s almost as if we’ve been given access to old Lush tapes remixed by Lustmord. The way a cool voice weaves in and out of feedback squalls and a pulsing drone suggests an instant classic in dreampop/shoegaze terms. The arrangement has such a brilliantly retro feel that, on first listen, you don’t even notice that there isn’t really a song here – just a repetitious two line mantra which, again, seems like the perfect compliment to the performers’ overall sound. Despite it feeling as if there’s only the skeleton of an idea here, though, fans of such electronica should be in their element.

This is devastatingly short, but it’s great. It has an inherent coldness, yet its blankets of synthetic sound seem so full and dreamlike. So much of that is due to a light, filtered voice, drawing its core from classic 90s dreampop, but the whole package just…works. If you have even the most fleeting interest in light electronica, dreampop or alternative pop noise, you owe it to yourself to take a listen.