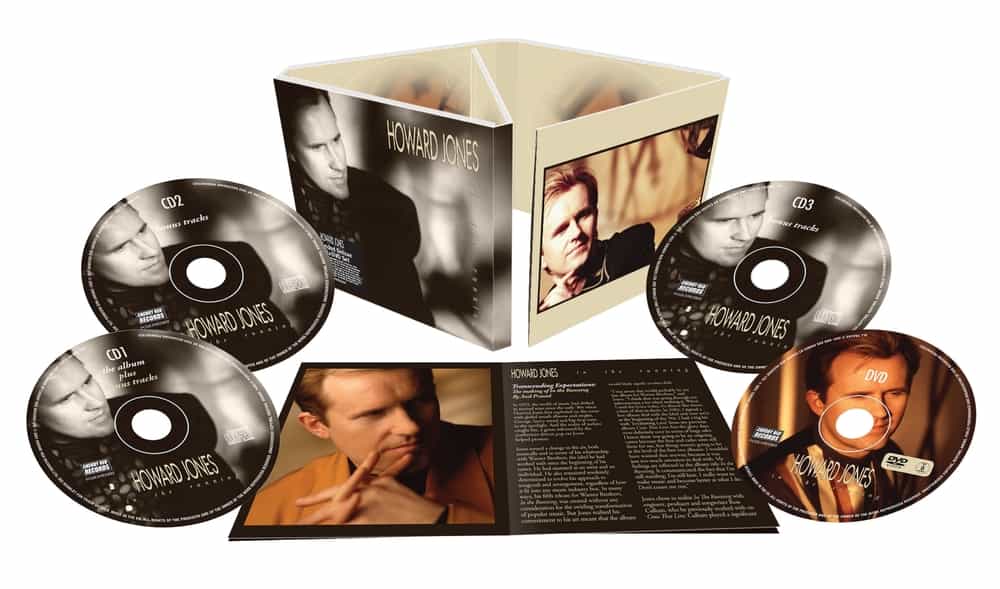 The presentation takes a somewhat of a no-frills approach, with the discs and booklet presented in a fold out digipak, in keeping with the 2020 reissue of ‘Cross That Line’. Obviously, it’s the music that’s important and a new remaster of the original album makes the material shine. Bright without being brittle, clean and not obviously brickwalled, it’s one of those remasters that brings out important detail without sounding too different. The clarity of the electric piano and slide guitar throughout ‘Fallin’ Away’ in particular more than reinforces the original composition’s clean and clear arrangement, while the pop perfection of ‘Tears To Tell’ (especially) highlights Jones’s natural gift for slick pop, still sounding like one of the greatest “lost” hits of the era. Aside from its opening track ‘Lift Me Up’ – a synthier piece that scored a moderate US hit – ‘In The Running’ isn’t always the most joyful record, but it’s a very rich listening experience. Unlike so many deluxe sets – particularly the Suede and Scorpions reissues from 2011 and 2015, respectively – fans can be thankful that none of that magic is scuppered by a terrible new mix or misjudged remaster.

Obviously, if you’re looking at a 3CD/DVD version of ‘In The Running’ as an important purchase, you really don’t need reminding of how good the album material is; you’ll be looking at this purely from an “extras” point of view. In terms of bonus materials, it’s a mixed bag; not as generous as the ‘Human’s Lib’ box by any means, but definitely worth the cash for a decent upgrade. The first disc appends the album with some fantastic bonus tracks. The aforementioned Donald Fagen cover cements Jones’s new direction into adult pop, and although its played absolutely straight, a selection of harmony vocals and occasional jazzy guitar augment Howard’s confident vocal with style, creating a welcome change from the original. ‘New Man’, meanwhile, introduces a few more synth quirks to create some brilliantly buoyant pop without drawing too much away from a quirky, jazz piano solo and and an extended coda where HoJo’s stabbed notes and descending melodies do battle against a shimmering guitar. Something a little harder to track down, ‘You Say’ (originally the b-side for ‘Tears To Tell’) isn’t shy in exploiting a new found fascination with Steely Dan. A samba rhythm quickly recalls the Fagen/Becker classic ‘Do It Again’ and, indeed, a couple of other musical nods more than suggest a move towards the Fagen-esque. Over the musical rhythm, Howard adopts a vocal that mixes his familiar tones with a touch of falsetto and although a couple of synth horns cheapen the overall mood, these four minutes often sound like a natural extension of ‘In The Running’ itself. Those synth horns make another appearance on ‘Takin’ The Time’, a tune that sounds more like an 80s soul throwback than HoJo reaching into the 90s. It’s very much the weak link with regard to these extra songs, but even then, a fine pop chorus and great vocal make it worth hearing, especially for the bigger fan.

A cover of the David Ackles song ‘Road To Cairo’ (from the Elektra Records release ‘Rubyayat’) is a great, moody ballad, which again isn’t always far removed from the ‘In The Running’ material with its more natural sound. Descending melodies, a blues-edged vocal and fretless bass merge to great effect, and if you ever fancied hearing Howard approximating something more like an INXS deep album cut, here’s your chance – it’s certainly an improvement on the Ackles original… A cover of Umberto Tozzi’s ‘Other People Are Us’ changes the mood for some easy listening pop that could’ve been covered in the same manner by Paul Young. Obviously, Jones’s voice is recognisable a mile off and the same keyboard sound that powers the best bits of ‘In The Running’ adds some very welcome musical colour, but it’s rather easy listening fare. Best of all, ‘Don’t Be Part of It’ (originally from ‘Tame Yourself’, a PETA charity album) shows how well Howard tackles 80s funk. With a wall of synths and a slap bass sound, the track quickly sets up a groove akin to an old Style Council 12”, while the lyrics warn against animal abuse and the evil of slaughterhouses. Musically, it’s quite far removed from Howard’s past – and a world away from ‘In The Running’ itself – but as a standalone listen, it’s fairly strong. [A radically different ‘Moo Mix’ from the original 12” single also fearures; it replaces the 80s funk backbone with a barrage of keyboards that owe more to the commercial end of Italian House music. In some ways, it’s superior; in other ways, it seems dated in 2021, but it’s nice to have, all the same.]

Joining these tracks are various extended versions of ‘In The Running’ tracks and a couple of extra mixes of ‘IGY’ – all of which are welcome collection fillers for the fan, but a little less interesting for the casual listener, especially in terms of repetition. That said, these period extras all make more sense than the previously unreleased instrumental versions of the complete ‘In The Running’ album. Some tracks appear to be the tracks before the vocals were overdubbed; a couple of others show off a few otherwise unheard flourishes very clearly – as with the shimmering guitar on ‘Two Souls’ – but it’s more than fair to suggest these ten tracks are for obsessive fans only.

In addition to a varied audio selection, a DVD disc rounds up a couple of rarely seen promos and other bonuses. Obviously, with no UK hits, this set is unable to boast any Top of The Pops appearances, but Howard’s performance on lunchtime magazine show Pebble Mill promoting the ’93 remix of ‘What Is Love?’ and ‘IGY’ is a welcome addition. A lengthy interview with Jones (recorded just before this set’s release) gives further insight into the making of ‘In The Running’, which is also entertaining if you’re one of the thirty eight people who’ve loved the album forever.

While some of these extras don’t necessarily enrich ‘In The Running’ as effectively as the bonus materials in the ‘Human’s Lib’ set, its exhaustive approach – right down to the inclusion of those instrumental tracks – gives the bigger Howard Jones plenty to enjoy, even if some of the extras will only be played a couple of times. Perhaps its biggest lamentable omission is its lack of live material. Jones touted the US playing grand piano following the release and some excellent recordings exist. For completenesses sake, it would have improved this set dramatically to have the hard to find ‘Live Acoustic America’ disc included, even if most fans own it already.

Although not perfect, the good more than outweighs the bad here. It’s a set that represents great value above almost everything else, showing up some similarly curated sets from major labels that retail at two or three times the price. Even with a few less than essential bits included, if you’re a fan of ‘In The Running’ – arguably Jones’s most perfect fifty minutes – you’d certainly be a fool not to pick up a copy.