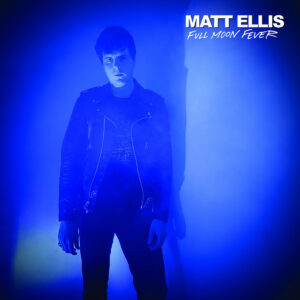 Ellis kicks off a sketchy 2021 with an obvious continuation of his Ramones influenced project. His ‘Full Moon Fever’ full length takes the bulk of the old EP songs and gives them a proper send off. Now studio recorded – and with the benefit of a real drum kit – this collection of short and aggressive songs sounds far sharper and even more purposeful.

Right from the opener ‘DMT Is Good For Me’, Matt’s Ramones love and punky intents are blindingly obvious. For those who missed the demo EPs, this track offers a near perfect example of the performer’s obvious homage: his scratchy vocal often sounds like Dee Dee Ramone’s lesser heard voice; the riffs pull a huge influence from ‘I Don’t Wanna Walk Around With You’ and the slightly flat drum sound – the new addition that elevates the material throughout – brings such an authentic 70s punk sound, you can’t help but love it. The same feeling of fuzzy nostalgia stokes up the four chord fun throughout ‘I Don’t Wanna Know’ where Matt takes the chopping riffs of the Ramones’ peerless ‘Leave Home’ album and recycles them perfectly while adding a pointed vocal that sounds as if it could drop into an old Devo song at any moment, while ‘Flowers In The Moonlight’ blends elements of ‘Judy Is A Punk’ with an odd twist into a chorus that sounds like a UK punk/Damned reject. Although one of Ellis’s more uneven experiments, its crashy feel and sneering vocal are enough to help it to succeed.

For an absolutely pure Ramones homage, look no further than ‘Poison Holiday’, which is little more than a straight rip of ‘Havana Affair’ coupled with the chorus of ‘Psycho Therapy’, or ‘Pig Head’s more than obvious lifting from ‘Pinhead’. What these numbers lack in originality, they make up for with musical tightness and urgency. A similar blend of force and brevity continues throughout the bulk of the album, and this very much singles Ellis out as one of the most assured DIY performers. Between the buzzsaw riffs that power ‘My Neighborhood Is A Dump’ (a number that twists another hook from the Ramones’ ‘Pinhead’ for its own amusement) and the repetitive lyrical attack of tunes like ‘Bad Day’ and ‘Monkey Brain’, there’s so much to enjoy. For those familiar with the earlier recordings, ‘Monkey Brain’ provides a more obvious link by clinging onto its mechanical rhythms, but still improves on the original bathroom demo by placing a greater focus on a great rhythm guitar part. In its own small way, it still shows Ellis as a musician who’s keen to deliver a great punk experience, even if the material shows signs of very obvious lifting. As has been said before, though, if you’re going to steal a couple of riffs, you might as well take them from the best.

With a slightly more original arrangement applied to the usual Joey & Johnny love, ‘Death Rattle’ provides an obvious album highlight by employing a slightly slower tempo to accentuate a much fuller guitar sound. There’s a lot in the fuzzier end of this tune’s riff that could be Johnny Ramone circa ’81, and although the number sticks with Matt’s preference for absolute minimalism (in and out in a minute and six seconds; no flab), it actually sounds rather fully formed. Likewise, ‘Walk Alone’ scores highly in terms of Ramones-esque brilliance when Ellis adopts slightly more of a cocky vocal, which set against the kind of slightly bigger riffs that powered most of ‘Road To Ruin’, provides yet another bite-sized punk nugget that’s definitely of the tried and tested variety, but still thrilling in its own way.

Even on the occasions that ‘Full Moon Fever’ drops into something rather more rough and ready, Ellis shows a genuine flair for a retro punk style. The raw ‘Rat Fucker’ offers punk fans something a little closer to an old Dead Boys number thrashed out by a garage band before cutting short after things have barely got underway, and the demo quality ‘It Stinks Like Shit’ sounds more like a tossed off Screeching Weasel affair from the late 80s. These show an ability and affinity with vaguely different punk styles and although neither derails the album as a whole, it’s fair to suggest they require a little more effort to love.

Originality be damned – this release promises some top drawer fun for all lovers of the classic Ramonescore style. Its twenty four minutes go by in a blur, almost as if Ellis is presenting different musical sketches without feeling the need to run to the extravagance of a third verse or guitar solo, but that very direct approach is ultimately its greatest strength. With eighteen songs packed into well under the half hour, ‘Full Moon Fever’ is a genuine adrenaline shot – the kind of DIY record most Ramones fans will love, even if the source material is…somewhat obvious.