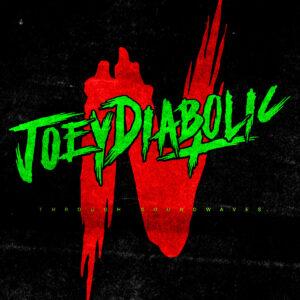 In some ways, ‘Vol 4’ isn’t as good as its predecessor, but its its two genuine highlights are far and away the best thing JoeyDiabolic has set ever down on tape. Before the listener can experience those highs, however, the EP gets off to a wobbly start. The theme from Nightmare On Elm Street is presented as a dark and minimalist synth piece which, on its own, is okay but never remarkable. It sort of comes into its own in the way that Diabolic uses it as lengthy intro creating tension, before sliding into a rendition of the Judas Priest classic ‘Nightcrawler’. As one of the highlights of Priest’s ‘Painkiller’ LP, you’d think that ‘Nightcrawler’ would lend itself well to a good cover, but stripped of Rob Halford’s trademark screams and Scott Travis’s powerhouse drumming, it just becomes…ordinary. Joey might get away with “ordinary” if he had a decent voice, but he mumbles and croons his way through half the performance like a cut-price Danzig. When picking up speed for the chorus – and with the addition of thrash metal riffs and a growly black metal vocal – things improve somewhat. Here, the listener gets the sense of a one man band chucking everything but the kitchen sink into his work. Despite best efforts, though, there’s still not always much here you’d listen to more than a couple of times. Its most redeeming quality is its ability to remind you how good the source material is. An improvement comes when JoeyDiabolic decides he’s going to take the guts of Billy Idol’s ‘Flesh For Fantasy’ and give the song the full industrial treatment, shifting between the sub-Nine Inch Nails mechanics of a strong verse into a heavier chorus where moody male vocals and a clean female tone suggest a love for KMFDM. Across these four minutes, the performer’s abilities to stir up nostalgic feelings for early Stabbing Westward, Gravity Kills and other similar acts certainly has merit, but much like the Judas Priest cover, it’s never going to replace the original in your affections.

An improvement on those covers, ‘Surreal Love’ (a JoeyDiabolic original) provides a great 80s goth homage, sounding like an old Sisters of Mercy tune put through a Stabbing Westward filter. His cold and detached vocal style suits the song and his heavy, chopping guitar work always provides a great counterpart to a second and more melodic vocal that fills the chorus. One listen to this is enough to realise that Diabolic is more than capable of whipping up nostalgia on brand new and original material – and he’s better at this original stuff, too, as a rule, so it seems odd that he’s so fixated on cranking out cover tunes half the time. The other original, however, fills five minutes with heavy synths and samples filling out a less interesting song where, at best, there are glimmers of ideas that sound like an early NIN cast-off (it’s almost as dull as bits of ‘The Fragile’); at worst, it meanders with an unsure quality that sounds like Joey has been listening to ‘Splinter’ era Gary Numan…and just not understanding what made that really work.

This brings us to the main reason to listen to this EP – even as hit and miss as it is, it offers another genuine jewel when JoeyDiabolic further explores his Craven obsessions in style by covering ‘Nightmare’ – the theme to Nightmare On Elm Street 4, originally by Tuesday Knight. Gone is the brittle 80s production and hard drum sound; instead, Joey takes the tune in a slightly moodier direction with opening beats and grooves that aren’t a million miles away from the Human League’s ‘Being Boiled’, before adding blankets of darkwave synths, providing more of a synth goth feel. At the heart of the performance, the film’s fans will still recognise the tune with ease and might even welcome hearing it reworked with a slightly fuller sound. Of particular note here is guest vocalist D. Lolli of Mama Doom (also heard on the Billy Idol cover) who seems to relish every opportunity to rework the melody in more of sultry manner.

This is worth dipping in to heat the Nightmare On Elm Street 4 theme song reworked in a way that dispenses with any AOR-pop frivolity, but probably couldn’t be widely recommended to anyone except the more goth obsessed. That said, at least in an age of streaming and sites like Bandcamp, you won’t have spent any money in seeking out such novelties.