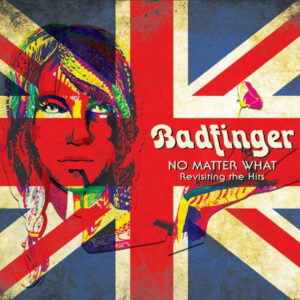 Unfortunately, Badfinger’s brilliance has sometimes been overshadowed by a tricky history – two suicides and various legal wranglings have left something of a dark cloud over their legacy. In addition, there have been two different bands claiming the name for their own, further muddying the waters. Given that at the end of 2020, there were still two bands operating under the Badfinger name, you’d think the record company would want to make it clear as to which act is responsible for the 2021 release ‘Revisiting The Hits’, but…nope; nothing in the supplied PR materials, or on the record label website, or even the official Bandcamp page gives any clue. To make it clear, this is the work of Joey Mollund’s Badfinger…and as the only surviving member off the original band, this should also be considered the genuine Badfinger at the time of release.

So, with all of that out of the way, we reach the other tricky subject of revisiting material. In many cases, such an activity cheapens a legacy. It can lead to material that sounds like filler on cheap compilations churned out for a quick buck. It’s rarely a good idea, and all too often the last desperate act of a band who’ve stopped making money from the original recordings. Luckily, Molland has thought of that. Rather than being a quick and cheap rehash, he’s invited a whole host of famous chums from the power pop world and beyond to put their own stamp on a few great tunes.

At the top of the pile is a fantastic recording of ‘Day After Day’ featuring vocalist Terry Reid with flute accompaniment from Jethro Tull’s Ian Anderson. This lends a huge weight to any argument why these recordings aren’t without merit. The vocals manage to convey a sense of world weariness while retaining a smoothness that most veteran performers have long lost; Anderson’s flute interjections dance in a way that would initially seem to be at odds with the song’s wistful air, but it all works beautifully. It won’t replace the original in your affections of course, but it certainly makes a welcome alternative. In terms of unexpected guests, Rick Springfield pops up for a collaboration on a very melodic reworking of ‘Love Is Gonna Come’, where the harmony vocals are pushed to the fore during the chorus, and a rather solid slide guitar fills plenty of space throughout. In terms of vocals, this is a real highlight with Springfield stepping up for the middle eight and showing how his 80s pop charm wasn’t really so fat removed from Badfinger’s rich power pop sounds.

A solid run through of the brilliant ‘Come & Get It’ is also worth hearing out of curiosity since it closely resembles the original, but tweaks everything for a little bit of a psych pop feel via a hazier vocal. Joining the band on this recording is the legendary Rick Wakeman who adapts the McCartney rumpty-tumpty rhythm to allow for a more flowery style. Between the beats and vocals, his piano can be heard dropping in extra flourishes which, suitable for the job in hand, occasionally sound more like his session work on Bowie’s ‘Life On Mars?’ than his more grandiose works with prog legends Yes. A stately take of ‘Baby Blue’ is dressed with extra fuzzy guitars for a hazy 60s mood and has the addition of a counter vocal from Matthew Sweet, a man who naturally fits the Badfinger mould really easily. It doesn’t try to be clever or change things up too much; Sweet obviously recognises he’s involved with a tune that couldn’t really be improved and although the results are merely “power pop 101”, in this instance, that’s perfectly good enough. Albert Lee’s distinctive guitar is very much underplayed on a recording of ‘Sweet Tuesday Morning’, but nevertheless, he brings something very pleasant to a very underrated and understated recording, as acoustic guitars and a soft country twang play out beneath an especially forlorn vocal. Naturally, Lee’s presence adds an extra Americana themed twang, but it fits the track perfectly. If your knowledge of Badfinger is limited to covers of ‘Without You’ and their 1969 hit version of ‘Come & Get It’, this is the kind of song that shows the huge breadth of Badfinger’s ever shifting style. Really pushing the blues angle, ‘Suitcase’ (featuring Sonny Landreth) is brimming with slide guitar and attitude. The playing is solid and the way Landreth challanges an electric piano for dominance throughout brings enough interest throughout, even if the end results are decidedly far removed from what most would consider “typical Badfinger”.

With regards to the remainder, unfortunately, things become decidedly…wobbly. A recording of ‘I Don’t Mind’ featuring The Buckinghams’ Carl Giammerese chooses to twist the original’s hazy pop into something that sounds like an iffy Grateful Dead tribute act – not for the better – lowering the batting average as it goes, as does an equally bland retread of ‘Midnight Caller’ featuring The Legendary Pink Dots where its decided that applying a bit of haziness is enough to make it different. These have nothing on this collection’s worst offenders, though. The two really bad recordings here cause irreparable damage to this collection, and considering ‘…Reinventing The Hits’ barely scrapes a half hour playing time, there honestly wasn’t any leeway for any obvious weakness. ‘No Matter What’ showcases a fantastic organ sound throughout, lending an old school vibe against some timeless harmonies. Likewise a hard guitar sound is applied to the brilliant and distinctive riff with great effect. It should have been so good, but the lead vocal pretty much kills everything. Vanilla Fudge’s Mark Stein may well bring a heavyweight organ to the fore, but he also brings the vocal subtlety of a man who sounds eight pints gone as he warbles tunelessly against a great melody, often sounding terribly out of place. ,..And nobody needed to hear Molland, a pick up band and Todd Rundgren croon their way through ‘Without You’ in the style of karaoke hardcases, or worse, like a cut price wedding band that just doesn’t cut it any more. The music is limp and cheap sounding; the various vocals appearing throughout are potentially worse. A brilliant guitar break from Rundgren really doesn’t balance out the audible pain of non-singers reaching for a climax that was already beyond their talents two decades earlier. These five minutes represent the worst reasons why re-recording classic tracks should often be avoided.

This collection is a particularly patchy affair, but thankfully, the good still outweighs the bad. That said, even with a handful of strong performances, it seems unlikely that even the most obsessive of Badfinger fans will find themselves returning to this album in the long term. With the Badfinger plus special guests set-up, Molland effectively becomes the star of his own tribute album. That alone makes it so much better than a cheap cash in on a past legacy, but isn’t quite enough to make ‘No Matter What: Revisiting The Hits’ much more than a curiosity, even with the very best of intentions.