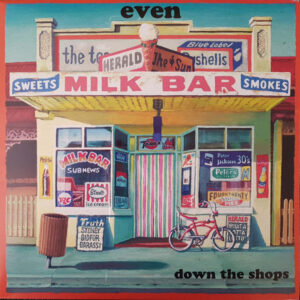 Cover tunes have long been a staple of the Even repertoire. Their live shows have always included covers among the self-penned classics, and they’ve even been known to host “theme nights” where their live sets are made up of covers that are in some way linked. Their eighth record is an Even cover tunes extravaganza, rounding up the various interpretations of other peoples’ material that’ve graced b-sides, compilations, tribute albums and other oddities over the years. In doing so, their 2021 collection ‘Down The Shops’ actually plays like a decent record in its own right, showing off the more frivolous side of the band while paying tribute to many of their rock heroes. It features everything from the obvious to the off-beat…and when it’s good, it’s a great record, serving up the kind of fun you’d hope for, considering Even have such wide ranging influences.

From the more obvious influences you’ll find a great cover of The Beatles’ ‘And Your Bird Can Sing’ where Even opt for a full on jangle. The results sound fairly like an old Matthew Sweet performance circa 1995 and its combination of chiming guitars and hazy, lazy vocals sound like the ultimate 60s derived treat. Also great, a recording of The Yardbirds’ classic ‘For Your Love’ stokes up a similar level of 60s treble, but goes an extra mile by applying a scratchier vocal and extra distortion throughout. This never really loses the spirit of Graham Gouldman’s original composition, but it does allow the listener to appreciate this overplayed tune in a new light. The rawer approach actually makes it sound more like The Sonics, and if you weren’t paying too close attention, it might even pass as buried treasure from the legendary ‘Nuggets’ box set. Another perfect fit for Even, The Kinks’ ‘Till The End of The Day’ is played absolutely straight, but still manages to sound like the kind of track that just never gets old. This particular recording (recorded for a 1996 b-side) captures a terrific guitar sound throughout and an especially punchy drum part. Making Even sound like the Aussie equivalent of The Flamin’ Groovies, it presents an authentic power pop sound that some bands could only dream of replicating. [For further listening, check out ‘Temperamental Flower’ from from 2011’s ‘In Another Time’, where Even go full on Kinks on one of their own tunes. There are plenty of brilliant musical hallmarks throughout, always suggesting a love of ‘Lola’ era Davies.]

The Posies’ ‘Solar Sister’ allows everyone to show off a range of harmony vocals against a brilliantly retro jangle. You Am I’s Tim Rogers once jokingly said that Even “made [his] favourite Beatles record”, so their love of The Posies at their most harmonious is hardly an artistic stretch, but even playing an Auer/Stringfellow composition straight, they sound like a power pop band of world beating proportions. Far more inventive, Blondie’s ‘(I’m Always Touched By Your) Presence Dear’ gets a brilliant makeover where the guitars are cranked and by transposing the pop elements to something a little punkier, Even rework the late 70s hit as if it were a ‘Hootenanny’ era Replacements banger. Its slightly shouty vocal is instantly rousing, and although the wall of overdriven guitar chords draws from tried and tested indie-punk sources that value bluster over flashiness, it’s still very much a highlight. Throwing a couple of massive curve-balls, a cover of Sex Pistols’ ‘Anarchy In The UK’ is played pretty straight – it seems like there’s a mere sidestep from Even’s preferred 60s jangle to an uglier UK punk riff and vocal sneer – and The Meanies’ ‘The Reason Why’ trades in a lot of the usual melody for some chunky sounds that come across like a mix of Mother May I and Grant Hart. Music scholars will surely raise an eyebrow at this particular choice, too; not for its musical ballsiness, but for the audacity of its place on an Even covers album, since Even’s own Wally Kempton was previously a Meanies man! Despite its dubious claim to be a cover and eligible for inclusion here, the performance is great.

As you might expect, ‘Down The Shops’ pays homage to a few Aussie bands, and the rendition of Sunnyboys’‘Show Me Some Discipline’ proves to be a particular highlight as it throws out a fantastic riff against some brilliant harmony vocals throughout. With vaguely psychedelic echo and retro swagger it seems like a perfect fit for Even, and by the time a hugely overdriven guitar solo drives the track towards its inevitable climax, this recording begins to feel like a classic in its own right. ‘Arthur’ – originally recorded by the Hoodoo Gurus and recorded by Even for a tribute album – supplies similarly instant thrills via a massive glam rock stomp and vocals worthy of old power pop records of the 80s. In terms of swagger, things don’t come much bigger; for fans of retro guitar sounds and massive hooks, this is a must-hear. Elsewhere, The Masters Apprentices’ ‘Living In A Child’s Dream’ (a 1967 track that shows off the Aussie equivalent of The Moody Blues and Moby Grape’) allows Even full rein to explore more of their late 60s obsessions. There’s plenty about the natural production sound of this particular recording and chosen guitar tones that could even pass for the late 60s if you weren’t paying close attention. This cover could even put The Masters Apprentices on the radar of a lot of UK and US listeners for the first time. Assuming that’s the case, then ‘Down The Shops’ has served a massive purpose for lovers of 60s garage rock and proto-psych sounds.

For long time Even fans, the opportunity to have these great tracks pulled together in one place will surely be welcomed. For those unfamiliar with the bulk of Even’s work, these recordings will supply a great introduction, despite their cover tune origins. Whichever way you look at it, ‘Down The Shops’ is a great disc; a celebration of a rock and pop past through the eyes of a band who deserve a bigger audience in the Northern Hemisphere. If you have any kind of interest in Aussie rock at all, then this release should be embraced wholeheartedly. Great stuff, indeed.