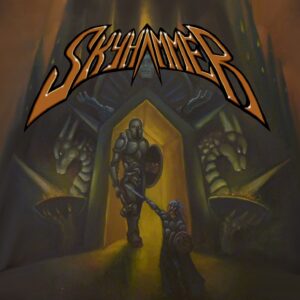 Over the decades, metal has gone through various changes and spawned a lot of different heavy – and increasingly heavier – subgenres, but sometimes, there’s a genuine pleasure in hearing a band thundering out a riff or six that takes things right back to basics. Australia’s Skyhammer bill themselves as “a traditional metal band” and within the first ten seconds of this self-titled EP, that traditional – and very 80s – aspect of their art is presented rather unapologetically. For lovers of the style, this will be a good thing, especially with the opening track showcasing some fab twin lead guitar sounds inspired by Iron Maiden circa 1984.

Moving into the verse of that opener (‘Beyond The Walls’), Skyhammer show how they don’t just plunder the studs ‘n’ leather sounds of the past once a really heavy double bass drum sound takes over. In terms of capturing the spirit of the 80s and fusing it with the best moments of ‘Shogun’ era Trivium, you really couldn’t ask for more, especially once guitarists Matthew Zipeto and Andrew Cutting start trading off busy, fretboard melting solos. Regarding vocalist Steve Labadi’s performance, it perhaps would have been better if he’d put in a little less effort. Throughout the number, he bellows at full pelt, even at times when a little restraint might have worked more effectively. Although his power and presence is impressive in his own way, he is clearly someone who prefers volume over technique – he often sounds like Blaze Bayley in a bad mood – which is something of an acquired taste. This never spoils the track, though, since from a musical perspective it captures a retro sound effectively at almost every turn.

…And so, the bulk of the EP continues in a similar vein. ‘It Rises’ tears at full pelt as if channelling Trivium at their heaviest while covering German power metallers Primal Fear, only slowing slightly to introduce a bombastic melody that sounds as if it had been partially inspired by Iron Maiden’s ‘Revelations’. Assuming you can make it beyond another incredibly loud vocal, there’s a lot here that’s fairly endearing in an old fashioned way. Rory Amoy’s drumming is absolutely fantastic; hearing him pounding away under a soaring lead break suggests the work of musicians who’ve worked incredibly hard to create metal with such an authentically old sound. Listeners who celebrate metal’s more 80s/traditional aspects will almost certainly find something to enjoy here. ‘Chains of Life’ veers a little too far towards sounding like a bombastic sea shanty, but thankfully never goes for full scale “pirate metal”. Thankfully, to balance out the bits that want to be Running Wild covering Iron Maiden, there’s a stronger hook that hints at a love for Roland Grapow, a couple of instrumental links where the rhythm section crank the speed to ferocious levels, and a slow, quieter interlude that takes in an unavoidable influence from some of Bruce Dickinson’s solo work. As always, if you don’t find yourself enamoured with the song itself, there are plenty of moments within the performance that’ll still catch the ear.

Unbelievably, the title cut ups the ante even further for sheer oomph. A melodic power metal riff underscores an insanely loud vocal, which in turn is joined by a screaming counterpart. With Skyhammer reaching for the extremes, it seems almost impossible that the music still has room to breathe. They know what they’re doing, of course, and as before, the arrangement – although showing the band at their heaviest – still features some brilliant touches, ranging from backing vocals that draw from battle metal classics, to an unexpectedly complex instrumental break where the galloping rhythms make way for some prog metal twists. The more complex musical mood allows Andrew and Matthew an opportunity to show off a few bendier guitar sounds over music that’s much closer to Threshold and Shadow Gallery than their beloved NWOBHM heroes and revivalists. It’s great.

Although most of this is really bombastic and old fashioned, it’s still worth an ear from the mildly curious for its choice of cover tune. In an inspired choice, these Aussie metallers take the old Kenny Loggins hit ‘Danger Zone’ (from the Top Gun soundtrack) and transform it from a likeable and bouncy pop rocker to a full scale metal workout. This would have been an easy transition on the surface thanks to the original featuring a relatively prominent guitar riff, but Skyhammer do a little more than merely heavy things up. The whole performance allows Rich Booth’s bass to be more audible, but the way he drives the verse with high octave lead notes is great, and his muscular fills add more musical interest, often lifting this above a metal banger. Good or bad, once you’ve heard these guys tearing through a much loved classic, it’ll never sound the same again. Having already proved their mettle for metal in the lead up to this finale, this shows a band who are more than willing to have fun…and it definitely makes the EP seem more rounded as a result.

Throughout this release, Skyhammer genuinely play up a storm. Their galloping riffs and thundering rhythms recreate so much of trad metal’s heyday with love and authenticity, it presents one of the most striking attempts at reviving the shamelessly retro style since Neuronspoiler released their ‘Emergence’ LP back in 2013. ‘The Skyhammer’ has its flaws,as most albums and EPs are bound to have – as mentioned, the vocal will be make or break for some listeners and some elements of the title track are a little too full on – but in the main, it’s got so much spirit and drive, you couldn’t possibly ignore it.