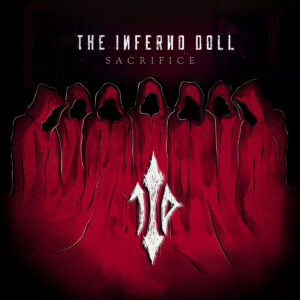 Given Vargas’s past, if you’re somehow expecting ‘Sacrifice’ to be full of bombastic – but ultimately boring – symphonic metal in the Nightwish and Within Temptation vein, you couldn’t be more wrong. The title track, which opens this welcome return, is especially bleak and challenging. A cold opening riff that repeats three notes combined with an occasional drone hints at a love of UK goth sounds of the 80s, and the way an operatic vocal joins an occasional Siouxsie-esque melody confirms it. As the melody progresses, it appears to take the listener somewhere even darker than before. At the point you’re expecting the next three minutes to be a brilliant exercise in minimalism, it takes an unexpected twist by adding insanely distorted noise – much closer to industrial sounds – and Vargas unleashes a huge black metal growl. Gothic metal has long been an inventive subgenre, but The Inferno Doll’s abilities to fuse Dead Can Dance with Cradle of Filth really hit the mark like little else. If that’s not enough, there’s time along the way for a bouzouki solo from guest musician Dawn Howard (aka D.), just to give everything an extra dimension. In terms of creating a first impression for the comeback release, things couldn’t be any more dramatic if they tried.

Scaling things back a little – at least at first – ‘Ghost Waltz’ does what it says on the tin, presenting a gothic folk waltz to set up a haunting theme in the most simple and direct way. A bright piano melody is used as opening bait before industrial beats flesh out a great rhythm. Laura’s lead vocals are clean throughout – opting for a dark quirkiness on the verse; reaching a full on cry on the chorus – but always carry a great feeling of presence. By the time the assembled musicians break into a dense riff for the track’s second half and she accompanies the doom with a shrill, wordless harmony and the brilliance in the intense gothic influences shine through at every turn. Finally, adapting her vocal to a more traditional sounding folk melody, a strong European flavour steers the number to a brilliant climax, showing off the assembled talents in a slightly more commercial fashion, but without losing too much of The Inferno Doll’s twisted appeal.

For listeners who may feel that ‘Ghost Waltz’ veered too closely to commercial symphonic and gothic metal sounds, plenty of consolation should come from ‘Land of The Lords’ where sledgehammer riffs and black metal growls battle for dominance across several bars before the listener has even the most basic measure of any obvious melodic root. Throwing in various horror samples, the intensities grow – as do nostalgic feelings for old industrial albums from the 90s – and the riffs continue unabated until Vargas adds a cold, clean voice making the best of a strong ascending tune. Including extra melodic death/black metal elements during the chorus and finally submitting to pneumatic ugliness and a sound that somehow fuses a Danny Elfman score with Isaahn, it becomes a masterclass in extreme metal. It’s a must hear for anyone with the vaguest interest in heavy music.

The Inferno Dolls’ commitment to interesting melodies throughout this EP is so intense, it really doesn’t matter if you are able to follow the narrative thread. In many ways, it’s the band’s love of a massive riff followed by the ability to lose yourself inside of a broad and theatrical vocal that makes it truly work. If approached in the right mood, this can sound like some of the best gothic metal you’ve ever heard; if approached with half a heart, it may well scare you to death. Whatever the outcome, it’s a short but ferocious listen that’ll leave an indelible mark – good or bad.

[Physical copies of the EP include a bonus remix of ‘Dollmation’ from the previous album.]