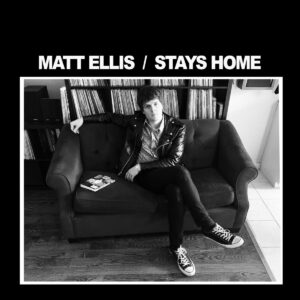 A DIY punk musician from Ontario, Matt Ellis spent half of 2020 in his bathroom. Armed with an electric guitar, a drum machine and his best sneer, he set about recording a bunch of Ramones inspired tunes quickly and cheaply. He obviously figured that with the world having succumbed to a pandemic, and a virus sidelining gigs and other activities, he – much like anyone and everyone – needed to do something to stay sane. The first recordings to emerge (the ‘High Risk Assurance’ EP from April 2020) showcased his love for Ramonescore in a very succinct and aggressive style. Its four songs were far from shy in sharing their love for Joey and Johnny (along with several key bands that came along in their wake) and in terms of home demos, certainly showcased a genuine talent for tapping into the core of what really makes good pop-punk so enduring – no matter how small (or even non-existent) the recording budget.

If anything, that EP’s follow up, ‘Matt Ellis Stays Home’ (May 2020) features four even better songs. ‘My Neighbourhood’s A Dump’ takes the riff from Ramones’ ‘Judy Is A Punk’, the hook from ‘Pinhead’ and the rawness of a couple of old Vindictives 7”s and creates a piece of familiar no-nonsense pop punk that’ll resonate will all fans of the style. There’s something in Matt’s gruff yet clear voice that’s also a perfect fit. Much like the previous EP’s ‘Poison Holiday’, which shamelessly applied bits of ‘Havana Affair’ and ‘Psycho Therapy’ to a couple of Matt’s own ideas, it’s all done with a knowing wink, but it’s all very good natured and despite being recorded in a bathroom, almost everything has a broad sound. Similarly, ‘Stay Home’ – a very obvious COVID-19 anthem, with lyrics concerning staring at the wall through boredom – shakes up an old Ramones riff (in this case, ‘Now I Wanna Be A Good Boy’ coupled with anthemic shouts that resemble a couple of other classics), while Ellis’s slightly gruff voice taps into something a little closer to the hardcore of D.O.A., possibly inspired by his Canadian roots. Its influences maybe glaringly obvious, but within seventy four seconds, this track pushes so many of the right punky buttons, home demo style.

The strongest of the four homages, ‘Monkey Brain’ takes the Ramones blueprint and supercharges it, very much making the best of the performer’s more aggressive rhythm guitar skills. That alone would place this above the rest of the material, but it’s the way he takes his vocal and performs in a way that’ll surely remind everyone of Dee Dee Ramone’s rarely heard razor edged voice that really makes the track. All things combined, this really does sound like an unearthed demo for the Ramones’ undervalued 80s discs ‘Too Tough To Die’ and ‘Halfway To Sanity’. Slowing down for the obligatory “Ramones Pay Tribute To Spector” intro, ‘Gonna Die Tonight’ kicks off with the drum beat from ‘Be My Baby’, coupled with a few broad guitar chords before Matt gears up for some high octane punk, where the main hook is derived from ‘You’re Gonna Kill That Girl’. Making sure it isn’t a straight rip (obviously, having grown a little in confidence since ‘Poison Holiday’) there’s time enough during this minute and a half to inject a few more pop punk chords against a vocal that that sneers with the underlying mood of boredom. Although it’s always obvious where the germ of this idea began, again, Ellis demonstrates how a few obviously recycled ideas can still deliver a huge amount of fun. …And at the end of it all, that’s probably how this release is best viewed.

The only obvious drawback here is that, naturally, punk with a drum machine doesn’t really work and, expectedly, the empty clanking rhythm track on these numbers can be a little intrusive at first. However, it’s worth remembering that this EP – like it’s predecessor and the ‘Halfway To Insanity’ EP which appeared on Bandcamp barely a month later – this recording was created in unnatural circumstances. With the world ground down by a virus and musicians unable to access friends and a studio, things became more DIY than ever and by having to stay home, Matt Ellis has certainly made the very best from some very limited resources.