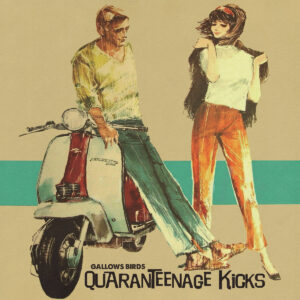 In the summer of 2020, the world was in a state of flux. People who’d normally be out at the beach or taking other vacations found themselves at home due to a global pandemic calling time on big social activities. That meant gigs were genuinely off the table, and with bands unable to congregate in recording studios, even the act of making records became more difficult. During lockdown, the members of Gallows Birds found themselves on different continents, but even with songwriter Travis Woods being stuck at home in North Carolina, vocalist Richie Holes at a loose end in New York and drummer Glenn Wellman living in South Africa, the miracles of technology allowed them to join forces…and their debut album was born.

Named after the circumstances which spawned its creation, ‘Quaranteenage Kicks’ is a little thin sounding in places – most of the songs are heavily reliant on a very trebly, 60s inspired guitar sound – but there’s very little about it that sounds in any way cheap or demo-like. In fact, there’s not too much beyond the title that would especially give away the members’ detachment from each other. Maybe the drum sound could be better, but that’s pretty much it. The ten songs sound like a band on the same page musically, even in the same place, most of the time; more importantly, the focus is on good old fashioned fun – something missing from that summer – with songs aplenty about the beach, cars and girls.

There’s a lot about Gallows Birds’ work that suggests the spirits of Brian Wilson and Jan & Dean had been sucked into Lookout Records legends the Hi-Fives. The music from numbers like ‘Crossing The Line’ with its punchy edges and razor edged early 60s twang could be straight off an old Hi-Fives LP. This kind of garage rock sass and mod-friendly buoyancy very much presents the retro heart of Gallows Birds on full pump: a carefree solo dances above a sharp riff and Holes’s slightly nasal vocal is impossible to pin a date upon. Better still, ‘Emily’ takes that core sound and boosts it with more of a power pop melody without losing the vinyl friendly sound and early 60s core. The sharpness in the rhythm guitar work is terrific; the band’s abilities to construct a two minute banger that sounds like something you’ve known forever, or at least something that will remind you of The Mr T Experience’s opinion dividing opus ‘Alcatraz’. Perhaps the only weak link is Wellman’s drum sound. It’s fine considering the circumstances in which this record was made, but with a mid-section reliant on heavy toms in the way it is, his playing doesn’t quite have the oomph you’d hope to hear.

Applying some solid power pop chops to the twang, ‘So Unhappy For You’ throws out a great chorus against a rhythm that’s often crying out for a full compliment of handclaps while the main guitar riff is augmented by the sounds of something inspired by end of the pier wurlitzer seaside memories. Musically, it’s a hugely retro affair – part sixties charm, part seventies power pop – but the sneer in the vocal often suggests something more modern. There are times on this track where Richie’s choice of delivery takes a lot from 90s pop punk – particularly the performances of MxPx’s Mike Herrera. Surprisingly, it never jars; if anything, it gives Gallows Birds more of a relatable edge. That’s taken to further extremes during the punchier ‘Someone Must’ve Nailed Us Together’, where the riffs come thick and fast, but the use of harmonies always keeps the power pop feel at the heart of everything and Gallows Birds manage to make an old Wreckless Eric number sound…tuneful. Also cool – and making no secret of the youth culture that inspired Woods to write these songs – ‘My Lambretta’ is a decent jangly pop-rocker that’s part mod, part surf and all attitude. With the verses bolstered by a world of oohs and a catchy chorus showing off a simple harmony, you’d never guess these guys had been victims of geography.

A cover of The Beach Boys ‘Dance, Dance, Dance’ exposes some flat vocals when the Birds’ bravely stretch for some falsetto action and the garage-ish aspects of their playing reinterprets an old classic in slightly too much of a ragged way. A better Beach Boys tribute comes with the self-penned ‘South For The Summer’ which suggests more love for the Wilson brothers, even if the chorus sounds far more like one of Joe Queer’s homages than the Beach Boys themselves. Whatever, it takes all of three spins before it becomes the kind of lo-fi pop anthem you want to hear again and again. ‘Back To The Beach’ attempts more of the same, but maybe achieves a lesser end result, but is still enjoyable if you’re the kind of listener who isn’t so cerebral. In terms of playing and making socially distanced harmonies truly sing, though, ‘GTO’ is the album’s real highlight, with Holes delivering a snotty lead vocal against some hard and fast power pop tunage that really throws a 60s lead guitar pastiche in the spotlight. The way that 60s music joins forces with enough “who-ah-oh-oh”s to rival both the young Elvis Costello and Ben Weasel is something of a genuine joy. In just three minutes this track provides a perfect snapshot of this band’s aural sunshine. Again, some listeners might just be cast back to Mr T.’s ‘Alcatraz’ or Dr. Frank’s solo LP, but this isn’t necessarily a bad thing.

In some ways, three cover tunes on a ten song album is two too many, but Gallows Birds take Graham Parker’s ‘Local Girls’ and genuinely make it their own by transposing the arrangement from a Nick Lowe-esque piece of pub rock into a faster, more garage based affair. The speedier verses make it sound like more of a natural fit with the Birds’ self-penned fare and although the chorus doesn’t scan too well, once you’ve adjusted to the new tune, it’s a recording that’s big on enjoyment. If nothing else, it showcases some tight riffs and some great musical taste.

Combining the sun-filled sounds of surf pop, the twang of garage rock and a pinch of pop punk urgency, Gallows Birds aim for fun above all else. Since fun was in short supply around the time these songs were recorded, you can’t really blame them. All wrapped up in under twenty five minutes, ‘Quaranteenage Kicks’ is a great exercise in low budget, big chorus greatness. If you’ve any interest in the twangier end of power pop, retro rock ‘n’ roll with a slightly punky edge or – most likely – used to be a Hi-Fives fan back in ’97, then this is for you.