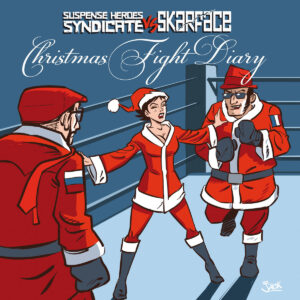 You might expect Skarface, being the veteran band here, to come out of this festive fracas as the winners but, unfortunately, both of their songs are decidedly subpar. ‘Petit Papa Noel’ does itself no favours by kicking off with a slow opening verse in the style of a cheesy Christmas crooner with out of tune vocals, but even once the track settles into a basic ska rhythm there’s still something amiss. The choppy rhythms seem lacklustre; the horns are flat and the woolly production values only serve further to make this feel like some kind of tossed off demo recording. Factor in a relatively tuneless, shouty, Oi! inspired vocal, and this honestly has nothing going for it at all. It’s almost as if the band just can’t be bothered. ‘La Fille Du Pere Noel’ is a massive improvement since it actually has a reasonable amount of bounce but, again, due to the end mix sounding so flat, at least half of its potential is lost in translation. Still, if you’re able to look past that, there’s at least a glimmer of a great track here. Working a jaunty rhythm, it has a decent sense of pace and the kind of sunny demeanour such a tune deserves. The riffs are solid, but never remarkable, so it comes as some consolation when the horns are put to good use when punctuating each of the vocal lines. Moving into the chorus, Skarface revert to their beloved shouty style, but it works far more sympathetically given that this number at least aims to be raucous, even if it never quite succeeds.

Unfortunately, at least fifty percent of the time, Skarface sound like they don’t really care. With that in mind, why should anyone else? Even with ‘La Fille…’ showing some promise, there’s nothing here that would make a first time listener venture back through twenty years’ worth of recordings.

Thankfully, salvation is at hand, and the two recordings from Suspense Heroes Syndicate are brilliant. The Heroes have been smart. They’ve assumed that the novelty of a Christmas release might just attract new listeners…and what better way to endear themselves further than to offer something already familiar? They’ve reworked some old Christmas classics in their own image, and not only is their choice of material fantastic, their performances have more than enough gusto to make up for Skarface’s terribly lacklustre approach. A tune known by almost everyone, the old Phil Spector chestnut ‘Santa Claus Is Coming To Town’ is redressed as a high octane ska punk workout. Evidently, it doesn’t take much to turn this into a ska banger, but faced with a recording where the horns sound as if they’ve been pulled straight from a Reel Big Fish LP, fans of the style will love it in an instant. Throughout a truly jubilant performance, the guitars shift effortlessly between muted, skank-worthy chops to a full metal-oriented crunch for the chorus, those horns call out brightly at every turn and the lead vocal – while wobbling between affected lower notes and a brilliant punky yelp throughout – is massively spirited. This would be the EP’s must hear, but with the ‘Merry Christmas’ medley, the band pulls an absolute master stroke. In three and a half minutes, listeners are taken through bits of the Ramones’ ‘Merry Christmas (I Don’t Wanna Fight)’ played as if SHS are Russia’s answer to Mustard Plug, before taking a turn through a sax solo that teases with bits of ‘Winter Wonderland’ before ending in a rousing ‘Feliz Navidad’. The way this flows is impressive – the band manages to link everything via brief passages where organs and handclaps accentuate the fun, and while there’s nothing to link the Ramones song with any of the more traditional fare beyond the subject matter, it all feels so natural. This is, without doubt, one of the best Christmas recordings you’ve (n)ever heard – an alternative Xmas classic.

When a release only clocks in at ten minutes, it’s a little disappointing when half of it doesn’t hit the mark. However, since Suspense Heroes Syndicate bring two tunes worthy of any alternative Christmas playlist – and one of those could well be one of the best medleys ever – this EP is still recommended to ska fans everywhere. The cost of a download certainly wouldn’t be money wasted.