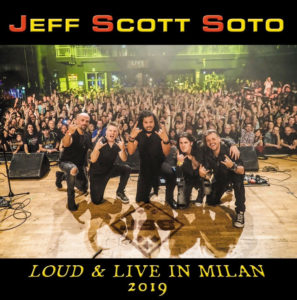 …Until you reach somewhere near the end of the second track. Set opener ‘Drowning’ and the subsequent ’21st Century’ can already be found on ‘Live At Firefest 2008’ and 2009’s ‘One Night In Madrid’, but they come across with such a vigour at this show that, assuming you’re a big fan, you’ll get really caught up in the performance. ‘Drowning’ opens with a flurry of guitar notes, to the delight of the small audience, before launching into a much dirtier take on the track that both the studio cut and previous live performances had allowed. Hitting the chorus, more melody shines through with some pitch perfect harmonies contrasting Jeff’s own pleasingly ragged style and with the guitar work coming a little closer to his heavy SOTO band project, it’s a great slab of hard rock. Likewise, ’21st Century’s funkier mood is subjected to some brilliantly dirty guitar work lending a contrast that’s both a powerful and listen. For someone thirty five years into a professional career at the time of recording, Jeff’s voice sounds so much better than some of his peers.

Further into the set, ‘Lost In The Translation’s ‘Soul Devine’ is presented in a fine and chunky fashion allowing guitarist Leo Mancini a chance to cut loose, but for those who love a purer AOR sound, a medley of ‘Believe In Me’, ‘Look Inside Your Heart’ and ‘Eyes of Love’ will surely be the performance highlight. Casting aside some of the more forceful aspects of the earlier performances, Jeff’s voice really shines through and in more than a few places, it actually sounds much the same as it did twenty years earlier. If that isn’t enough, this set also includes a really rousing ‘I’ll Be Waiting’ (one for the old Talisman fans) and an appearance of Animal Drive vocalist Dino for a duet on ‘Stand Up’ – an unexpected treat. Using this tune from the Rock Star soundtrack to close a great set, the band offer their heaviest sounds of the night. It seems a little at odds with everything they’ve played so far, but the audience seem more than appreciative at witnessing something so unexpected.

The only real downside is that the set is incomplete. Jeff supposedly played a for a full hour on the night in question, but since this recording only runs to forty-one minutes, it obviously loses a huge amount of material. By the time you’ve really started to enjoy yourself, it’s all over. That alone might have made ‘Loud & Live…’ seem less important than 2002’s ‘JSS Live At The Gods’ (a disc that digs much further into Jeff’s past) or ‘Live At Firefest’ (a much longer set that celebrates Jeff’s great AOR records of the early-mid 00s), but somehow ‘Loud & Live…’ more than holds its own. When the audio manages to convey a real atmosphere and even be a little heavier than previous live sets in places, it actually becomes an important document for those not lucky enough to be there.