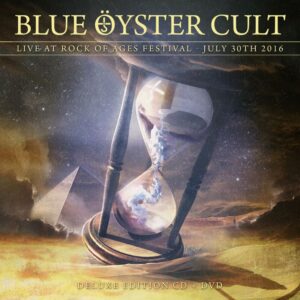 Whilst the excellent Ramblin’ Man set seems to be consigned to fans’ collective memories, fortunately, their rare appearance on German soil was captured for posterity. Although the prosaically titled ‘Live At Rock of Ages Festival 2016’ is the fifth Blue Öyster Cult live release to hit the shelves in under twelve months, it’s also a welcome one. In a little under an hour, the band thunder through a super-charged ‘Greatest Hits’ oriented set. By focusing mainly on the classics, BÖC very obviously understanding the big difference in the needs of a festival crowd vs an audience of devoted faces at their own gig – Dream Theater should take note – and right from the opening bars of ‘This Ain’t The Summer of Love’ its clear they’re on great form. ‘Summer’ has the odd vocal wobble during the chorus – as is typical for the era – but, overall, with Buck’s guitar high in the mix, is a much better performance than you’ll find on the ‘Agents of Fortune Live’ release. Things generally notch up a gear or two for a fine performance of ‘Golden Age of Leather’. The fast sections of the track show off some great vocal harmonies that are obviously still very “live”; the Beach Boys inspired middle eight is played to perfection and the rest of this epic piece is home to some brilliant rough and tough lead guitar fills. Overall, although it sounds like the work of a band who’ve played this two thousand times, they never sound as if they’re going through the motions at any point. The opening a cappella refrain might be subjected to some assistance in post-production, but with a veteran band such as this, it’s to be expected. After all, a little tidying after the event never stopped Thin Lizzy’s ‘Live & Dangerous’ being one of the best albums ever…

With set regular ‘Burnin’ For You’, BÖC treat the crowd to one of their AOR-centric tunes and although they occasionally sound like a cruise ship nostalgia act, the audience are certainly more than appreciative. Between a great vocal and a tight rhythm section, it more than holds its own even if it’s a couple of the rockier tunes that win out on this occasion. Things are cranked up again for ‘OD’d On Life Itself’, with Buck throwing out massive, chugging chords while Eric Bloom summons a distinctive, curly vocal. Listening back to the recording, it isn’t necessarily a set highlight – that honour definitely goes to ‘Golden Age’ and ‘Buck’s Boogie’ on this day – but it almost certainly sounded better for those fans lucky enough to be present.

At the set’s mid point, the band really hit their stride with a slightly ragged ‘ME 262’ leading into an extended ‘Buck’s Boogie’, which reinforces the live aspects of this release by keeping the various bum notes that Donald Roeser manages to hit during the riffs first couple of cycles. By the time he reaches the call and response with Richie Castallano on keys, it’s much smoother all round and his bluesier tones during the second solo really shine through. Pulling towards the climax, you get the feeling that this line-up were at their peak, and hearing the familiar piece underscored by Kasim Sulton’s fluid bass work – much jazzier than Danny Miranda’s earlier bottom end presence had been – it really shows how well these musicians had jelled. Finally reaching the ‘Cat’s Squirrel’ riff and pummelling it for all its worth, sound every bit as good as they had some thirty years previously.

With BÖC’s live shows from the era already well documented by three or four other archive releases, what does this set offer the big fan? Not too much in the way of audio – although most of these performances are great, you’ll have very similar on other discs – but the inclusion of a couple of slightly more obscure lends a subtle difference. Looking back to the ‘Heaven Forbid’ album, ‘Harvest Moon’ is performed with precision and although it never quite conjures the excitement of the hits, some decent harmonies and a brilliant ringing guitar sound make it better than its studio counterpart. ‘Lips In The Hills’, meanwhile, goes straight for the skull with a combination of high octane rock ‘n’ roll riffs and shouty narrative. The studio recording doesn’t really do the arrangement justice; the extra oomph applied here makes it sound like a genuine BÖC classic rather than a piece of lesser-known album filler.

Rounding out a well curated set, ‘Last Days of May’ takes on a form of an extended ten minute jam where a couple of vocal missteps are more than made up for by some terrific lead guitar work throughout (it’s very good, but the version from the ‘45th Anniversary’ release is better); ‘Godzilla’ appears to be a genuine crowd pleaser despite never rising beyond several dozen other live takes you may have heard, and the omnipresent ‘Don’t Fear The Reaper’ ensures even the non-fans present at the show are left with a great memory.

Despite now owning more BÖC live albums than you ever thought possible (or necessary), you’ll still want this if you’re a big fan – if not necessarily for the music, the bonus DVD makes ‘Live At Rock of Ages’ a welcome release. The daylight setting and tendency for slightly flat visuals makes it a no-frills affair, but it’s still nice to have. In some ways, it’s a set that’s potentially more appealing to the casual admirer. The shorter playing time more than works to its advantage: there’s little time for unnecessary banter and no padding from audience participation – just the sound of the band approaching something like top form. Whichever way you approach it, though, this is a great archive release that should appeal to a broad spectrum of BÖC’s fans and supporters.

Read a review of the 45th Anniversary Live release here.