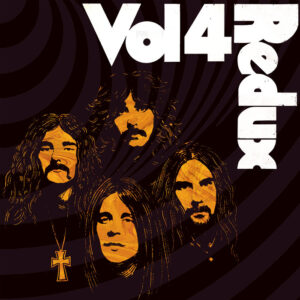 Approximately six weeks later, fans got another dose of the studio-based Zakk Sabbath when the band made an appearance on yet another Sabbath tribute, this time celebrating the almost as legendary ‘Vol 4’ LP. Here, listeners can experience Zakk Sabbath in even better form. Taking the original album’s closer, ‘Under The Sun’, the band really flex their heaviest muscles by injecting severe doom metal traits into the intro, before launching headfirst into a fuzz-driven and repetitive riff. The arrangement very quickly asserts their power trio stance, while Wylde’s chosen vocal comes closer to sounding like an actual Ozzy tribute than ever before. This would be a recommended listen based on those factors alone, but Zakk Sabbath really excel when it’s time to rework the track’s faster mid section. Of particular note is drummer Joey Castillo’s contribution: he absolutely decimates his kit when laying down the main groove, and when called upon for the unaccompanied drum fill, he sounds like a man who could just about play anything with extreme precision. Pulling into the close of the track, Wylde takes Iommi’s lead guitar break and gives it a severe kick up the arse, throwing out various metallic runs while the rest of the band continue hammering through a mid-tempo riff. The rest of ‘Vol 4 (Redux)’ could be rubbish, but it would still be worth picking up on the strength of this track. It’s better than anything on ‘Vertigo’…

Thankfully, the rest of this tribute disc isn’t rubbish and there’s even one cover among the other nine performances that outdoes Zakk in terms of both quality and greatness. Throughout these near fifty minutes, there are several terrific stoner and doom bands contributing fine Sabbath reworkings – both traditionally and in their own image – with lots of great music waiting to be enjoyed. Only one reinterpretation is destined for the skip button and Tony Reed’s reimagining of ‘Laguna Sunrise’ earns that honour. On the original LP, Iommi’s short instrumental came close to being filler, but at least his 1972 recording had warmth and charm. Reed’s lo-fi take sounds like a home demo where the ex-Treepeople man tinkers with a mellotron and an oboe sample. Naturally, the beautiful melody is still obvious, it’s just that the rendition is so…cold. If you didn’t know better you’d say it was an unfinished sketch or, at best, something used as an intro tape for a band’s live show. Whatever, it doesn’t hold any interest beyond a second listen.

Moving on, everything else is good to great. After Zakk Wylde, this comps other “star contribution” comes from Sleep’s Matt Pike who has taken on the ‘FX’ interlude and twisted it into an almost unrecognisable shape. Radio samples open the track with spoken voices; Pike’s overdriven guitar drops in odd squalls of sound, as he fades in and out with snatches of other Sabbath riffs before dropping the divebomb guitar riff from ‘Iron Man’ and disappearing into the ether. To be fair, the original ninety seconds of feedback and echo gave Pike both nothing and everything to work with. By using that as a springboard and adding various teasing melodies from other pieces that aren’t on ‘Volume 4’, he actually creates something entertaining out of almost thin air. Obviously, if you’re looking for a song of any kind, you’ve come to the wrong place, but if you know the original ‘Vol 4’ very well, you’ll almost certainly find this sound collage interesting.

Also thinking outside of the box, High Reeper take the piano ballad ‘Changes’ and reinvent it as a heavy stoner workout where dark, doom laden riffs borrow heavily from Kyuss and Crowbar while occasionally dropping in a snatch or two from a Sabbath tune along the way. Natural and clean vocals are a perfect compliment to the heavy sound and while the lyrics don’t always entirely scan, the band deserve high praise for making one of the album’s best known numbers truly something of their own. ‘Cornucopia’ – arguably one of ‘Volume Four’s true deep cuts – is left to Atlanta noise rockers Whores who really add weight to the heavy number. Their chosen production values placing focus on a distorted vocal and sludge-oriented guitar work are a natural fit for Sabbath; a howling bluesy lead has a great presence in a couple of places and the general commitment to sledgehammer riffs is to be applauded. Although their performance is great, the bleakness throughout more than highlights that ‘Cornucopia’ is, perhaps, not Sabbath’s finest five minutes. Any fault, however, lies within the source material rather than Whores themselves. Although ‘Vol 4 (Redux)’ offers better listens, there’s still a lot to like here and it sounds especially good when played back at volume…obviously.

Representing the Sabs at their most confrontational,  Thou’s reading of ‘Wheels of Confusion’ is especially abrasive. The opening riffs take a sidestep from doom to the garage-based sludge of Tuskar, before settling into the familiar and repetitious riff known by all, only to distort that almost beyond recognition. Instrumentally, this band takes no prisoners. Further ensuring their abrasive and heavy sound makes an impression, it’s coupled with a husky lead vocal that’s more suited to black metal material, yet given time to tune in, it sort of works against a sludgy, doomy sound too. More interesting is their approach to the chorus section where that voice is complimented by some clean singing, creating a great alternative metal sound. Thou are at their strongest when working instrumentally, though, and for this track’s more groove laden mid section, guitarists Matthew Thudium and Andy Gibbs add plenty of weight to the material in hand. Taking a more melodic stance, Maryland’s The Obsessed play ‘Tomorrow’s Dream’ in a powerful, straight up stoner style that combines the sounds of ‘…Sky Valley’ era Kyuss with a harsh vocal. The voice – hovering somewhere between a Southern Rock shouter and unrefined stoner god – could offset the melodic core with its rough ‘n’ ready qualities, but there’s enough power in the performance to ensure its a decent foil for the riffs, which often carry a brilliant distorted hum. If you’re into a classic stoner sound, you’ll want to hear this.

Likewise, stoner fans will glean a lot of entertainment value from Green Lung’s reworking of ‘Snowblind’ where the classic Sabbath traits are polished up with a more melodic edge and twin lead guitars and an old school Hammond organ are on hand to flesh out the arrangement in a more interesting way. There’s something about Green Lung’s old fashioned sound that calls back to obscure Danish bands like Ache; once that’s combined with a classic riff or two from the Black Sabbath back catalogue, it results in a very potent sound all round. Those looking for something more left field should head straight for the version of ‘St. Vitus Dance’ which trad metallers Haunt play at speed. Trading in the distinctive Sabbath sound for something closer to thrash metal peppered with twin leads and jagged edges, this cover really lends this album a feeling of variety. With tight playing and some tough production values, this would hold up as a classic metal track on its own merits if you didn’t know it were a cover. Occasionally, Ozzy’s old vocal melodies come through, but that it… Like the version of ‘Changes’, this really is a new and inventive take of an old favourite.

Outshining pretty much everyone, Arizona two piece Spirit Adrift offer an absolutely unmissable take on ‘Supernaut’ where the riff is played in fantastically fuzzy tones and the vocals are a perfect fit. With a grubby production style drawing attention to an almost other-worldly quality to the performance and some fine lead guitar work absolutely cutting through everything, it’s a fantastic listen. Unafraid to put their own stamp on this especially durable track, a mid section ushers in a few Latin American rhythms and a furious lead guitar adds more anger to the climax than Tony Iommi surely would have imagined. This is certainly something you’ll want to add to your ever growing list of favourite Sabbath covers.

If you’re the kind of person who loves covers and well curated tribute albums, then this is a must-hear. Obviously, ‘Vol 4’ isn’t quite as good as ‘Master of Reality’, but it stands proudly as one of the five or six “true classics” within the Sabbath canon and most of the artistes assembled here really do bring something of interest to the material. Between Zakk Sabbath, Green Lung and Space Adrift, it would’ve been worthwhile, but throwing great covers by High Reeper and Haunt into the bargain too, ‘Vol 4 (Redux)’ becomes a collection that a broad cross section of stoner metal fans should find entertaining. Highly recommended.