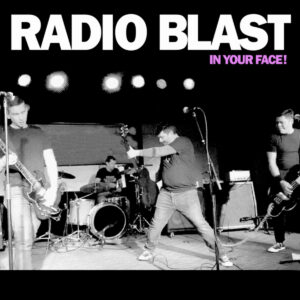 New York punks Radio Blast are one of those bands that wear their influences proudly. Not only does their brand of timeless pop punk owe a huge debt to the sounds made by Ramones back in the 70s, but almost everything they do suggests a massive love of Screeching Weasel. Their band name comes from one of Ben Weasel’s most classic songs; the artwork used their 2019 EP ‘Let’s Rock’ that bears a striking resemblance to the first edition of SW’s ‘My Brain Hurts’ and even the slightly off key backing vocals on that EP’s ‘Teenage Crush’ could’ve been directly inspired by any number of Weasel songs. What this means, of course, is that fans of the genre know exactly what they’re in for…and Radio Blast are yet another great band in a very long line of Ramonescore acts that value catchy hooks at almost every turn.

Their 2020 EP ‘In Your Face!’ offers another four punk fuelled bangers that work to a strict formula, but also shows Radio Blast to be taut musicians with a real mastery of their four chosen chords. The title track comes even closer to being a Ramones tribute than ever before, thanks to a flatter production sound and a riff that could easily be lifted straight from Johnny and Joey’s ‘76 debut. A bratty vocal interspersed by some particularly pointed “hey”s quickly sets up the number as a no-nonsense affair, while the riff that was so quick to embed itself during the intro continues to impress with its obvious homage. A case of a recording that captures a pure energy, it’s the sort of track that is enjoyable for fans and first time listeners alike…and a guest appearance by Boris The Sprinkler’s Rev Norb as a radio DJ just adds to the fun. ‘She’s A Cannibal’ takes a similar musical stance but, if anything, offers a few harder riffs. “I should’ve realised she wasn’t quite right” yelps frontman Kaspar as an opening gambit, quickly setting up an ominous tale while the rest of the band go about their business as usual. What could’ve been yet another punk song from the “wrong relationship” oeuvre becomes something more distinctive as a horror themed lyric adds a really quirky slant. Although, as is often the case with Ramonescore stuff, it’s the authenticity of the music that wins out above all else, it’d take a hard heart not to be amused by this tale of woe that dares to take something akin to an old Misfits trope and put it through the Groovie Ghoulies ringer for some extra cartoonish fun.

Released as a digital download ahead of the EP, ‘Boy With The Six Pack’ captures Radio Blast at their most pure. The riff falls somewhere between Ramones’ ‘Pinhead’ and ‘I Don’t Wanna Go Down The Basement’, while both the production values and vocal sneer draw a more influence from Screeching Weasel than ever before, with a couple of interjections coming really close to a couple of ‘Television City Dream’ tracks. Everything closes with ‘Teddy’, a punky workout that mixes another old Ramones riff with some harsh punk ‘n’ roll lead guitar and a shouty refrain that takes the mechanics of Ramones’ ‘Psycho Therapy’ and twists it into something closer to classic Screeching Weasel and Manges fare. If you’ve enjoyed everything Radio Blast have offered so far, this adds another couple of minutes’ worth of no-frills pop punk excitement.

Radio Blast’s ‘Let’s Rock!’ EP was good – it definitely set the stage for them being a band to watch out for – but this is much better. Yes, the influences are predictable and, yes, you already own two hundred records that sound almost exactly like this, but when Ramonescore sounds as good as it does here, owning one more won’t hurt. In a little over eight minutes, ‘In Your Face!’ brings a near-perfect listen and is further proof that good pop-punk – predictable or not – never gets old.