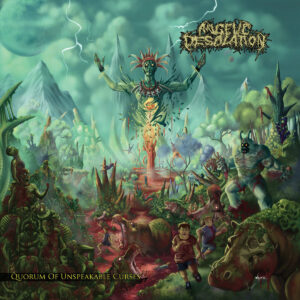 ’Cyborg Vampire’ wastes no time in wheeling out the extreme pneumatics, but maintains extra interest by mixing the speed driven riffs with a few progressive twists and nods to old school thrash.  In doing so, it only takes a couple of verses before the band’s instrumental talents are obvious.  At the point that things are on the verge of becoming a little predictable, the traditional death metal growls give way to black metal infused rasps while, musically, a much harsher guitar tone rises up to add extra extremity.  When returning to the more traditional death metal riffs, the track appears to repeat itself, but that doesn’t necessarily mean things are any less interesting during this second cycle: there’s plenty of opportunity to marvel at the frantic pace guitarist Matt Markle is able to hammer his fretboard.   Much more accessible all round (especially for a first time listener), the amusingly titled ‘Necropotamus’ applies a flawless death grunt to a brilliant groove metal riff at the outset – showcasing Desolation as if they were a more intensive version of early Lamb of God – before switching to faster, more ragged sounds in a progressive death vein.  Throughout the track, the rhythm section are especially on point. With an impeccable tightness and a few quirky stops, they ring the arrangement for every bit of complexity, while frontman Jay Medina gleefully dances between guttural roars and demonic retching, almost becoming extra instrumentation himself.  In terms of keeping death metal fresh, this is both impressive and exciting.

Joining the two original compositions, a spot-on cover of Decapitated’s ‘Names’ shows off more of Max Thunder’s flawless drum skills as he moves between trigger style and Suffocation-influenced pneumatics and a more jagged thrash groove with ease.  At the track’s most uncompromising, Desolation’s skills within death metal’s more rigid frameworks are absolutely flawless. This track’s sudden shift into something more melodic – a barrage of very European and very 80s twin lead guitar sounds – also shows how comfortable they are when tackling traditional metal sounds, even if their own work rarely seems to call upon such things.  In terms of cover tunes, it might have been nice to hear a little more of Angelic Desolations own twist, but perhaps their reason for covering this wasn’t to change or update, but to pay tribute to a core influence – in which case, they’ve already done an amazing job.

By throwing a cover tune in with the originals, genre fans are given a more familiar entry point to the Angelic Desolation sound, but impressively, the presence of a cover tune never outshines the band’s own work.  At almost every turn, this band more than signify themselves as an underground act that’s a cut above.  Between some timeless death metal aggression and truly impressive time signature mangling, this EP packs a hell of a lot into approximately twelve minutes.  Obviously, it won’t win over anyone who isn’t already half way into the death metal style, but for those who are, this is definitely a recommended listen.