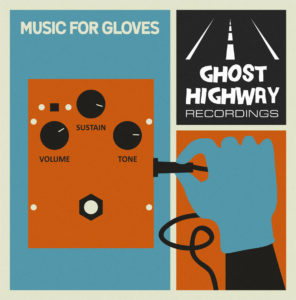 Purveyors of a whole world of pop punk and power pop music, Spanish Label Ghost Highway Recordings will be best known for distributing records by The Dahlmanns, Bullet Proof Lovers and Electric Frankenstein. Their contribution to a series of charity releases ‘Music For Gloves’ not only gives a quick insight into the label’s wares, but offers fans a few previously unavailable gems for a good cause.

Of the biggest interest is a previously unreleased live recording by Kurt Baker Combo. ‘Baby’s Gone Bad’ was a highlight from their 2016 LP ‘In Orbit’, but in it’s live guise, it comes with much bigger teeth. Captured at the Punk Raduno Festival, this recording really pushes Baker’s distinctively curly vocals to the fore and the slight wobble that’s occasionally present during the chorus reinforces any ideas that this is a performance with a lot of energy. come with an extra sneer Most importantly, the song appears to be taken at a faster pace than its studio counterpart, which gives guitarist Jorge Colldan an extra buzz when it comes to his lead break. He’s placed quite low in the final mix, unfortunately, but not so low that his work can’t be appreciated.

Opting for some good old school thrills, the previously unheard ‘Que Me Ingresen Ya!’ by Spanish punks Gibones is just brilliant. By borrowing an old Sex Pistols riff, the song has an instant familiarity, but it’s actually marriage of some very chunky guitar sounds and the kind of vocal that recalls seminal works by Fear that leaves the strongest impression. In terms of all round toughness and no nonsense attitudes, these guys sound like great players. As is often the case, the lyric being in Spanish proves that punk has no real language barrier when it comes to enjoyment and this track’s repetitive hook is definitely one of this download’s highlights.

Lovers of cover tunes might enjoy a fairly synth heavy version of Devo’s ‘Girl U Want’ by Munlet. This Spanish act wisely decide to play things straight musically, but a female vocal and lyric translated into Spanish (‘El Ser Que Quiero’) sets this apart from any other versions of the song you might have already heard. Yes, it’s fairly loyal to Devo’s original work but a couple of spikier guitars enhance it’s edges and the Spanish lyric definitely makes it seem like a valid collection filler. It could even be the best cover of this well known tune. It’s certainly much better than either Robert Palmer or Soundgarden’s previous attempts at bringing it to different crowds.

More like filler material, an acoustic version of Danger’s ‘Everyone Has A Price’ is pretty rough. The acoustic guitars sound oddly tuned and the fidelity of the recording has all the sheen of a Guided By Voices rarity. …And yet, it’s still obvious the strong melody that’s struggling for dominance has something: there’s a basic nod to classic power pop somewhere in here that reminds you that the original, full electric power-pop-punk tune that can be found on the band’s 2020 LP ‘Good Times Overload’ is a genuine banger. For those who’ve already got that album, this acoustic track will make more sense. If you’re coming to Danger for the first time via this download, don’t be put off – make sure you check out ‘Good Times Overload’ at the earliest opportunity.

So, with three great tracks from four great bands, Ghost Highway’s ‘Music For Gloves’ is an important download. More important than the music itself is its reason for being: all proceeds from the download will help provide protective gloves for hospitals in Spain – a vital helping hand during the Covid-19 pandemic.

You can grab your download for €2 from the official Bandcamp page. The whole thing can also be streamed below, but it’s so cheap, surely it makes sense to pick up a copy of your own for keeps…?