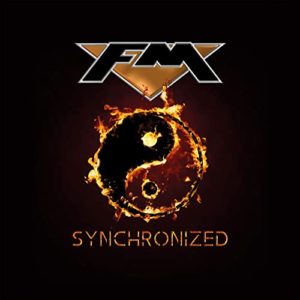 Their 2020 release ‘Synchronized’ shows no sign of FM even being tempted to turn in an average contract filler. With a couple of the stand-out tracks introducing a very American sound and coming a little closer to Steve’s work with Lonerider and plenty of huge melodic rock sounds throughout, there’s a great deal for both old fans and new listeners to enjoy. Of the more Lonerider influenced tunes, ‘The Best of Times’, especially, could be taken from the Paul Rodgers back catalogue, with its solid mid tempo riff, semi-acoustic edges and huge, soulful vocal. While Overland very much carries this piece with a very confident air, full credit should also be given to guitarist Jim Kirkpatrick who shows an ability to choose the right solo for the job in hand, as he fills a few bars with a melodic bluesy flair, and also to keyboard player Jem Davis, whose old style sounds really flesh out the track and lend more of a retro feel. This is a superb number – one that possibly eclipses the best tunes on the previous two (proper) FM releases. A bluesy ballad ‘Angels Cried’ also comes across like “FM covers Bad Company” but, again, this provides a brilliant vehicle for Steve’s voice while a warm bass and understated piano give life to a great tune. Stylistically, it’s very different to most of the record, but a familiar voice will be enough for most to recognise this as FM. …And if that’s not enough, a few Def Leppard-esque backing vocals (both heavy on the filters and cheesy charm) should make it more than obvious.

For those who love the band’s old 80s material, the spirited pop-rock of ‘Change For The Better’ shows a band who sound genuinely inspired. A bouncy and rhythmic verse that’s big on clean toned guitars and the kind of melodies you might find on an old John Waite LP sounds great, before slowing to introduce a grander pre-chorus that heads into a simple hook that could have been kicking around since the ‘Tough It Out’ days. It isn’t anything new, but it could become your new favourite FM tune…at least for a while. The title track offers a chunkier riff throughout and although bigger on bass and overall muscle, musically speaking, it’s Overland that stands out once more, taking it all in his stride and sounding especially good when using his big voice to drive a great pre-chorus. Synthesised horn sounds on the actual chorus and the odd Art of Noise-esque parp are somewhat of a mis-step – always guaranteed to cheapen the end result – but that isn’t enough to derail things completely. With another fine guitar solo, this time a little meatier and longer than most, and a brilliant hook, the tune still holds its own.

‘Ghosts of You & I’ gets off to an unsure start due to the presence of opinion-dividing programmed drums, but after the opening verse, everything settles down and grows into a superb ballad. Overland stretches his vocal in a very natural way against a fine piano melody, before the chorus drops into something that sounds like a thousand late 80s power ballads. It doesn’t challenge FM (or their devoted fan-base) and in many ways could be interchangeable with material from the previous couple of albums, but it more than shows off this AOR powerhouse, especially once Jim steps up with a short but impeccably played solo. Another stand-out, ‘End of Days’ is a terrific, no-nonsense AOR workout that builds slowly with some great, muted guitar sounds – a technique that Kirkpatrick also uses to underscore a great chorus – and makes an instant impression with the kind of huge feel-good sounds that FM have long made their trademark. of their best material. There’s also something about this track that provides a very welcome reminder of Pete Willis’s largely forgotten Roadhouse project, and in short, it’s near perfect melodic rock: it’s big, it’s shiny and invites you to sing loudly like no-one is listening. In many ways, when it comes to this kind of rock, that’s all you could ask for.

Elsewhere, ‘Pray’ takes a voyage into slightly tougher territory. At first it seems as if it is trying a little too hard to impress with Pete Jupp providing a punchy rhythm on a disjointed verse, but given time to settle, it’s another fine melodic rock track that shows how and why FM have stayed in the business for so long. ‘Broken’ comes with a great mix of melody and swagger and revisits a riff that has powered a dozen AOR tunes (usually called ‘Don’t Walk Away’), but still manages to sound thoroughly enjoyable even though you’ve heard it a thousand times before – and even from FM themselves. While neither could probably stake a claim as being FM’s best tune this time around, both retain enough charm and melodic appeal to help ‘Synchronized’ come close to being an essential listen.

While ‘Synchronized’ very often plays like the best moments from ‘Heroes & Villains’ and ‘Atomic Generation’ combined, its belief in the tried and tested ultimately adds to its overall strength. It’s amazing to think that a band so far into a career could put out an album so bristling with life and still sound like they’re actually enjoying themselves, but – a couple of moments of synth brass aside – this record really is that good. Whether you’re a committed FM fan or casual listener with a love of old style AOR with massive hooks, this is a highly recommended disc.