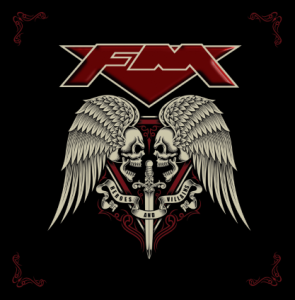 Since reforming in 2007, UK rockers FM have been on a roll.  Each of the releases following a twelve year hiatus have reinforced why the band are much loved in melodic rock and classic rock circles.  Boasting a dozen strong songs, their ninth studio album ‘Heroes & Villains’ is a very welcome addition to their catalogue.

Like so much of FM’s work, the bulk of the material sits closer to retro hard rock than the purer AOR sounds of their earliest releases ‘Indiscreet’ and ‘Tough It Out’. This only serves Steve Overland’s vocal style too well, of course; unlike some of his peers, here is a man whose voice remains almost as good as ever, the passing years giving it a real maturity.  For a great example of the veteran rock band’s musical stance at the beginning of 2015, look no further than the swaggering ‘Shout It Out’.  On the verses, there’s a quasi-funkiness to the groove, with rhythm guitars ringing crisply, over which Mr. Overland stretches each line in a manner which would befit Paul Rodgers.  The main riffs are decidedly chunkier, while a scorching lead break displays Jim Kirkpatrick’s guitar playing style in a most unsubtle manner.  Equally fantastic, the rock-pop punch of ‘Shape I’m In’ employs a feel-good attitude and wall of harmonies that makes it hard not to think of ‘Waking Up The Neighbours’-era Bryan Adams in what’s arguably the disc’s most AOR-centric outing.  Bouncy rhythms are complimented by another great lead break and swirling keyboards to great effect.

A little less impressive but still great fun, ‘I Only Wanna Rock N Roll’ is certainly cheesy with its trashy sentiment, but the band still gives their all on a Thunder-esque stomper.  Dirty rhythm guitar lines pay a gentle homage to the Faces and other 70s rock befitting of the style, while the inclusion of a brief sax accompaniment near the track’s close is vaguely reminiscent of Mott The Hoople.  Overland, meanwhile, tackles each line with gusto – and while Danny Bowes will always arguably have the stronger voice – here is a man whose pipes are as tough and melodic as they ever were.  The more AOR-tinged ‘Life Is A Highway’ brings an instant classic to the by now sizable FM catalogue, blending studio-perfect harmonies and choppy rhythm guitars to create something for those sun-filled days.  The balance between lead and backing vocals shifts effortlessly; the lead guitars soar…and the chorus is guaranteed to stick in your noggin.  As perfect as it is, there are moments when it resembles Van Halen’s ‘Dance The Night Away’ perhaps a little too closely, but then, if you’re gonna borrow, it might as well be from the best!  Tackling more pop-rock akin to ‘Shape I’m In’, ‘Call On Me’ is a fine tune, honing in on a great staccato riff during the verse – finding everyone in good form – before exploding into an instantly lovable chorus.  If you’re already sold on FM, you’ll love this;  if you’ve somehow yet to be won over by the band, check this out – you won’t be sorry.

Elsewhere, you’ll find the band rallying against the tackiness of the tabloid press on ‘Digging Up The Dirt’ a sneering hard rocker with an impressive melodic rock chug, driven by a great riff and stomping drum line.  With a mid-paced approach, Overland gets to bend his voice around each word with ease, while a few filtered Def Leppard-esque backing vocals add plenty of charm.  Stoking up the melodic elements (and a couple more Leppard-esque tinges), ‘You’re The Best Thing About Me’ is classic AOR – easily a highlight here – brimming with melodic vocals and a staccato rhythm guitar settling somewhere between the Leps’ ‘Animal’ and ‘Hysteria’.  This track is almost worth the price of admission alone…  As a closing statement, the band have chosen something a touch more downbeat in the acoustic ‘Walking With Angels’.  On the whole, the number is perhaps this disc’s weakest since Overland doesn’t always have a voice that suits the more reflective tone, but generally speaking, it’s a thoughtful addition to the record, winding down after the selection of first-rate rockers.

With album number nine, FM prove they have nothing to prove any more.  Fans will know exactly what to expect at this stage, and ‘Heroes & Villains’ gives those fans plenty of reasons to rejoice.  A very strong offering from all concerned.