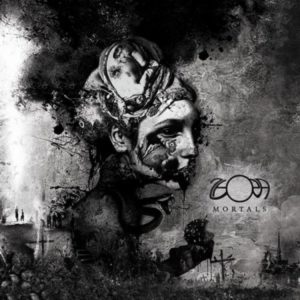 The subtle as concrete blocks ‘Coke Vulture’ could be one of zhOra’s best tracks to date, beginning as it does with a devastatingly heavy riff that takes the dirtiness of most sludge metal, but applies that to the speed and groove of ‘Sacrament’ era Lamb of God. With such a classic metal backdrop in hand, most bands would settle for that, but zhOra take things a step further and drop in a couple of interesting time signature shifts, keeping everything suitably edgy. Once Colin Bolger (ex-Revenant) adds a vocal, things intensify even more. His voice has a volume and presence that’s able to go toe-to-toe with the insanely heavy riffs at every turn and although his guttural, almost demonic roar won’t be to everyone’s tastes, in many ways his divisive talent sounds more assured and a much more natural fit with zhOra’s heaviness than before. The instrumental break is equally interesting in that a few of the chosen lead guitar sounds have a very old school tone. This is obviously at complete odds with the musical face zhOra have shown so far, but seems to fit very well. For those who might feel things are a bit on the fast side for a sludge band, the final section sets that right as zhOra slow to a doom-laden crawl with riffs closer to Conan, ensuring these five minutes pretty much cover all of the important bases.

If you can make it past that, then the rest of the album will seem equally impressive. In terms of taking a sludge-oriented sound into even less of a predictable territory, ‘Hellfire’ is a must-hear. A completely uncompromising three minute skull-crusher, the intro flaunts the purest hardcore/punk metal crossover sound, before exploring a fast-but-sludgy metal groove. Just as quickly as the band shifted between those two moods, its all change again for a more intensive verse’s worth of pure hardcore driven my death metal pneumatics. Intent on pummelling their audience into submission, Pancho O’Meara’s guitar work underscores a world of vocal anguish with something of a groove, before launching into a shrill, atonal lead that just ups the ante of intensity even further. Another hardcore riff reinforces the heaviness with an even punchier edge, before everything closes with a slow, grinding sound, finally conceding to something more obviously from the sludge palette. As Colin growls the title over and over, there’s no mistaking the fact that zhOra have truly meant business.

Another fine metal tour de force, ‘The Hollow’ is more concerned with more traditional doom and sludge moods, but Colin’s abrasive vocal style continues to set zhOra apart from most Melvins and Sabbath apologists. Musically, it plays a little safer (relatively speaking, of course) and in doing so, it’s definitely the album’s most accessible track. The hefty down tune and near-gothic stance takes in so much influence from the finest dark metal, while the howling lead guitars often show off more of a gothic mood. This gives the number a very heavy vibe, but also one where a few slower riffs have the ability to really pull in the listener. As with most of this album’s material, there is time enough for an important mood shift along the way. In this case, the band cranks their gears to introduce a slightly faster and much heavier section where Tom Woodlock smashes the hell out of his ride cymbal. ‘Demotivator’, meanwhile, throws out a perfect sludge metal groove, making zhOra sound like an unstoppable beast of a band. The way they counter this with a cleaner and colder prog metal mood seems to give off a feeling of restlessness, but it really works. As does introducing a few death metal tropes via a relentless and complex drum part. For most listeners, though, the real appeal will come when everything subsides for a heavy section that sounds like Lamb of God tackling funeral doom grooves. With the slower, colder, backdrop, the vocal appears to shift from a hardcore growl to almost a black metal coldness, giving zhOra yet another musical angle this time out.

‘Wall of Time’ presents several minutes of hardcore grinding which, save for a vaguely prog metal time signature, is far less interesting. That said, it’s all brilliantly played: the way Tom dictates a very mechanical chug throughout is a great example of this band’s style – which at this point sounds as if it would be capable of annihilating anyone unfortunate enough to share a live bill with them – while Colin seems set on absolutely caning what’s left of his vocal chords. During another genuine highlight, ‘Spectral Embrace’, zhOra apply their kitchen sink approach to a whole manner of moods and riffs in a continuously unsettled manner. The opening quickly suggests something from the heaviest end of the groove metal spectrum, taking elements of I Am The Law into even heavier places. If you know anything about this band, you’ll also know that might well be a red herring…and sure enough, after a few bars, the riffs fall away to expose a rare, cleaner toned guitar and even cleaner vocals. Adopting something like a progressive metal stance, zhOra continue to surprise with such a dramatic shift. From here, though, the melodic edges quickly seem at odds with everything else and soon drop back into heavy pneumatics. If you’ve been a fan of the band previously, there’s a lot to enjoy regarding that heaviness, but it’s with the track’s second half that things finally fall into place. A weird, cold riff introduces an equally odd industrial interlude, before settling upon a heavy, mechanical chug. In terms of riffs, it’s fucking massive – big enough to make half of this album appear non-committal. It’s what you might call a genuine speaker buster. It’s so big, in fact, that it crushes everything else. There are odd, atonal guitar leads that are made just about audible; even the husk of a vocal sounds if it is struggling to grab a hold of a dominant role. …And then, things get heavier still, as the chugging riff takes on some extra sludge; the lead guitars scrape and howl approximating the sounds of heavily abused factory machinery. The whole effect is just devastating. It seems a little odd that zhOra would settle for fading out the music as the track reaches its end, but that still doesn’t detract from an overall powerhouse of noise. If you like sludge, prepare for your jaw to hit the floor.

‘Mortals’ is an incredibly intense album. It’s also quite draining if approached in one sitting, despite clocking in at barely half an hour. In lots of ways, though, the album presents zhOra sounding better than ever. The band seem more assured when deeply immersed within their own complex world and most of the album’s riffs absolutely slay. If you consider yourself a fan of this band, it’s an essential listen…and if, so far, zhOra haven’t been on your radar, it’s still an essential listen. Extreme metal doesn’t come a lot better than this.