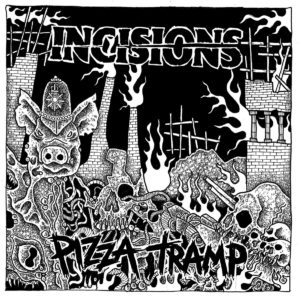 Manchester’s Incisions take a relatively traditional approach to hardcore, but it’s something that’s found them in great shape previously. Their “full length” from 2018 packs a dozen tracks into under twenty minutes, taking obvious cues from Minor Threat and other bands from the early years of the Dischord label. The pair of tracks that fill their side of this split follow a very similar path, very much working on the “don’t fix what isn’t broken” theory, but in sticking with that formula, they give fans two more absolute bangers that aren’t to be missed. ‘New Day’ kicks off with a slow, metallic riff, suggesting a fearsome attitude. Pretty quickly, that gives way to a classic hardcore punk sound that absolutely motors with the spirit of classic Black Flag and Minor Threat, but given a much fatter production sound. An especially gravelly vocal stokes up the gruff qualities of the track, but like a few of his great forefathers – Rollins, Greg Graffin circa 1981 and D.O.A’s Joe Keithley, frontman – Jordan understands the importance of an audible message. In less than ninety seconds, Incision mark their return with a very direct slab of punk, but with everything flawlessly arranged, there’s every confirmation that – along with Natterers – they’re one of the finest exponents of young, British hardcore. Keeping up the momentum, ‘Jennifer Aniston’ kicks off with a fantastic bassline, before dropping into a grinding hardcore riff that’s one of the band’s most earthy sounding to date. The chorus leans a little more towards traditional hardcore/thrash crossover sounds, but doesn’t ever lighten up. In direct comparison to the debut album, Incisions sound heavier and angrier all round – and always in a good way. Even Jordan’s lead vocals are throatier than ever before, something that shows a band willing to evolve and progress. Although the shift towards heavier sounds is slight, it shows that they’re obviously not keen to just make the same records over and over. If you liked Incisions before, these tracks are a highly recommended listen.

Few bands seem as keen to make that instant connection with listeners as Welsh band Pizzatramp, self-proclaimed makers of “horrible one minute thrash skate noise punk”. Their ‘Knighthoods Are For C*nts’ is anything but subtle. Within seconds, the track sets up the advertised crossover between thrash and skate punk. In some ways, the band’s core sound feels like an indirect throwback to crossover pioneers D.R.I. as well as channelling some of the energies of the early punk ‘n’ roll/hardcore crossover sounds of The Computers, before they made the leap to commercial mod influenced tunes. Regardless of lyrical concerns, one of the first things that’ll hit you about this particular track is how well the band can play. The drums and guitar riffs are frighteningly tight, while the naturalistic vocals really add a sense of chaotic anger. After one listen, it’s almost certain that – assuming you like Pizzatramp sledgehammer style – “What do you need to be called “Sir” for anyway? You’re a fuckin’ school teacher, mate!” could just be one of the best lyrics of their career to date. So simple, so direct, but the sneering is so undeniably British. With ‘Noise Emergency 3000’ taking their thrash base and speeding it further, injecting it with squalls of feedback and a drum part that’s so intense, you might think everything will just snap. It obviously can’t sustain more than a minute, so the band then changes tack, slowing down for a few angry riffs that show off the other extreme of their sound. It’s a lot slower, but every bit as intense: in the live scenario, this will be pure mosh-pit fuel. As for this studio recording, it’s still positively incendiary. You can actually hear the bottom end notes of the slow, grinding riff actually threatening to break speakers with intensive bass volumes. As this draws to a close, whether you’re already a fan or new to the band, these two songs will have you wanting even more from these Welsh noise-makers.

This is a fantastic split. It’s always great to have new material from Incisions, but everything on this EP is of such a high standard. In less than ten minutes, both bands make a massive impact. Fans of classic material from labels like Discord and Alternative Tentacles could easily find a couple of new favourites here – the 7” split format proving, yet again, to be the most powerful tool when it comes to highlighting punk with a brilliant and direct hit.