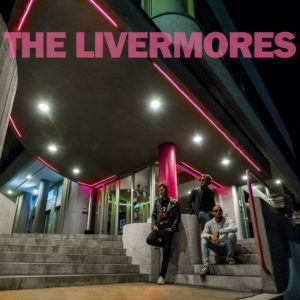 The Livermores’ 2019 self-titled disc follows a couple of EP releases (including a fun split with Proton Packs), is advertised as a full album but still only clocks in at a length that some bands would still consider an EP. In an especially lean twenty four minutes, though, this band smashes their way through a full thirteen tracks of speed-driven punk, creating a listen that’s both enjoyable and incredibly energetic.

The album’s lead track ‘Copacabana’ has been kicking around for some time, first making an appearance on an EP back in 2016. This re-recorded album version knocks its earlier counterpart into a cocked hat at every turn. With a bigger recording budget, some actual bass and a better vocal, it has an all round tighter feel, despite clinging on to a hard and fast Ramonescore arrangement. While you’ll have heard a million tracks in this style with better choruses, this manages to remain great thanks to both a taut riff and a brilliant harmonic sound from the guitar lurking beneath the more obvious elements. With barely enough time between tracks to be called a legitimate break, ‘I Love Her (But She Don’t Care)’ couples an obvious Ramones riff with something a touch poppier, occasionally reminding of fellow Italians The Apers and The Manges. The inclusion of a counter vocal on the chorus makes what would have been an ordinary but good hook great, creating an album stand out in the process. Another re-recording ‘F.P. Is A Spy’ is a fantastic punker that has verses blatantly lifted from Ben Weasel’s back-cat, but takes the familiar somewhere more interesting as a more melodic chorus is overlaid by electric drones that sound like a cross between a guitar harmonic and an old garage rock keyboard noise. In terms of pop punk, it’s all very familiar – but it’s first rate stuff.

Cranking the speed, ‘P.P. Is A Spy’ is a near perfect homage to Screeching Weasel’s high octane pop punk and really shows off the tightness in The Livermores’ playing, while ’48s’ and ‘Easter Island H.E.A.D.’ really go for broke in the punchy stakes. Although ’48s’ is a lightning bolt of a track that doesn’t even stretch as far as the advertised forty eight seconds, there’s still time enough to get knocked aside by some great playing, while ‘Easter Island’ delivers the catchiest chorus of the whole record. Atop a fantastic riff – again chiefly inspired by Ramones and Riverdales – a one line hook really aims to get under the skin. Almost as good, a re-recorded ‘C.I.A.’ – by now en route to becoming The Livermores’ signature piece – fills two minutes with a punky banger that sounds more muscular than before. Armed with an old Screeching Weasel riff and repetitious hook that have been bolstered by the bigger budget, The Livermores make another bid for the Euro pop-punk crown. In lots of ways, although on the surface it’s yet more formulaic Ramonescore, this has a bigger punch than a few other tracks. With enough space for a hefty bass rattle to cut through and a few gang vocals applied, it’s another highlight. It’s obviously taken the band a few years to cut a genuinely great version of this track, but this album version could now be seen as the definitive.

If the love for Ramones weren’t ever obvious enough, ‘G.K. Commando’ has obvious cues from their legendary ‘Commando’ from 1977 and ‘The Reunion’ has a couple of elements that are brazenly recycled from Ramones’ ‘I Love Her So’ and replayed at a much faster speed. Neither try to be especially clever and they certainly don’t bring anything new to the style, yet at the same time, they’re both a really fun listen. Above all else, that seems to be The Livermores’ chief agenda on this record – hard and fast fun. In that respect, these are still top quality pop punk, even if their inspirations are even more obvious than usual. Another highlight, ‘Summer 16’ blends a perfect Ramonescore riff with more of a bubblegum punk inflected chorus. Occasionally this hints more at ‘Don’t Back Down’ era Queers, but a real punch on the verses and a heavily accented vocal always bring everything back to its solid Italian pop punk roots. If this appeals, a listen to ‘Narcissistic Punk Rock Disorder’ by label mates Mega is also advised.

Yes, it’s all very formulaic. Yes, you own several dozen albums that sound like this one already. And yes, obviously, you’ve heard The Livermores do this kind of thing several times previously, too (not to mention the fact that at least three of these songs have circulated in earlier guises or on comps), but there’s something about the way this album hangs together that makes it seem so much better than the sum of its parts. With a love for speed, some great playing and that a disarming brevity working to its full advantage, ‘The Livermores’ (the album) can claim a place as one of the best punk discs of 2019. Over-familiarity be damned.