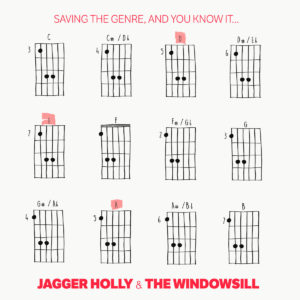 When approaching a release called ‘Saving The Genre, And You Know It…’, it’s likely you’re expecting the performers to carry a certain amount of arrogance. You’re certainly heading in with high expectations. You might even expect that a title like that would be setting itself up for a fall…

NOPE! This split release between Euro punks Jagger Holly and The Windowsill is bloody amazing.

The first two tracks by Jagger Holly, in particular, could even rank among some of the finest pop-punk you’ll hear. ‘Nobody Wants You’ kicks off the band’s four song flurry with a number that comes across like a speed driven take on the K7’s with an old Dave Parasite chorus attached. In under fifteen seconds, this has the potential to pull in a very broad demographic of pop punk and Ramonescore devotees. Lennon Lee Roth’s guitar playing is both precise and sharp; Jagger’s vocals convey an accented power pop cool – something that always boosts the band’s overall melodic stance – and the general pace itself is a full scale mood lifter. If you’re a fan of New Rochelles, The Manges et al, you’ll love this in a heartbeat. In the other half of a classic double whammy, ‘Out of Luck’ is even better, possibly even deserving of the title of “pop punk masterpiece”, drawing a huge amount of influence from Parasites in their prime. Verse wise, it’s all very much more of the same albeit a little slower, but upon reaching the pre-chorus and then into main hook, the track breaks into a truly lovable piece of Ramonescore that’s a hard act to follow. The way Roth drops in a couple of rock ‘n’ roll fills helps everything to feel a little broader than pop punk that’s been merely hacked out, too. In all, these two minutes are a career high for this European trio.

Slowing down, ‘Better Off (Without You)’ explores the potential within a slightly chuggier guitar riff and more of a power pop stance. While the slower tempo exposes a few limitations within Jagger’s slightly gravelly delivery, it’s still a solid listen overall. Jagger Holly end their run tracks with another slight variation on a classic sound as ‘All The Boys’ opts for something a little poppier all round. Roth stokes up the muted chords on the verses, pushing everything further from a Parasites influence and closer to the likes of MxPx, before blossoming into an expected bigger hook with a much stronger melody and some finely arranged gang vocals. The way guitar fills are used on the verses is simple but effective, but – as is often the case with Jagger – the chorus goes all out to entertain. The way the band have managed to fuse a couple of power pop traits with another old Parasites infected chorus delivers another winner.

On the flipside, four tunes by Rotterdam’s premier punkers The Windowsill mark a slight change in style, but manage to keep up the level of quality. Their first track, ‘Cigarettes Kill’ eschews the bigger choruses for a little more speed and an overall sound that has more in common with Screeching Weasel, or shows the band to be slicker cousins to The Radio Buzzkills. This creates a decent message-oriented number where frontman Marien Nicotine (previously of The Apers) applies a great vocal to a solid riff, coming back with something that could be an easy fit for any number of Apers or Manges discs. ‘Don’t Worry Baby’, meanwhile, is a little lighter and more harmonious while still being big on muted chords. Being The Windowsill’s own take on the element of Ramonescore that evokes teenage love and burger joints, it’s almost like one of Dan Vapid’s best tunes, but with a bigger focus on a counter harmony. Tapping into power pop, ‘Lead Back To You’ shows off the band’s appeal far more broadly, as they take a verse melody that would please Ric Ocasek (RIP) and couple that with something much closer to the pop punk tradition. The vocals are strong throughout, but it’s the simple lead guitar refrain that creeps in that reinforces any belief that The Windowsill often value a good old power pop melody.

In closing, ‘Last September’ is a brilliant and very commercial banger that presents The Windowsill in the mould of a Euro Sum 41 meeting with Dan Vapid. While some punk fans might find its sun-filled bounciness just a little too saccharine, the end results are perfect for the style. The verse has plenty of drive thanks to a set of perfectly executed muted chords, but the chorus is where everything truly wins out and The Windowsill show how they’re not just capable of going toe to toe with Jagger Holly in the catchy stakes, but actually eclipsing their best efforts. A world of group vocals results in one of the most infectious hooks; the melodies are absolutely incessant and the overall performance is…flawless. By the time you’ve heard this – and ‘Lead Back To You’ – a few times, you’ll feel as if The Windowsill are old friends even if you’ve approached them for the first time on this split.

Between the two bands, the eight songs and just twenty minutes, ‘Saving The Genre…’ presents hook after hook and a feeling of love for the genre that’s constantly uplifting. If you’ve previously followed The Windowsill or Jagger Holly, or still carry a deep love for Parasites, Dan Vapid, The Leftovers, The Apers or any number of melodic pop-punkers, you need this disc. It mightn’t be anything new, but that’s besides the point.