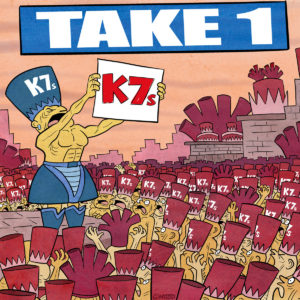 What would happen if you took a member of the Bullet Proof Lovers, a member of Spanish punkers Los Reactivos and a member of the Spanish band Airbag and set them to work in the recording studio? You’d end up with K7s, one of the finest pop punk outfits to release an album since the genre’s glory days of the 1990s. Yes, the K7s’ debut is that good…and in in almost every way. It’s hugely indebted to days gone by when pop punk meant pop punk and not whiny music with an overdriven guitar riff, but that’s every reason why it’s great.

The album’s opening number – and lead single – ‘Running Back To You’ essentially tells you everything you need to know about K7s’ musical stance (and essentially whether you’ll like them or not) in approximately two minutes. This track is a bona fide pop punk belter, combining the drive of Bullet Proof Lovers with an old Screeching Weasel riff, before unfolding to reveal a very catchy chorus. It’s pop punk 101: twenty years prior, this would have been on a best selling Lookout! Records release. When the style is tackled this well, it’s lack of originality does not matter one bit. ‘Listen To My Heart’ brings more of almost exactly the same, except it takes time to break up the main riff with brief stops and downstrokes. In terms of a chorus, too, it’s terrific, capturing Luis ‘Reactivo’ Sanchez’s Euro curl against Kurt Baker’s classic power pop belt in a perfect punk harmony. Showing no signs of slowing down, although injecting a more obvious commercial streak, ‘Every Night’, thrills with a dual guitar attack in pop punk style and speed, but gives fans of power pop melodies far more to love on a superb chorus that’s just a bit closer to KB’s solo material. Again, it comes with a tried and tested familiarity, but if you’ve heard – and, more importantly – liked Bullet Proof Lovers, this’ll very much hit the spot.

Trashy fun, ‘It’s The CIA’ utilises a chorus loaded with backing vocals and a pacing that could easily be Riverdales, but like the previous tracks, certainly presents top tier punk fun, while one of the album’s real stand outs, ‘All About Me’, offers a selection of speed driven muted chords, very much as if K7s have tapped into the musical glories of early Face To Face or Hateful Monday, which results in melodic punk gold. More so than the music, though, it’s the vocal that really lifts this number to classic status: upon hitting a catchy chorus, the band really makes an impact with a counter vocal melody and their fine balance between speed, power and melody suggests there’s nothing tossed off or trashy about this homage to a pop-punk past. An instant classic, ‘Neverending Love’ starts with a shameless lift from Ramones, before shifting into a high-gear pop punk frenzy that takes the guts of Kurt Baker’s old band The Leftovers, but also boosts the punky sound with a killer production and the kind of uptempo style that drove Bullet Proof Lovers’ second record. With his accented voice, Luis gives things a certain kind of edge you wouldn’t necessarily find in US punk, making this the missing link between one of the greatest Fat Wreck signings of 1996 and the Manges.

Slowing down a few notches, ‘Go Away’ allows more of a melodic stance all round and really shows off Baker’s rhythmic guitar chops. As before, the best moments come when K7s allow a dual vocal to step to the fore. Overall, a great arrangement outweighs a much weaker chorus, before ‘She’s Leaving Tonight’ explores those melodic backing vocals once again, teasing with a brilliant call and response vocal, some cheeky heys and – eventually – a killer chorus. It would already be great, but a thunderous drum sound throughout really gives it an edge. It’s definitely one for the Manges and Apers fans out there! Almost the odd man out on this long player, ‘Your Lips Met Mine’ steers the band firmly into power pop territory, not far from a Baker solo number in places, but also harks back to the more radio friendly style of Shades Apart. K7s have not got a wall of speed to hide behind here, but in terms of arrangement – a world of jaunty, muted chords and slight Cars-isms coupled with a harmonious and catchy as hell chorus – the talent within the band is more obvious than ever, as are the reasons why these already established musicians were so right to form a new union.

As if acutely aware that ‘Lips’ and ‘Go Away’ veered a little too far towards the commercial, K7s go all out on ‘Get Out of My House’, a short and aggressive punker that’s never a million miles away from Green Day’s ‘Platypus’. It mightn’t be the best K7s number – in terms of chorus writing and musical showcases, you could pick most of the other numbers over this – but it’s great, straight up punk and it certainly clears the cobwebs… Finishing off a mostly superb record, ‘I’ve Been So Blind’ seems completely out of step at first, offering choppy acoustic strums on the opening verse, but soon enough the band plugs in, amp up and bows out with a punchy but melodic punker that revisits their best traits. The drums are great, yet again, providing a solid backbone so nothing ekse feels out of place, while the multi-layered harmonies make sure this track – as a final impression – brings just the right balance between power pop melody and punky power.

Okay, sure, you can pin point K7s six or seven key influences throughout this album should you be so inclined, but there’s no escaping that ‘Take 1’ is an album made with a pure love for the style. Don’t expect any kind of originality – that’s really not what the K7s are about. Do expect the best tribute to the melodic punk and pop punk bands of yesteryear: in terms of total homage, you’ll be hard pressed to find anything finer. With great choruses, breakneck riffs and an amazing production job, this record will be a sure fire favourite among the pop punk obsessed.