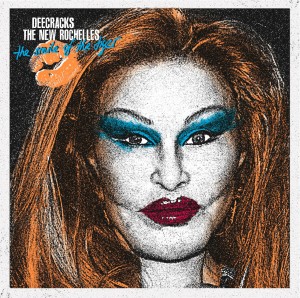 Second only to a great punk compilation, split releases are a great way to discover work by new bands, or else bands that might have slipped under your radar.  This particular split release is a great primer for two acts who fit firmly under the Ramones-core banner, both geographically opposed but united in their love of simple and direct punk-pop.  Issued via Swamp Cabbage Records (home to Caffiends, Up For Nothing and Gnarly Whales), the ‘Smile of the Tiger’ EP brings four fantastic previously unreleased tracks from Austria’s DeeCracks and Eastcoast US punks The New Rochelles.

First up, DeeCracks bring plenty of edge to their two performances.  Long standing fans will know what to expect from the European trio from the outset, but their particular brand of Ramones influenced punk isn’t always quite as friendly as some practitioners. Their grittiness is largely down to vocalist Matt C, a man whose vocal chords sound a little ravaged by time…and hard liquor.  Behind the killer rasp, though, ‘Let’s Get Outta Here’ is straight up punk-pop 101: drummer Mike C counts to four, three chords power their way through the kind of riff that would make Johnny Ramone raise an eyebrow, and it’s all over bar the shouting within a couple of minutes.  There are a couple of great flourishes for those paying closer attention, of course, and in the case of this track, the inclusion of handclaps is inspired.  They bring an extra feeling of lightness and all-round jollity while increasing the feelgood factor immensely.  The slower, more methodical ‘She Belongs To Me’ allows space for a chunky riff to back up a tough vocal.  Sounding like an old Ramones tribute to Phil Spector voiced by a street brawler, the voice and music occasionally feel a little mismatched, but that only serves to give the performance a real sense of grit.  While not as polished as some, there’s a love in this homage to a homage – enough to ensure Joey and Johnny would be very proud if they were still here.

Less prolific in their output than DeeCracks, New York trio The New Rochelles are the very embodiment of “you can’t fix what ain’t broke”. Taking four chords and a bunch of short songs, their 2011 LP – the ironically titled ‘It’s New’ – delivered twelve mini statements worthy of Screeching Weasel/The Queers back in their prime.   The two previously tracks included on this split are absolutely fantastic, better than those from the LP – in fact, just about as perfect as punk-pop gets.   ‘Cuadido’ outshines any of the band’s previous recordings and in just over a minute they’ve effectly floored any punk-pop fan who’ll care to listen.  The energy in this performance is immense…and frankly vocalist Ronnie Rochelle is such a dead ringer for Ben “Weasel” Foster in the way that his delivery rises, you’d be forgiven for thinking you’d stumbled upon an unreleased Screeching Weasel track from the ‘Anthem for a New Tomorrow’ sessions.   ‘Nightcrawler’ follows the same blueprint, but increases the bubblegum punk elements, leaning more towards The Queers than the Weasel.  The differences may be slight, but for longstanding fans of either band, they’ll be evident.  Again, the riffs come fast – this trio are superbly tight all round, there are no slouches here – drummer Ricky Rochelle sounds primed to take on Marky Ramone, while bassist Rookie pummels his four string with a certain degree of robustness throughout.  It may be dumb, but the chosen chorus line “I am a nightcrawler, creepy crawly!” is a massive earworm almost instantly.   Both tracks are fantastic additions to the band’s existing catalogue.

The contents may be highly predicatable, but the tunes that make up this split release are of the highest quality.  Fans of either band should download these four tracks immediately.  For lovers of The New Rochelles, especially, ‘The Smile of the Tiger’ is essential.