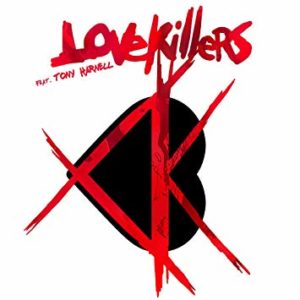 TNT always sounded best when listened to in short bursts and much the same can be said for Lovekillers, a European melodic metal band who love all things huge and bombastic. Seemingly the 702nd band on the Frontiers label to feature producer and multi-instrumentalist Alessandro Del Vecchio, Lovekillers also features Harnell on vocals. This, of course, means that any comparisons with TNT are inevitable, despite nobody in the band having the same levels of talent as Le Tekro and company, or songs that are anywhere near as sharp. It’s worth noting that Harnell has simply been drafted in to give life to songs written by Del Vecchio and his friends (including Three Lions man Nigel Bailey) and this often makes Lovekillers sound more like a studio project as opposed to a genuinely organic band. However, bits of this 2019 album are more than fine for the style, especially if you’re a less demanding rock fan looking for something that sounds best with the volume cranked for maximum effect.

The opening number, ‘Alive Again’ tells you all you need to know about Lovekillers and the general mood Del Vecchio is keen to put across. After a few piano notes, massive riff crashes in and while that ensuing riff is decent enough, it sounds a little muddy due to the chosen production style. A slightly quieter verse ushers in some fine Euro rock before a massive chorus injects a little more excitement. While it seems a little lacking in the melodic harmony stakes, from a full scale old style hard rock perspective, it’s charming enough and Tony is in good vocal form. In a far more palatable AOR style, ‘Hurricane’ offers the album a genuine highlight. Opening with a choppy riff overlaid with a great soaring guitar line, it gets off to a terrific start, before dropping into a poppier verse where Harnell sounds a little out of place, but the vaguely Euro and very 80s melodies are very strong. Hearing Harnell singing about “being caught in a hurricane” and drowning in someone’s eyes possibly gives out a mixed metaphor – most certainly some weather-based confusion – but it’s one of those cheesy choruses that works despite itself, so best not to over think it. The tried and tested AOR style brings a fine melody that Harnell totally runs with, and by the end of the second verse, Lovekillers sound not only like a band who’ve found their true calling, but also a band you’ve known for decades. Factor in a terrific but short solo and classic sounding 80s AOR bridge, this has a little of everything lovers of the style could hope for.

The solid mid-paced AOR continues through ‘Ball & Chain’, a cliché heavy number that recalls the punchy style of early Harem Scarem, but adds a slight Euro twang. Harnell is in great shape once again, and while the rest of the band could be accused of phoning in a predictable melodic rock arrangement, a great guitar solo and a few well placed harmonies actually makes the predictable feel like a visit from an old friend. ‘Higher Again’, a punchy pop-rocker in the mould of early Danger Danger and Hungryheart, presents itself with a great spirit. Against a solid rhythm section, guitarist Gianluca Ferro offers a brilliant uplifting riff – and an even better solo – while Harnell takes every opportunity to draw a great melody from a very confident vocal. While he no longer possesses quite the siren’s wail that could once shatter glass, his abilities to hit a few higher registers on a cracking chorus are still without question. Predictable and generic as it may be, this is still a great track and joins ‘Hurricane’ as reason enough to own this album.

A little softer, ‘Across The Ocean’ starts off a little like something Desmond Child might’ve written for Alice Cooper circa ‘Hey Stoopid’, but quickly shifts into a brilliant AOR track with traces of Hardline and Johnny Gioeli throughout. With a slightly more sedate arrangement, Harnell’s voice gets even more of an opportunity to shine and despite even more lyrical clichés, everything works out for the best. Well, almost everything: this is a rare example of the band choosing the wrong approach for the instrumental break. At first Ferro opts for something dirtier than expected, guitar wise, before launching into a flurry of notes that seems far to busy for the job in hand, while Del Vecchio drops in with a synth patch that sounds as if its been sampled from Gregorian chanting. He’s very obviously decided he doesn’t have quite enough of a presence during this number… However, halfway through the returning chorus, any bad choices are forgiven, since the bulk of ‘Across The Ocean’ carries such a timeless melody.

Elsewhere, you’ll find Harnell belting his lungs throughout ‘Bring Me Back’, a semi-bombastic piece of Euro rock that veers a little too close to a sea shanty melody and ‘No More Love’ a vaguely overplayed, vaguely pompy number that values a vocal over everything else. If it wasn’t obvious previously, every effort has been made here to place Harnell really high in the mix, as he wails – brilliantly, it should be said – over an indistinct and slightly muddy rock arrangement that absolutely screams of Del Vecchio’s creative hand. Musically, this could be interchangeable with any of the dozens of bands he’s worked with over the past decade. That doesn’t make it bad – just a bit more workmanlike. If there’s any culprit in this track’s bigger shortcomings, it’s the fudgy end mix. So many Frontiers releases are hampered by a lack of separation between the instruments, but this track is worse than most, unfortunately. Returning to something of quality, ‘Now or Never’ offers some brilliant, semi-punchy AOR where Ferro is clearly having fun with a wah-ed guitar sound and Del Vecchio’s blankets of keys are a good fit with a very clean late 80s sound. Chorus wise, it’s even better, loading a great tune with big harmonies and a sense of hope. Whilst the soaring keys and harmonic guitar parts retain the European feel that pumps the heart of most of Lovekillers’ finest material, the vague traces of Harem Scarem’s sound and a chorus that has Tyketto‘s optimism certainly help to give it a bit more all-round appeal.

This isn’t a perfect release by any means, but you could certainly call it a record made with love. There’s little doubt that Lovekillers are a solid band but, the real star isn’t the band member with the biggest discography (the omnipresent Alessandro “I’ll play on anything, me” Del Vecchio), but obviously, the one and only Tony Harnell. Decades on from his TNT heyday, he still has a strong presence and given the more AOR slant to this record’s better material, it’s a pleasure to experience him putting in a performance that’s fairly sympathetic to the job in hand. There’s nothing here that’ll set the world on fire, or anything that’ll surprise you. However, since the five or six best tracks have some very strong hooks and various melodies borrowed from the genre’s heyday, it still results in a listen that’ll have plenty of appeal for genre fans.