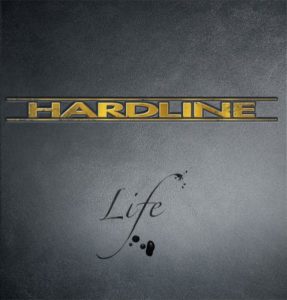 On the basis of ‘Life’ – Hardline’s sixth studio album and their third since 2012 – the answer would have to be…no. Although far more geared towards melodic hard rock than AOR, ‘Life’ is brimming with energetic songs that, in the main, showcase a man in fine form even if most of the songs don’t always sound like Hardline during their earlier years.

An instant highlight, ‘Helio’s Sun’ is a full-pelt, shamelessly old fashioned rocker that borrows the pace of Rated X and twenty first century King Kobra and applies that to a few old musical tropes that set it off excellently. Alessandro Del Vecchio is on hand with various Rainbow inflected organ sounds, while guitarist Mario Percudani absolutely hammers at his six strings throughout, peaking with an impeccably played melodic metal solo that really encapsulates the sheer energy of this line up of a much-loved band. Also a great example of Hardline’s rockier side, ‘Out of Time’ launches itself head-first with a huge melodic metal riff that doesn’t even subside once Gioeli starts to sing. It doesn’t always have the feel of classic Hardline at first but, thankfully, a concession to something with more of an AOR influence fleshes out the chorus. With a more accessible melody and a few backing vocals there are glimmers of the band’s glory years, before Percodani steps up and plays a full bodied solo that’s more Pete Lesperance than Neal Schon. In terms of hard rock bangers, it’s another winner.

With a meaty riff that’s got more in common with the hard rock of Revolution Saints, Dokken et al than Hardline of old, ‘Hold On To Right’ demonstrates a fantastic guitar tone from Percodani on a very late 80s sounding riff that encourages Johnny to reach within himself for a slightly bombastic performance. As with most of the other tracks, the lead guitar work is stellar, but the weight new drummer Marco DiSalvia lends the number is also more than commendable. Taken on it’s own merits as a slab of beefy hard rock, its great providing you don’t pay too much attention to the various nonsense lyrics (“Help me one more time / To one more crime”, sings Gioeli on the chorus, as if English were his second language), or expect Hardline to be in any way concerned with a shinier AOR sound. ‘Handful of Sand’ has the kind of hard rock flair you’d expect to hear from label-mates Snakes In Paradise and sounds like classic Euro fodder with a certain appeal from the very first listen. Throughout the track, Gioeli sounds supremely at ease with the band’s hard rock direction and the music showcases some of the album’s finest riffery. Percodani has a lovely feel to his playing throughout and he maintains a real sense of presence even though he’s working with a fairly standard 4/4 groove. A detour into something far more confident for the instrumental break gives him a few moments to up his game, before another flawless solo tops another enjoyable track.

Those hoping for something a bit softer should make a beeline for ‘Page of Your Life’, a big ballad with a very Scandinavian bent. While Gioeli has a tendency to over-sing in a few places, this won’t upset his more loyal fans and never damages a great track. The piano work is stately and the melodies are incredibly strong. It’s very much constructed from tried and tested elements that melodic rock fans have loved forever, but the presence of more fantastic – and very emotive – guitar work gives it a definite lift, even if it doesn’t quite reach unmissable status. ‘This Love’, meanwhile, goes deeper into piano balladry and it’s very much a number that would’ve seemed classic in 1989. Gioeli settles upon a fairly grandiose vocal delivery, but never overshadows either Del Vecchio’s timeless sounding piano work or a world of soaring guitars. Working well within the genre’s predictable confines, the chorus is huge; a harmony driven, melodic charmer that would have suited the departed Jim Jamison back in the day. Overall, there are no surprises to be found here, but it should please most fans. With a clean guitar tone and old-fashioned stereo split, ‘Chameleon’ provides immediate interest during its intro and it’s a pleasure to hear the band branching out – but soon enough they retreat to a hard rock comfort zone. The song that quickly takes shape from then on is very much of the XYZ mould with a groove-based riff that brings out more of the best in Percudani, before a chorus reveals a semi-macho mood that seems to be a battle of wills between a very 80s vocal and 70s organ. Choosing to end the track very abruptly with the effect of a record being scratched is definitely a mistake, but up until then, it’s got all the makings of a hard rock belter. Like the bulk of this record, though, whie it’s hugely enjoyable on its own terms, but doesn’t come across particularly like Hardline…

The wholly acoustic ‘My Friend’ features some nice playing, but definitely feels like an afterthought to counterbalance an album that’s so reliant on rockers. That doesn’t make it bad, but it’s very much the kind of thing you’ve heard a thousand times before and, stuck on the end of the album as it is, there might be too much temptation to skip it every time beyond the second listen. The only time this album really falls flat is during an ill-judged cover tune. Covering Queen songs is a thankless task at the best of times, so in some ways Gioeli should be commended on his bravery for even attempting to tackle something as grand as ‘Who Wants To Live Forever’, but the results are fairly horrible. During the track’s first half, he cries and croons against a piano in a manner that’s of the purest musical theatre, before a fairly generic melodic rock guitar solo takes centre stage with something that carries none of Brian May’s distinctive style. It’s only with the full band joining during the climax that this even feels close to being rescued, but in all honesty, it never rises beyond sounding like generic melodic rock filler…and a great song deserved so much better than that. In fact, what it really deserved was to be left alone…

At this point, Hardline might only be Hardline in name only due to this album featuring almost none of the classic line up and the songs veering much closer to melodic metal, but ‘Life’ features more than enough strong material to keep fans of Gioeli’s voice entertained. …And it’s those fans who’ll come away the most happy, as Johnny boy is in great form pretty much throughout. The best advice here is to try and enjoy this for what it is rather than what it could – and perhaps should – have been. Just skip that Queen travesty and it’ll sound even better.