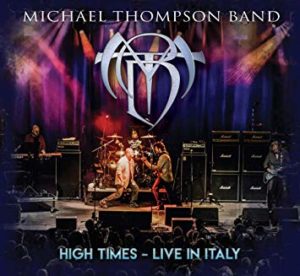 This live document from 2018 showcases a few tracks from ‘Love & Beyond’ album over a year before its eventual release and more than proves the then brand new material a lot of had merit. On the featured performance of ‘Save Yourself’, the music comes across with a genuine 80s sheen. Clean toned guitar work reflects the pop/rock edges of the MTB’s sound; the bass drives the track with a real punch and Soliel Moon vocalist Larry King – although a little quiet – carries a strong melody throughout. What this live recording does is present MTB in the mould of a slightly punchier Mr. Mister, much to their strengths. By the time the band encourages a little (inaudible) crowd singing and Thompson steps from the shadows for a cracking lead guitar break, it shows how this had all the makings of being as good as anything from ‘How Long’. It’s still the only genuinely great track from ‘Love & Beyond’, but since this live recording surrounds it with better material, it could actually become the definitive version.

The title cut from ‘Love & Beyond’ has a really old fashioned crunch during the intro. With a swirling organ sound augmenting a 70s riff, it’s possible to hear a band of crack musicians locked into their groove and even once the verse drops into something very 80s, the overall sound is confident. It’s a tragedy that it was taken from this – clearly a solid tune – to sounding like an indifferent, generic, almost fudgy mess on the corresponding studio album. At least now fans can hear something resembling a great song. The last of the newest numbers, ‘Starting Over’ is very much stronger in its live incarnation as it has far more punch. What eventually sounded like an old Magnum cast-off by the time it reached the studio was once a track with some actual fire. Yes, it has the heart of something Magnum might have turned out around the time of their ‘Princess Alice & The Broken Arrow’ album, but given room to stretch out during this live set, it’s more of a tour de force. The lead vocal is less impressive, perhaps, but the rest of the band take the opportunity to give their all. Thompson adds various fiery lead guitar breaks, which played in a call and response style with Guy Allison’s keys, really suggests a band having fun on stage.

Exploring some of the cuts from the legendary ‘How Long’ within the set, it’s amazing how good they all sound considering none of this version of MTB – bar Thompson, of course – actually played on the studio record back in ’89. The big ballad, ‘Give Love A Chance’ gives the show an obvious highlight. Larry Antonino’s bass comes through with warmth at every turn; King holds the vocal performance with confidence and Michael’s lead guitar work is stunning. He always had a fantastic tone and during this particular performance that’s clearer than ever as he embarks on various lead runs that add bluesy tones to the otherwise pure AOR backdrop. Taking every opportunity to use this as a showcase, the band stretches the number to almost ten minutes, but there isn’t any feeling of them ever playing for time or attempting to pad out their set. If there’s any reason to pick up this release, it’s right here.

‘High Times’ and ‘Can’t Miss’ (both from 2012’s overlooked ‘Future Past’) offer some perfectly serviceable AOR tunes with huge choruses. Much like ‘Save Yourself’, the band’s melodic rock credentials are there for all to hear and the more natural sound of this recording means that both tracks run rings around their fudgy sounding studio counterparts, even with King really struggling to rein in his volume on the latter. Another old classic, ‘Secret Information’ is one of the only times the intimate crowd are hugely audible and this gives a welcome boost in atmosphere, but it won’t be long before your attention is drawn back to the band, since Antonino’s hard struck bass sounds especially good as he leads the band through a brilliant Toto inspired workout. For those still missing a CD copy of ‘How Long’ from their collections, this terrific performance should at least provide some consolation.

Joining ‘Give Love A Chance’ in the epic stakes, ‘Wasteland’ becomes a ten minute jam – doubling the length of the studio cut – and again, there’s more than enough evidence that the band are going all out to entertain the crowd. Of particular note here is the slick approach taken by the band. Allison’s keys occasionally punch through the rockier sound with a bell-like clarity and – as you would expect – Thompson’s lead work has a near flawless confidence. After such a fine gig, it actually comes as a disappointment that a decision was made to close an already too short set with a one song encore featuring a nine minute rendition of Boston’s ‘More Than A Feeling’. Reducing the MTB to the status of bar band, the classic twin leads a bog standard musical performance and King takes every opportunity to over-sing everything. This is so clearly designed to play into the hands of the AOR die hards in the audience who just want a good time, no matter what’s played. Maybe if you were there and this was cranked out after two or three beers, it’d be far more fun…but listening back on CD, it’s not quite the same.

Given how ‘Future Past’ was little more than a workmanlike AOR album, ‘Love & Beyond’ didn’t live up to expectations and almost none of this band had any previous connections with the original ‘How Long’ back in the 80s, this is a far better live album than it had any right to be. If you’re a fan of Thompson’s guitar playing, you could do far worse than add this to your collection and if you were lucky enough to be there on the night, it’ll become an invaluable memento for sure.

[The physical release also includes a full length DVD of the show.]