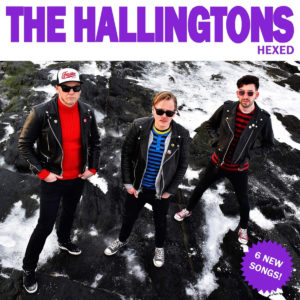 Its six tracks mine the 90s influences rather heavily, but the end results are all the better for that. An instant stand out, ‘Pretty Neat’ is a speed driven banger that could have been lifted straight off of The Queers ‘Leave Home’ (the influence is particularly obvious on the bubblegum pop inflected and slightly nasal vocal). Armed with a repetitious hook carved from gold standard punk pop, that would be enough to ensure listening enjoyment, but the general tightness within the band suggests The Hallingtons are in better shape than ever. More love for Joe Queer comes through on the defiantly childish ‘Doo Doo Brain’ and although such jibing isn’t new to the genre – the activity stretches right back to the Ramones’ own ‘Cretin Hop’ – these Norwegians have a genuine gift for making such things feel fresh. In terms of sneering humour, the targets get inverted during ‘The Witch’ – a tale of being hexed and the effect making the band so stupid, they can’t even recite the alphabet! With another fun lyric glued to a tune that is every bit as good as The Manges, Apers, Riverdales and The Hangups (another great Scandinavian pop-punk band), you can’t afford to miss this.

‘Not My Deal’ applies a few harmony vocals to a superb, no nonsense Ramones homage, but The Hallingtons have the edge on a few of their peers by being unafraid of a slightly tougher guitar sound. As if this weren’t catchy enough, the track elevates to “definite classic” status during the coda where a brilliant call and response vocal accentuates the band’s melodic edge, while the even rougher sounding ‘Jesus Freak’ leans especially heavily on Joey and Johnny for chief inspiration. More so than before, this track actually shows how The Hallingtons are all vocalists in their own right, with two distinctictly different leads, a Tommy Ramone-esque shout from behind the drums and everything culminating in a fine power pop harmony. With a superb tune driving a small town lyric concerning a young girl’s Sunday routines, it’s a great piece of pop-punk. In closing, ‘On Repeat’ re-introduces the tougher stance of ‘Not My Deal’ and takes the idea of a punk no-brainer to a whole new level. Atop an old Screeching Weasel influenced riff, a dual vocal just repeats the title over and over as if the song itself is on repeat. Obviously, this has the effect of creating the biggest earworm…and then, at the point where you suspect The Hallington’s just couldn’t offer anything more brilliantly annoying, the middle eight drops a gang vocal indulging in a genuinely ridiculous “blahblahblahblahblahblahblah”– something that should raise a chuckle from anyone who’s enjoyed this EP so far.

The Hallingtons gave the scene an absolute classic with their second release 2016’s ‘Running From The USSR’, but ‘Hexed’ beats it at pretty much every turn. If you’re familiar with the band, you know exactly what you’re in for here…and unless you’re an idiot who somehow expects pop-punk to break new ground, you’ll love this. An essential disc!