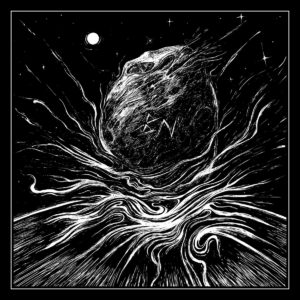 Wavering between the left and right speaker channels, a fuzzy riff opens ‘Coffin Bomb’ with a sense of unease before a fantastic bass rattle and clattering drums signify a tune – and a band – with a fearsome presence. Eventually latching on to a hybrid of sludge and groove metal sounds, the number explodes into a world of heaviness with a riff great enough to impress all but the most staunch critics. Eventually bringing in a deep growl that borrows influence from hardcore, Byzanthian Neckbeard ensure so many metal basis are covered. The track starts strongly but actually improves as it goes; a section where the extreme doom gives way for something pacier, abetted by heavy use of drum pedals, could be the best thing on a Neckbeard disc to date. Comprising seven minutes of heavy sludge intercut by a great groove, this number is recommended listening for anyone that enjoys the more extreme end of metal…or at least the slower, riffier end of that scale. Keeping up the heavy momentum, ‘Dunes’ opts for more of a traditional doom oriented sound, coming across like an even heavier Electric Wizard adorned by a man growling. Although its three minute duration might make it seem a bit lightweight compared to the usual style of Neckbeard commitment, in terms of riffs it’s utterly fantastic, with a heavy and overdriven sound used flawlessly throughout. Those who love riffs loaded with an older analogue type sound will find something timeless here.

Finally, the title track opens with a devastatingly heavy bass, signifying the beginnings of some prime doom metal, before a sludgy guitar takes a slow melody and rings every last note from it. With this heavy, plodding riff set in place, the vocal pushes for further extremes by adding a demonic growl at a jagged pace. While none of this breaks any new ground for the doom and sludge subgenres, these hirsuite riff-monsters consistently show how they’re among the best at what they do…and by the time an instrumental break rolls around, their choice of buzzing sludge-riff comes with such a head-nodding appeal, it’s easy to imagine genre fans being in their element. That’s not all, either: A busier interlude ushers in a slightly more off-kilter drum part and a bit more complexity. Although unexpected, Neckbeard’s desire to take something Tool-ish and make it as heavy as, say, Neurosis or Tuskar results in something brilliant.

‘Extinction’ may be short, but it really delivers on the promise of sludgy riffs throughout. In comparison to ‘Oblivion’ it has much better production values too, often making the band sound bigger than ever. It doesn’t really break new ground for doom or sludge metal, but when played this well (and loudly) it really doesn’t need to. For lovers of the style, this EP is a must-have.