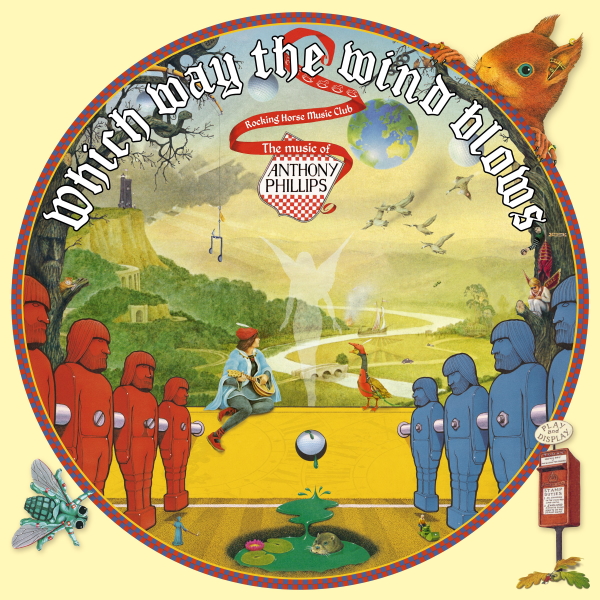 There have been various Genesis related tributes and revisitation recordings over the years – not least of all from former guitarist Steve Hackett – but the solo works of the band’s first guitarist Anthony Phillips have all too often gone unheralded by comparison.

This October, musicians associated with the Rocking Horse Recording Studio are set to put that right.  Along with the help of their more famous guests – including the legendary Steve Hackett and Supertramp man John Helliwell – ‘Which Way The Wind Blows’ takes a new look at some of Anthony’s great solo works.

Further details of this release and the accompanying tour can be found in the lengthy press release below.

In February 2019, Rocking Horse Music Club began rehearsing and recording material for a tribute album to original Genesis guitarist Anthony Phillips. The album is scheduled for release on October 11, 2019, with live dates in England scheduled for November 2019.

John Hackett (flute) – in addition to playing flute on the Anthony Phillips album “The Geese & the Ghost,” John has performed on numerous Steve Hackett records and live shows.

Kate St. John (oboe) – Kate was a founding member of Dream Academy and contributed to a Nick Drake tribute album and live show.

John Helliwell (clarinet/saxophone) – John was a primary member of Supertramp.

Evelyn Cormier (vocals) – Evelyn was an American Idol Finalist on ABC television in 2019. She is currently recording her new album at Rocking Horse Studio.

Caroline Carter (vocals) – Caroline is a former Miss New Hampshire. As a vocalist, she won the talent competition at the Miss America pageant in 2017. She is currently recording her debut album at Rocking Horse Studio.

The group’s debut single, “Everywhere is Home,” a gospel-inspired song that features London’s Sing Gospel Choir, was released to critical acclaim in April 2018. The track was featured on radio in New England and received prime time airplay on BBC Radio and London Live in England. In June 2019, almost exactly a year after its release, Everywhere is Home received the award for Best Song – Gospel at the Independent Music Awards in New York City.

The band’s debut album, “Every Change of Seasons,” was released in September 2018, shortly before the band departed for a tour of the UK that saw them perform throughout the country, including numerous appearances at the BBC and a special engagement for the British Prime Minister.

Here is a track-by-track summary of the album with comments from producer Brian Coombes:

“Um & Aargh” (originally from “Sides”): Our take on Ant’s new wave/prog pop song from 1979… reminds me of Squeeze meets the Cars, with a touch of Genesis thrown in. Features Patrik Gochez on lead vocals.

“Paperchase” (originally from “Wise After the Event”): Dreamy 12 string guitars and mellotron feature heavily on this one, along with a wonderful vocal from Justin Cohn. It sounds like something Genesis would have done circa 1976.

“Which Way the Wind Blows” (originally from “The Geese & the Ghost”): We took Ant’s beautiful acoustic song, gave it a slight R&B feel, and then added an epic prog rock climax. This one features Noel McCalla (the lead singer on Mike Rutherford’s “Smallcreep’s Day”) on lead vocals and legendary Genesis guitarist Steve Hackett on the ending guitar solo. Where else can you hear Messrs. McCalla and Hackett performing together on an Anthony Phillips song?

“Silver Song” (originally from “Sides” remaster): ‘Silver Song’ was originally intended as a single from 1973, featuring Mike Rutherford and Phil Collins. Our version features the incomparable Nick Magnus on the ending keyboard solo.

“Something Blue” (originally from “Invisible Men” remaster): We were looking for a song for Evelyn Cormier to sing on the project. Ant and I looked through his catalog of unfinished and/or unreleased songs and presented a few to Evelyn. She loved ‘Something Blue.’ Her sultry vocal delivery led us down a smooth-jazz path with the arrangement that also features the amazing talents of Wesley Thurber on trumpet and Jeremy Harman on cello.

“Pulling Faces” (originally from “Wise After the Event”): This is one of my favorite productions on the record. The rhythm section performed brilliantly, Mike McAdam and Myron Kibbee played some great stuff, and Justin delivered a killer vocal. The song also features Steve Anderson from the Room on lead guitar. Mike and I toured with Steve back in the 1990s when he was with Grey Lady Down and we were in Tristan Park, so this collaboration was a cool virtual reunion.

“Collections” (originally from “The Geese & the Ghost”): Just like ‘Which Way the Wind Blows,’ we simply couldn’t leave Ant’s beautiful song alone. The chord progression led us into Beatles territory, so we embraced that vibe. This one is really singer/pianist Pat Gochez’s arrangement and features members of his band on drums and bass. Also worthy of note is Myron Kibbee’s slide guitar and the choral background vocals.

“Sleepfall: The Geese Fly West” (originally from “The Geese & the Ghost”): One of Ant’s prettiest melodies. We developed the piece into something bigger, adding and changing instrumentation each sequence through the progression until it ends with a dramatic flourish. Features John Hackett (who performed on the original version back in the day) on flute and Kate St John from Dream Academy on oboe.

“Nightmare” (originally from “Sides”): Ant’s prog rock classic instrumental in really a showcase for drummer Eric Wagley and bassist Brenden Harisaides. We added a lo-fi optigan/toy piano groove in the middle, and with Caroline Carter’s wailing vocal and John Helliwell’s melodic saxophone in the end section, I guess I’m displaying my Pink Floyd influences vividly on my sleeve.

Working directly with Anthony Phillips, Rocking Horse Music Club has lovingly curated a selection of songs primarily from Ant’s first three solo albums, “The Geese & the Ghost”, “Wise After the Event”, and “Sides”. The band will be flying from the USA to perform these shows exclusively for us here at Trading Boundaries. These performances are once-in-a-lifetime events… the shows with us at Trading Boundaries will be the only UK appearances.

As an added bonus, the show will also include a performance of material from Mike Rutherford’s beautiful debut album, “Smallcreep’s Day”. Joining the band on stage will be the album’s original vocalist, Noel McCalla!

Trading Boundaries is proud to present this unique showcase of the early work of two Genesis legends.

About Producer Brian Coombes
Brian Coombes is an award-winning producer, songwriter, and musician. With influences ranging from progressive rock to melodic pop, Brian combines his love of interesting instrumentation, quirky keyboards, melodic hooks, and lush vocal harmonies with an extensive technical knowledge of the recording process to create releases that are both artistically and sonically rewarding. He is the owner of Rocking Horse Studio; he has also produced projects at the legendary Sun Studio in Memphis, Tennessee and Genesis’ Fisher Lane Farm in Chiddingfold, England.

Prior to Rocking Horse, Brian was a founding member of Tristan Park, a progressive rock band that was signed to the British record label, GFT. The band recorded four albums and toured extensively in Europe and North America before going into hiatus in 1998. After Tristan Park, Brian recorded a record with his wife, using the name Waking in the Blue.

Brian has received various honors for his production work. In 2014, he received two Emmy award nominations from the National Academy of Television Arts & Sciences. In 2015, he received a “Producer of the Year” award from the New England Music Awards. And in 2019, “Everywhere is Home,” a song that he co-wrote with Patrik Gochez, received the Best Song – Gospel award at the Independent Music Awards.