Following last year’s multi-disc box set of ‘Brave’, Marillion are now gearing up to release the follow up (and fan favourite) ‘Afraid of Sunlight’ in a similar configuration.

While the band are playing their cards very close to their collective chests in terms of actual details, they have revealed that the blu ray will include various mixes of the album along with all of the bonus materials from the previous 2CD set…and  SEVENTEEN unreleased tracks.

A few more details along with the all-important pre-order links can be found below.

(All subsequent info taken from the current Marillion newsletter via email) 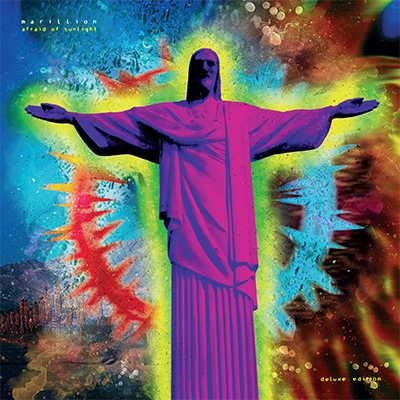 As you may know, Warner Music are in the process of releasing the 8 studio albums from our EMI days in Deluxe Editions.

They have already released Misplaced Childhood, Brave and Clutching at Straws and now we’re very pleased to announce Afraid of Sunlight has been given the same treatment.

The Afraid of Sunlight Deluxe Editions are a 4CD/Blu-ray set and a five-LP box.

Both collections open with a new version of Afraid of Sunlight that was remixed earlier this year by the wonderful Michael Hunter. The CD/Blu-ray set also includes the original mix by the album’s original producer Dave Meegan.

Both sets also have a live recording of Marillion performing at the Rotterdam Ahoy Arena on September 29, 1995 during the tour supporting Afraid of Sunlight. Six of the songs were originally released in 1996 on the double live album Made Again.

Video content includes a new documentary about Afraid of Sunlight featuring interviews with the whole band and the promo film for “Beautiful”.

The Blu-ray disc also collects the nine bonus recordings from the remastered edition of the album that was released in 1999, plus 17 previously unreleased songs that include studio jams and early versions of Afraid of Sunlight tracks like “Beyond You”, “King”, “Out Of This World” and “Beautiful”.

It is available to pre-order now and we will be hand signing a special A4 sized print for anyone who orders from us (limited to the first 4000 orders).