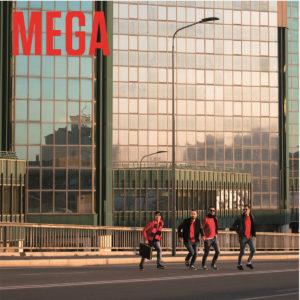 Released four years on from that Lucas inspired disc, ‘Narcissistic Punk Rock Disorder’ is every bit as good. Mega could certainly be accused of sticking to a formula in terms of song writing since its ten tracks continue to flaunt an obsession for cinema and TV, but in terms of musical arrangements, the band have really branched out. Yes, there are a lot of Ramones influences – something that’s still very clear on the bulk of the straight-up speed driven pop punk of the title track and during the brilliant MxPx inspired ‘Losers Will Never Win’ where drummer Rafaelle shows how tightly he can lock into a hard rhythm – but they’re no longer just a Ramonescore band. Fans will also experience a few moods much closer to power pop; for those who can keep an open mind and don’t just want – or expect – wall-to-wall punk, that willingness to expand actually leads to a much more interesting release.

Still keeping the obvious Screeching Weasel influences of their earlier records ‘The Bird With The Crystal Plumage’ offers some fantastic riffs and the approach is tough but lean; the band certainly know how to get the best, even though their chosen genre can sometimes seem constrictive. As if realising that the track needs a little more, a mid section slows things down while simultaneously cranking the volume of the guitars. In doing so, a semi-hardcore riff collides with an equally hard drum part in a demonstration of Mega’s abilities to really rock. What’s of greatest interest here, though, are the lyrics. In retelling some very basic elements from Dario Argento’s same named giallo film from 1970, it presents the coming together of cult Italian horror cinema and Ramonescore sounds…what’s not to like?

Another Argento inspired piece, ‘Four Flies On Grey Velvet’ opens with a taut riff and shrill lead guitar that echoes the more commercial aspects of Screeching Weasel, before dropping into a verse that sounds like a harder and less commercial version of Teen Idols. With a simple harmony vocal applied sporadically against the punchy sound, these two minutes are very assured. In lots of ways, Mega have opted for pop-punk by numbers, but their execution of that style is almost flawless. An album highlight, ‘Electric Dreams’ places a barrage of muted guitar riffs against a relentless drum part, allowing Mega to tackle some straight pop-punk with real guts. It’s not all speed at the expense of tune, though: a twin lead guitar break lends a somewhat unexpected hard rock detour while a really infectious chorus (obviously inspired by the terrible 80s movie with the fantastic theme song) really shows Mega’s gifts for a massive hook. The likes of New Found Glory wouldn’t have offered anything this good even at their peak.

Showing more of a gift for melody than ever before and inspired by the American TV series Parks & Recreation, ‘L’il Sebastian’ further explores Mega’s collision of pop culture and punk. On a track that stokes up the harmony vocals against a deep and rhythmic backdrop, there’s speed and melody aplenty, but once you’ve adjusted to the slightly more commercial sounds (complete with vocal filters), there’s a track that’s far more contemporary for the time of recording. It’s more Rise Against than Johnny & Joey, but still very cool. Also very commercial, ‘Lazers and Ventolin’ takes an overdriven guitar sound with punk pop edges and applies that to a great power pop tune. In comparison to their earlier works, there’s a lot more filtering, but it actually works in context of the song, especially given the bubblegum-ish vibe from the main vocal melody. Apply that to a drum part that sounds as if it’s constantly inviting handclaps and an obvious love of the Ramones’ songs derived from Phil Spector teen dramas and it gives the album an instant highlight.

Those power pop chops come into their own even more during ‘North Rhine-Wesphalia’ once Mega latch onto a fat opening riff. muted guitars draw more heavily from the 1982 skinny tie brigade than CBGBs’ finest, but the band show a real affinity for the style. Taking the jagged sound in their stride, there’s plenty enough room for the album’s most melodic vocal which, combined with a huge chorus hook, deserves to win the band new fans. Sure, it’s at the poppy end of the pop-punk scale, but it’s lean and so well arranged, you can’t help but love it. Returning once more to Argento, ‘Cat o’ Nine Tails’, is very much a Ramones inspired banger that’s heavy on the bass and even bigger on a catchy hook, while ‘P.S. You Suck (The War Is Over)’ sits comfortably between Mega’s two best styles, throwing out an infectious hook against a tightly wound riff as it goes. The escalated melodies really make the track and, as such, lovers of MxPx and The Lillingtons should find so much to like, especially those not adverse to punk with a distinctive Euro accent.

Since the beginning of Mega’s career, there’s been a sense of each record being better than the previous and ‘Narcissistic Punk Disorder’ is certainly no exception. Its musical detours are very welcome, too, since a punk band that knows the importance of stretching out is a band with a little more longevity than most. What really makes the album great, though, is knowing it was created with an equal love of Ramones, Screeching Weasel, The Apers and Argento. More than just Ramonescore or pop-punk, Mega are now the champions of giallo-punk, something that very much deserves to become a broader sub-genre of the Euro scene. A highly recommended listen.