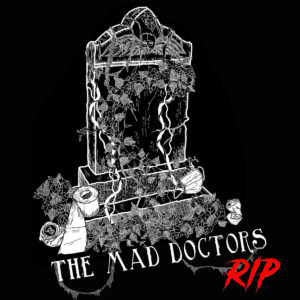 Sneaking out single tracks is all well and good to keep the momentum going, but some fans hankered after a full-length follow up to ‘…Just Sharks’. Since that was one of the most essential underground records of 2017, The Mad Doctors surely had to follow that up sometime?

Nope. In the summer of 2019, the band announced their split. As a parting gift, ‘RIP’ comprises the band’s final recordings which, in their own words, show “the Docs at their heaviest and nastiest.” That theory can certainly be applied to the heavy blues of ‘Poop Tour’ where the band take a few riffs that sound closer to their stoner-infused label mates Sun Voyager and mix those with their more distinctive, heavily treated space-rock vocals. Less garage surf and much more a head trip, the track really showcases Seth Applebaum’s driving guitar work, especially towards the track’s end where he stokes up the distortion and feedback to punctuate the early Monster Magnet moodiness. The spiky ‘Nerd Alert’ retains the heavy bass sound and adds more distortion than ever, but thanks to a faster riff and an upfront drum kit, there’s much more of the heavily reverbed garage rock sound you’ve come to expect. With Greg Hanson smashing the hell out of his drum kit, it’s pretty cool and raucous, but it goes deeper than a mere noise-fest. Various careening riffs mix a garage rock sound with a punky attitude and a vocal refrain (although half buried) taps into something worthy of the early Hives. This is not just an EP highlight, but a career highlight.

More typical of the Docs’ older works, Truancy Man’, especially, is a match for anything on their previous two LPs. Utilising a semi-clean, hard edged riff to kick off, they reinforce some really old school garage rock roots. It’s got the fuzz of Nuggets’ most wilful acts combined with the sheer thrills of Roky Ericsson, so for extant fans, it’ll be an instant classic. For those coming to the band anew, it provides reason enough to backtrack and check out the two full-length releases. Finding a groove in something a little punkier, the intro to ‘Aggro’ delivers a killer riff. Any leanings towards punk are quickly swept aside with a heavy treated vocal and a lead guitar throwing out a two note riff like an old fashioned siren, before the track peaks in a barrage of drums and frenzied garage-inflected vocals. There’s a lot to enjoy throughout, but things definitely sound at their very best when the band drop into an extended instrumental break. Pushing Joshua Park’s uncompromising bass work higher into the mix as he duels with some angry lead guitar work, it’s the sound of the Docs on full power. Last up, ‘Not Absolutely’ is at first a little more subtle, with a more spacious arrangement featuring a rattling rhythm pierced by lead guitar howls. The vocal performance is very sympathetic to this older garage rock mood, but things change quickly enough on the chorus once Joshua and Seth reach for the distortion and The Mad Doctors blast with their heavier edge. There are some even more aggressive sounds to come as the instrumental coda features a band winding up the distortion and intensity in the manner of a set closer by the UK’s own The Fierce And The Dead. It’s very much a case of going out with a bang.

This final EP showcases the most cult of cult bands doing what they do – or rather, did – best. Yes, it might be heavier in a couple of places, but it’s still absolutely loaded with uncompromising garage rock sounds…the best of which sound like throwbacks to the debut LP. “Sometimes you’ve got to say goodbye in your own way…” read the The Mad Doctors’ parting message…and indeed they did. ‘RIP’ shows no signs of a band ever wanting to become more commercial or accessible – it’s the sound of three guys giving their all and hoping that fans and friends will join them in one final thrill ride. For the select few whom were aware of the band during their all too short lifespan, this adds a couple more classic tracks to their legacy. Recommended.