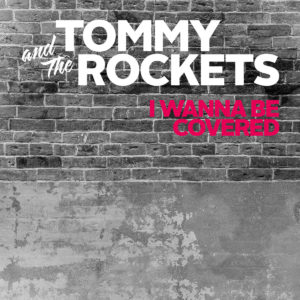 Best of all is the version of ‘Carbona Not Glue’. You’d be hard pushed to call the original the best Ramones tune ever – it’s seemingly nobody’s favourite – but it does have the distinction of being a track the world was denied for decades after it’s withdrawal in 1977. Instead of hammering through the number in the most obvious Screeching Weasel or Apers like way, Tommy has not only chosen to lighten things up, but also present a thinner power pop guitar sound, having the effect of making it sound more like a tour de force from The Modern Lovers than a moment that helped define pop punk. With a cleaner vocal too, this comes across as potentially accessible to those who wouldn’t necessarily choose pop-punk as an every day listen.

Wringing it for all of the 50s kitsch he can, Tommy ensures a great backing vocal arrangement becomes the main focus of his take on ‘Rock ‘N’ Roll High School’. Again, things lean further towards the pop while still playing faithfully to the original cut. Despite an especially weak drum sound, It works well enough, before ‘Oh Oh I Love Her So’ brings sunny vibes across a couple of minutes worth of Spector-ish homage which is obviously well suited to Stubgaard and never a million miles away from his own brand of power pop. It would have been nice to hear this one played less straight, but as it is, Tommy sounds like he’s having a good time. Ignoring a drum sound that has no real punch, Stubgaard powers through ‘She’s The One’ in a way that makes it sound like he’s keen to push the 60s angle but hasn’t quite plucked up the courage to make any imaginative changes, while the lesser mentioned ‘Locket Love’ sounds more like The Queers’ version than the Ramones original, again, making the best use of a solid backing vocal arrangement.

Elsewhere, ‘Havana Affair’ and ‘Listen To My Heart’ are literally hacked out in such a way that you might just move on and reach for the originals, but luckily ‘I Can’t Give You Anything’ fares better, especially when played with a little more bounce and louder handclaps than the Ramones would ever dare commit to plastic. It takes more than handclaps to win over the more demanding listener, of course, so it’s worth noting that Tommy’s slightly accented and slightly brattish vocal is also at it’s strongest on both this and a spirited ‘Don’t Come Close’. The latter is a cover that takes the opportunity to strip back anything punky and in doing so, Tommy branches out a little and reworks one of the Ramones’ more underrated numbers with more of Flamin’ Groovies-esque twang.

In a world where Shonen Knife’s ‘Osaka Ramones’ exists, almost everyone else mining the Ramones back-cat for inspiring covers will come up short. Despite that, ‘I Wanna Be Covered’ is created out of love and is worth hearing if you’re a fan of either the Ramones or (more likely) Tommy And The Rockets. Even with a low budget recording and drum programming, it’s fun enough.