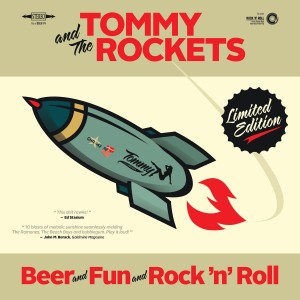 Although a new band for 2016, Tommy And The Rockets is a collaboration between two familiar faces – multi-instrumentalist and sometime Hitchcocks member Thomas Stubgaard and New Trocaderos songwriter Michael Chaney. Between them and their love for good old fashioned power pop and garage rock tunage, their debut release ‘Beer And Fun And Rock ‘n’ Roll’ results in some lean, mean and no-frills nuggets. The album’s ten tunes, each clocking in at three and a half minutes or less, are the kind that John Felice would have killed to have had the foresight to have written in ’77.

As the title suggests, ‘Here Comes Summer’ is a shining tribute to the surf pop of Brian Wilson, albeit skewed through a more modern set of eyes, which results in a tune that sounds like a Wilson/Love composition as retold by Geoff Useless. While the sharp rhythm guitar work is enough alone to carry the bulk of the tune, it’s the shift into a second tune used as a bridge that recalls the Wilson love even more, where a barrage of “wee-ooh”s add that extra homage to a more innocent past. ‘Take My Advice’ stokes up the bubblegum harmonies across a number that has roots in the 1960s, but gets dressed in late 70s garage rock clothes. As before, the guitar tones are fab and the vocals even better, with some killer harmonies that evoke the kinds of sounds The Groovie Ghoulies and The Queers used to aim for, only to come up slightly short so much of the time. While it conforms to some very tried and tested ideas for hooks and melodies, it might just be one of the best tracks of its kind not to feature on The Connection’s classic ‘Labor of Love‘ long-player.

‘Mommy’s Little Girl’ has the air of demo from the Brill Building, only then given a charming and appropriate send off by the kind of band beloved by Little Steven’s Underground Garage. The love and attention afforded to this retro style by the writers and performers alike is so impeccably observed, it’s actually damn near impossible to spot when it was written, while the sharp edge of ‘You Want Me’, a superb arrangement combined with a repetitive hook, presents another retro offering that shows off The Rockets’ preferred style in a succinct two minutes flat. That’s all the time it takes to form a bond with either of these tracks; particularly in the case of the latter, as the Rockets drop a particularly effective earworm that sounds like a cousin of The Queers’ nineties tune ‘Don’t Back Down’ and in doing so, potentially win over prospective listeners. ‘Miss You So Much’ brings a slightly grubbier guitar tone to the fore before mixing up a world of harmony vocals across a chorus carrying a message that’s universally understandable. Musically, it’s only a small sidestep from ‘Take My Advice’ at first, but the addition of a rock ‘n’ roll piano solo at the midpoint – supplied by The Connection’s very own Kris Rodgers – lifts everything to a new level. The Ramones were Stubgaard’s earliest musical heroes and his love for them sometimes comes across during ‘What Am I S’pose Ta Do’, a Phil-Spector-through-the-mangler affair that shamelessly pummels the listener with a barrage of backing vocals and repetitive lyric that isn’t too far removed from something “Da Bruddahs” might have toyed with during their drastically overlooked ‘Halfway To Sanity’ sessions. In other words, it’s relatively simple, it’s happy to deliver combination of garage rock and retro schmaltz…and it’s all good.

Kicking off with three sharp chords and a hard stereo split, ‘Need Your Love’ bounces along with a rock ‘n’ roll revivalist heart and yet another killer hook. The maximum use of harmonies pitched against a strong rhythm and hard drum sound pushes it very close to The Connection once more, but that’s no bad thing…and in just over two minutes, The Rockets deliver another instantly likeable rocker. Taking a blueprint that sounds like the early Beach Boys retooled by Jonathan Richman, ‘Silly Teenage Love’ is the bubblegum hit that escaped the clutches of The New Trocs, replete with a fifties inspired thin guitar sound. Here, the old style song writing of Mike Chaney sits perfectly with Stubgaard’s thin but natural voice, while drummer Brad Marino holds it all together with a solid backbeat. If the Rockets’ fascination with the 60s replayed through a postmodern, knowing filter hasn’t worn thin by this point then, naturally, chances are, you’ll dig this…and then some. Bookending each end of the release are two full-throttle affairs: the title cut adopts a heavy twang and sharp downstroke of the guitar set against a carefree vocal and lyric while – had the dice fallen differently – the beat heavy ‘Time To Rock’ could’ve be a Trocs workout. While neither track particularly expands the Rockets’ repetoire, both are winners, demonstrating a purely retro sound with maximum class and minimum effort.

Championing a style and an attitude that screams pop not politics, Tommy And The Rockets guarantee fun, fun, fun, whether or not you own your own T-Bird. It’s smartness is all in the faultless homage rather than hidden in a lyrical message, but if you value fun over fussiness, ‘Beer And Fun And Rock ‘n’ Roll’ is a must hear. Beer not supplied.