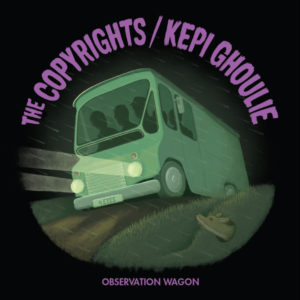 The Copyrights side features two very melodic workouts, both heavy on the vocals. The stronger of the pair, their cover of The Ghoulies’ ‘Are You Passionate?’ blends classic pop-punk riffs with more intricate guitar overdubs and a whole world of gang vocals. The tone and speed of the riffs is Copyrights by numbers in many ways, but that only means the band are able to focus more on reeling in the listeners with a massive hook. The way those gang vocals almost echo Swingin’ Utters circa ‘Poorly Formed’ gives The Copyrights’ melodic style some bigger teeth in places and all things considered, it’s a great track. Repeated listens only reinforce a feeling that it’s incredibly infectious. ‘Welcome Wagon’ is a little trashier in places and occasionally makes good use of a muted riff and a much heavier bass sound, but classic pop-punk is always at the forefront of everything, Again, the gang vocals are in full effect and while the chorus takes a little longer to embed itself, eventually it shows all the signs of being a worthy addition to their legacy.

As for Kepi Ghoulie’s side, fans are given a complete contrast with a double whammy of semi-acoustic power pop. Kepi’s voice remains very distinctive and that’ll be enough for fans of the ‘Re-Animation Festival’ disc to find enjoyment. If anything makes a lasting impression, though, it’s the lyrical content this time out. The thin sounding ‘Observation Day’ marries quirky lyrics with a full on guitar jangle, before introducing occasional parping noises that sound like they would suit an accordion. The stripped down feel often number feel like an experiment from They Might Be Giants and, as such, it’s very one of those tracks that wavers between fun and annoying – and a whistling solo more than suggests Kepi is fully aware of this, gleefully embracing any potential irritants! His rendition of The Copyrights’ ‘Four Eyes’, meanwhile, takes a similarly stripped back stance and what actually transpires is a feel-good tune that sounds like a loving tribute to a Dr. Frank recording. You’d think the rather childish viewpoint of getting new spectacles would wear thin quickly, but it shows Kepi not taking himself too seriously…and that really helps to carry things through.

‘Welcome Observaton’ is home to one of the best Copyrights recordings ever (it doesn’t matter that it wasn’t self-penned) and that is enough alone to recommend a purchase. This EP may sometimes edge a little further towards novelty than some of their prior works (together or separately), but that’s not always a bad thing…especially if you’re approaching your pop-punk fix with a much needed injection of fun in mind.