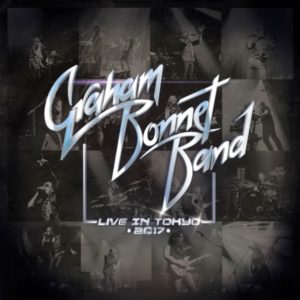 Predictably, the tour for the album took Bonnet to Japan, where he remained a huge live draw. The Graham Bonnet Band played various sets of career spanning material, but the tour delivered a surprise when Gary Shea stepped in on bass for a show in Tokyo. With the band briefly adopting the Alcatrazz moniker, that show was a fine celebration of a much-missed band. With highlights eventually released as ‘Parole Denied – Tokyo 2017’ on CD and DVD, this was a fantastic momento of something most unexpected, but it still left European fans wondering how the other Bonnet Band’s performances measured up.

Two years on from the Japanese gigs, The GBB finally get their full dues on ‘Live In Tokyo 2017’, a companion release to the Alcatrazz live set. The sound quality is amazing: as the opening notes of ‘Eyes of the World’ fade in, there’s a crispness that’s missing from other Bonnet related live releases; it’s so clear, you can even hear various audience members clapping out of time. As the band launches into the classic number’s opening riff, the sound is live yet relatively polished. There’s little doubt of the authenticity, though, since Bonnet’s vocals come through loudly with the right amount of reverb. He’s in very confident voice, which is a good thing considering guitarist Conrado Pesinato sounds poised to take centre stage at various points, with the potential to drown out the rest of the band.

The same kind of spirit carries into the other classic numbers in the early part of a fifteen song set, with great versions Bonnet’s solo singles ‘Night Games’ and ‘S.O.S’ – both fine melodic rockers that compliment the newer material. When revisiting Impellitteri’s ‘Stand In Line’, there’s an equal amount of professionalism in the performance, regardless of the song being arguably inferior. The Impellitteri track is especially impressive: bypassing the cheesier 80s attitude of the chorus and just focusing on the performance, Bonnet is on top form and although the mix is a touch muddy in places, the pairing of Pesinato’s guitar work and Jimmy Waldo’s keys adds weight to any argument that the Graham Bonnet Band might just be the strongest band Graham has fronted since the early 80s.

There are only three songs from ‘The Book’ included in the set, but each is performed with such flair and confidence you’d think they’d been live staples forever. ‘Rider’ even sounds like something drawn from Bonnet’s 1981 LP ‘Line Up’ on this occasion, while the much harder edged ‘Into The Night’ and ‘California Air’ are as much a showcase for the guitarist and Mark Benquchea on drums as Graham himself. On the former, the volume of Mark’s bass drum pedals even clips the audio in places which has the welcome effect of reminding the listener of the live source. When placed against a string of classics, it’s hard to pick any of these as setlist highlights, obviously, but with near flawless performances of each, they’re a great reminder of ‘The Book’s strongest offerings.

When it comes Rainbow’s ‘Love’s No Friend’, it’s easier to come away with mixed feelings. The general punch in the arrangement is great – between Beth-Ami Heavenstone’s bass sound and the ever faithful Jimmy Waldo doing his utmost to channel the great Don Airey throughout, there’s so much to enjoy. However, it manages the dubious honour of being the performance’s weak link due to Conrado never quite matching Ritchie Blackmore’s finesse and Graham being a touch over-zealous. He starts out with best intentions, but by a couple of choruses in, he’s belting at full volume almost as if he’s a little bored with singing this song after so many years. If that feeling isn’t quite clear enough, as it pulls into the big finish, he’s decided that loud improvisation including the words shit and motherfucker linked by an inaudible ramble would make things better… Oh well.

Things quickly get back on track with a a trilogy of numbers from MSG’s 1981 LP ‘Assault Attack’. ‘Dancer’ could’ve been wobbly considering the band needed to tackle some tricksy harmonies, but everyone sounds pretty good throughout while Graham takes a confident lead without too much bombast. A lovely version of ‘Samurai’ seems to be a great showcase for the band more than Bonnet himself, again suggesting a real strength and confidence in this line up. The way Waldo’s keyboards flow into the rhythm section on a very chuggy verse gives a real sense of the recording being from a live source, while Conrado drops into a punchy riff with ease. In lots of ways, this track is one of the most obvious links between Bonnet’s prolific past and his place within the rock scene at the time of recording. Rounding out the Schenker section of the show, ‘Desert Song’ is the best of the lot – it’s big on performance, but bigger on live atmosphere with a very 80s riff in the driving seat and Graham putting in a terrific performance. It sounds great on record, years after the event; for those lucky enough to be at this show, it must’ve been outstanding…

Nearing the evening’s end, the evergreen ‘Since You’ve Been Gone’ really shines and the few wobbly vocals only add to the live feel and ‘Lost In Hollywood’ gives the band a last opportunity to give everything their all. It mightn’t be the best Rainbow tune on record, but live, it comes with so much bluster it’s so easy to get swept along with the band’s force. The omnipresent ‘All Night Long’ seems to please the attendant crowd even though it’s very much one of those old tunes that might’ve outstayed its welcome by this point. However, the fact that Bonnet almost sounds like his 1980 self throughout the performance is a major plus. It might even make up for those terrible Blackthorne recordings.

‘Live In Tokyo 2017’ relies far more on nostalgia than the newer material, but when it comes to someone with the kind of legacy Bonnet has built over the years, that’s only natural. There are various Graham Bonnet related live discs in circulation, but between a great setlist, fantastic audio and a largely inspired performance, this is one of the very best.