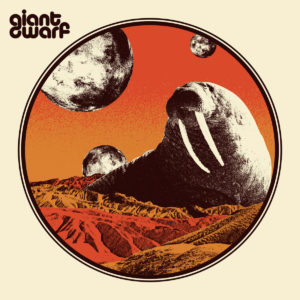 An instant highlight, ‘Golden Walrus’ at first suggests big things afoot with a fuzzy riff emerging from a solo guitar in the left speaker channel before the whole band takes the riff and truly runs with it. The effect is almost as exciting as the first time you heard ‘Green Machine’ by Kyuss and the bristling energy that came with that performance. Moving through the track, you’ll hear some superb wah-ed guitar, heavy blues leads and even a foray into a space rock freak out with various electronic treatments. It seems almost inconceivable that so much could be packed into four minutes, but here it is: a weighty testimony to space- and stoner rock classics, while simultaneously taking a retro style into the future. In a similar vein ‘Depler’ stokes up a wall of slightly distorted guitars bringing a groove that’s somewhere between Kyuss at their best and Fu Manchu at their punchiest. The twin guitar sound truly makes its presence felt during the instrumental bridges, before an odd, almost cinematic instrumental break introduces a world of weird drones and clangs. Their interest in taking the listener on a trip is at its more obvious here but isn’t ever heavy handed enough to ever detract from the great song that surrounds this freaky detour. A brief instrumental, ‘Strange Wool’ doesn’t necessarily bring anything new to the table but it shows how well all all five musicians gel. It’s really allows drummer Luke Drag cuts loose, as he steers the band through several passages of crashy hard rock with a fuzzy, bluesy edge, while ‘High Tide Blues’ fuses hard rock and blues in a way that gives the drums enough room to truly swing. Adopting a heavy swagger on the pre-chorus, there are traces of Corrosion of Conformity and Zakk Wylde at play – if it had been obvious before, it’s really obvious now: this retro sound has a real passion at its heart. It might rely a great deal on familiar recycling, but you’d be hard pressed to find the style played much better than this. It’s fab. The way vocalist Aaron Soppo is able to call above the heavy chorus riff with such clarity almost makes the number on its own. His performance seems effortless.

Dopping into a simpler sound while retaining the bluesy swagger, ‘Black Thumb’ accentuates the fuzzy sound of the guitars and claustrophobic feel of the final mix. The tightly knit arrangement showcases a band who love a cocky swagger in the main – this almost feels like a Chapman and Chinn glam rock stomper re-imagined by Dave Wyndorf – but the riff is no match for the hook, as a repetitive lyric proves ridiculously catchy…in the way that most stoner rock bands just wouldn’t be normally. Giving Luke even more room to flex those percussive muscles, ‘Repeat After Defeat’ features some great tom work throughout, especially on quieter sections where heavy drums are underscored by echoing howls of guitar. While on the surface, this’ll sound like another stoned out space-rock head trip, there’s something about its inherent darkness that cuts through that sets it apart; in fact, in some ways, it’s actually closer to a couple of tunes from late period Screaming Trees than your run of the mill stoner/psych, and that can only be a good thing. By the time the singularly named Rick steps up for a corker of a guitar solo, it’s easily another album highlight.

Somewhere between all of the Kyuss love, ‘Disco Void’ hits with something much quirkier, as their patented world of fuzz meets a more commercial groove on a track that sounds as if it were inspired by a couple of Queens of The Stone Age singles. Unlike Queens, though, Giant Dwarf use their fuzz for the good of the song, rather than just in spite of it. They also recognise that there’s only a solid four minutes to be had from this fuzz-rocker and so, thankfully, resist all temptation to add a three minute instrumental coda that’s all dirge and no emotion. As with the previous tracks, the band’s general tightness speaks for itself, but if anything leaves a lasting impression its Arron’s vocal style. He puts in strong performances throughout the whole album in a way that melds melody to various retro space rock and stoner tropes, but on this number he sounds especially inspired. Finishing with a six minute epic, ‘The Deluge’ moves through several moods beginning with straight up heavy stoner rock peppered with echoing vocals, showcasing Giant Dwarf’s 70s-through-90s-filter tendencies. At first, it seems as if the highlight here will comes from another fine vocal melody which, in this instance, pulls a lot of greatness from a descending melody from a chorus. However, a few heavier Sabbath-isms challenge that, before the band switch gears completely. An unexpected turn introduces an obvious homage to Neu!’s ‘Hallogallo’ within the riff; it’s something that never seems to get old, as well as signifying that everything within the previous couple of minutes can now be considered passe. This shows an obvious range to the musicians’ collective talents, before reverting to something heavier to bow out. It’s a track that rewards multiple listens – a truly superb ending to an album with no weak links.

There are only eight tracks on this debut and while each one sounds like something that could’ve been borne from any point in the previous quarter of a century before this release, each one feels like a miniature masterpiece. This is an album loaded with great riffs and hooks. The love for the style shines through at every turn and the fact that these Aussies have managed to create something with so much density without the songs ever feeling laboured is a testament to some great talents. There are so many stoner bands that could benefit from listening to this… It’s a terrific release.