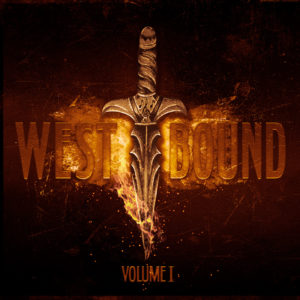 Showing off a band that’s absolutely unashamed in the face of a hard rock cliché, ‘Never Surrender’ gets things album underway with an old style metal number that’s built from the best bits of Dokken and ‘Lionheart’ era Saxon. Immediately, West presents himself as a someone who seems more comfortable with these players and Z dominates with a performance that quickly demonstrates West Bound’s chief interests. A key lyric, “Raising the stakes / keep on playing the game… Never surrender, keep your eye on the prize” throws at least three clichés into as many lines, yet somehow it works…and with a ferocious lead solo blending seamlessly into a brilliant Iron Maiden-esque twin lead, the album gets off to a fine start by wearing its decades-old denim and leather with pride. Adding a touch more melody, an easy stand-out ‘Ain’t Gonna Drown’ mixes the hard rock with an almost blues-rock swagger, ending up sounding like a much heavier version of something from Whitesnake‘s ‘Slip of The Tongue’, or a Lynch Mob classic. Obviously, West is a natural fit for this style, while the heavy drums supplied by Dave ‘Chilli’ Moreno add an almost Bonham-esque weight to everything. Rather than labouring the heaviness further, this actually results in something approaching classic hard rock. It would already be a great tune, but a quieter and almost trippy interlude (a blatant homage to a similar moment from Led Zeppelin’s ‘In The Evening’) makes it even better. In a similar mood but a mite heavier, ‘Keeper of The Flame’ allows a dirty blues guitar to underscore a mid-paced stomp. It feels a tad scrappy at first, but by the time the chorus settles in, it becomes another listen that more than suggests that this album might be one of the best melodic metal discs since Burning Rain’s ‘Epic Obsession’ hit the shelves back in ’13. That chorus stokes up a few gruff harmonies, again placing West somewhere between an 80s metal belter and David TrouserSnake. Along with a few well placed wails from Z’s six string, it has all the important hard rock bases covered. For best results, crank the volume knob and try not to give a toss about fashion!

A touch slower, ‘On My Own’ applies the kind of chorus you think you’ve always known to another tune that sounds like an old Lynch Mob number. Roy Z and second guitarist Jimmy Burkard work hard to keep a reasonable groove, but their best efforts are overshadowed by West, reverting to his bombastic Resurrection Kings guise, which might have the effect of turning off a few listeners. That said, the number is made of such strong stuff that it seems to fit the rest of the album well, despite not always being quite so melody conscious. With a 90s edge meeting with an old 80s hook – something at which Roy Z has always excelled – ‘Roll The Bones’ gives the whole band a terrific workout. Occasionally sounding like a metal band reworking an old Steve Vai tune during the intro, there’s instantly a feeling that the next few minutes will be entertaining. As the track gains momentum, the guitars take on a relentless chug, which makes a great counterpoint for West who’s still clinging to a very 80s performance. The dirtier sound in places might not always appeal to those who harbour a love for an even older style, but with a lot of groove and a big hook, this number is actually great fun. Although a bit more throwaway, the way ‘No Room For Sympathy’ tears headlong from the outset brings a welcome reminder of Black Sabbath‘s ‘Mob Rules’. Although this could be considered meat and potatoes work for West Bound and is outshone by a good few tracks during this album’s fifty minutes, a catchy enough hook and a shred-fest of a solo both suggest it would be great in the band’s live set.

In a complete change of mood, ‘Turn To You’ allows the quieter end of West’s range to be heard – not something that happens too often, it has to be said. Occasionally, he channels the late Andrew Wood with a slight Plant-ism, but mostly he’s his own man, rising from the soulful to full rock belt with ease. Meanwhile, the rest of the band turn in fantastic performances throughout, from the dual acoustics at the start – impeccably played – through the soaring lead guitars always adding emotion, to the big climax…it’s all terrific. Thirty years previously, it’s the kind of thing that would have been a highlight of a Skid Row or Kingdom Come LP; at the time of release, it’s going to be a favourite among a more select crowd, but a favourite nonetheless. Finally, the (expected) overt Zeppelin love rears its head for ‘Traveler’, a grandiose workout that has more than an echo of ‘Kashmir’, crossed with something from the Coverdale/Page album. Heavy synths applying occasional snake charmer melodies are heavy handed and in terms of homage to a particular style it certainly is not very subtle. However, if you can look past that, it’s a great performance: West sounds like a ‘1987’ era Coverdale and manages to put in one of his best vocals this time out and when Z locks into a riff with bassist Jason Cornwell, there’s a hell of a lot to like about this musical throwback. As everything grinds to a halt after exactly six minutes, it’s been long enough to feel genuinely epic, yet at the same time, it still feels as if there were at least two more minutes left – or at least one more sizeable guitar solo to be heard.

‘Volume 1’ has an incredibly old spirit. It quickly conjures memories of those days when you might find Dokken, David Coverdale or Y&T gazing from the cover of Metal Hammer. Any one of its eleven songs would’ve been destined for Tommy Vance’s Radio 1 Rock Show circa 1990 and, somehow, this desire to stay firmly within the confines of a musical past provides most of the album’s charm. At the time of release, though, it’s unlikely to have much appeal beyond the faithful few that buy each and every one of the Frontiers Records releases as soon as they’re out. That’s a shame since West has given the world an album with an old soul and a big heart that deserves so much better than that. If you like hard rock and classic melodic metal in the vein of Dokken, Doug Aldrich’s Burning Rain or Voodoo Hill, in all honesty, you just can’t afford to miss this.