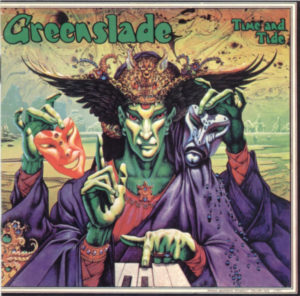 ‘Spyglass Guest’ would be a hard record to beat and, perhaps unsurprisingly, 1975’s ‘Time and Tide’ doesn’t actually try to follow it directly, but instead takes a side-step into shorter and more song oriented material. This approach is at its most striking on ‘Newsworth’ an upbeat prog-fuelled pop-rocker that sounds like Pilot on a freaky bender. Stabbed pianos provide a musical hook throughout and the vibrant approach to the overall arrangement works excellently, with the band sounding rather spirited even if the end result bares little resemblance to previous Greenslade work. A combination of upfront bass (played by Martin Briley, stepping in for the departed Tony Reeves) and an almost new-wavish, drawling vocal also point to a slight change in musical fashions and despite Dave Lawson’s vocal performance being fairly disgusting, the track is very much an album highlight. In a slightly glammy mood, ‘The Flattery Stakes’ also acts as a great example of Greenslade’s penchant for song-oriented material this time out. It’s rumpty-tumpty rhythms fall somewhere between Cockney Rebel and Manfred Mann’s Earth Band and its easy to imagine fans’ heads exploding when first hearing the female backing vocals which come directly from a universe of middle-of-the-road pop. For those willing to keep an open mind or love 70s pop, it’s all superb stuff. With Lawson sounding far more comfortable and the brief instrumental sections featuring occasional forays into something more complex, this number is very welcome reminder that ‘Time and Tide’ sometimes gives the listener something rather wonderful.

A massive misfire comes with ‘Waltz For A Fallen Idol’, a distinctly 70s tune which has a schmalzy mid pace that all too often makes it sound like something written for Rod Stewart. Lawson’s voice is nowhere near up to the job in hand and things go from bad to worse when the number segues into ‘The Ass’s Ears’, a busy prog rock freakout that tries to recreate something as grand as the best ‘Spyglass’ material…only to fail due to an abysmal vocal. Lawson shrieks like a bad Geddy Lee impersonator during the best bits and sounds like an old woman who’s had a fall on the kitchen floor during the worst, so it isn’t easy to love. This is a shame since most of the music is rather good, with Briley really excelling throughout not only as bass player but also offering a few guitar lines that echo Steve Hackett and Andy Latimer’s favoured sounds of the era. Given that Briley, drummer Andrew McCulloch and Dave Greenslade are playing their arses off, it’s a great shame the world was never gifted an instrumental version… The uncharacteristically rocky ‘Animal Farm’ is yet another case of great music/bad singing when the band go for speed and complexity in one hit, sounding like a prog rock act tackling something by Sparks. Lawson pushes his voice to extremes, but undeterred by his freakshow in the vocal booth, everyone else puts in another top performance. Busy pianos jostle with synthesisers; the bass cuts through the wall of sound with a masterful clarity and McCulloch shows how he’s completely adept behind the drum kit…whatever style he’s thrown. The shrieky and quasi-aggressive style mightn’t ever come close to being Greenslade’s best work, but if nothing else, it proves that – unlike so many of the other prog bands of the era – they were able to get a sense of changing musical fashions (spiky power pop was starting to gain an audience across the ocean) and actually progress.

A throwback to older style Greenslade, the electric pianos weaving through the minimalist ‘Doldrums’ are very atmospheric and with Lawson actually singing quietly (mournfully, even), it’s his finest four minutes on a tune that sounds like a revisited and improved ‘Red Light’, while two short pieces entitled ‘Time’ and ‘Tide’ (acting as a de facto title track) delve into a world of seventies indulgence with ‘Time’ showing off a choir of vocals and ‘Tide’ opting for two minutes of mellotron drones. The short playing times actually mean these sound like musical ideas and sketches as opposed to complete ideas, but the busy ‘Catalan’ makes up for that with something that’s very much equal to the best moments of ‘Bedside Manners’. A strident musical hook inter-cut with quieter passages and a busy second keyboard part brings a distinctive melody that manages to be jazzy and proggy but never tiring. It’s a fine example of Greenslade’s double keyboard, guitar free style, before the push and pull between the two moods gives way for a deeply proggy passage where the band try find a musical space somewhere between Emerson, Lake & Palmer and ‘Nursery Cryme’ era Genesis. It’s a tune guaranteed to please old fans even if in places this feels it if it were designed to be a TV theme. Speaking of TV themes, the album’s closer ‘Gangsters’ was used as an actual TV theme, and even for those unfamiliar with the BBC play of the same name, it works brilliantly as a stand-alone tune. Using an off-kilter waltz for its base, a brilliant tune grows with McCulloch fully immersed in a jazz drum part and Greenslade dropping in and out with squirly keyboards that might be the most 70s thing you’ve ever heard…or at least since the last time you played ‘Bedside Manners…’ It’s the kind of thing that feels like it comes up short at just two and a half minutes, but as an example of Greenslade’s prog-jazz fusion in full flow, you’d be hard pressed to find them sounding more vibrant. [A re-recorded version of this with vocals was issued in 1976. That can be found on the CD reissue of Dave Greenslade’s solo album ‘Cactus Choir’, which in the main, is more interesting than ‘Time and Tide’]

Often seen as a bit of a dog’s dinner, sometimes ‘Time and Tide’ is actually very good (‘Newsworth’, ‘Flattery Stakes’) and occasionally it’s fantastic (‘Catalan’, ‘Doldrums’) but due to trying to cram too much into a brief thirty two minutes, it rarely touches the high watermark left by the previous two LPs. It is the sound of a band trying to branch out more but gelling less often, and – with hindsight – it’s easy to hear a band reaching the end of their natural life span.

Hit ‘n’ miss as the studio album might be, Esoteric Recordings’ expanded 2CD edition from 2019 is worth exploring as it offers fans the chance to experience a nine song live session recorded for Swedish radio, mixing the new material with great performances of a couple of old classics.

A particularly punchy take on ‘Newsworth’ is actually one of the genuine highlights, with the unfiltered recording really giving life to McCulloch’s drum fills and Briley’s brilliant bass work. The mix pushing the rhythm section to the fore actually means the wibbly keys take a back seat throughout. What this does, of course, is make Greenslade sound a bit sharper than your average mid 70s prog band…which isn’t a bad thing. ‘The Flattery Stakes’ presents the band in full rock mode once more and the blend of bass and keys on this recording could rank it among the best Greenslade live recordings (better than the various BBC takes included on previous reissues), so it’s a shame that Lawson’s voice couldn’t have been better. The weaker point of the studio album – ‘Waltz For A Fallen Idol’/’The Asses Ears’ – obviously works less well. The sedate style of ‘Waltz’ really loses momentum and Lawson sounds truly disgusting on ‘The Asses Ears’. You can’t win ’em all…

Making up for that, performances of fan favourites ‘Bedside Manners’, ‘Pilgrims Progress’, ‘Joie De Vivre’ and ‘Spirit of The Dance’ range from good to truly magical, with ‘Spirit’ in particular getting across the fun side of the band and a sense of musical camaraderie. Although the recording isn’t in the best definition, the boyancy of the melody is clear enough and the energy in the playing is equal to the earlier BBC session as found on the expanded ‘Spyglass Guest’. Perhaps most importantly, ‘Drum Folk’ no longer sounds like album filler and the recording included here gives some proper context in the live set. While older fans would’ve surely preferred a take from the BBC’s Palace Theatre – had one existed, of course – it’s important that McCulloch’s showpiece is no longer just a memory.

Bringing Esoteric’s excellent Greenslade reissue campaign to a close, ‘Time and Tide’ will forever be the weak link in the original Greenslade story, but coupled with a disc’s worth of extras it now carries a little more weight and a lot more historical importance. If the expanded reissue allows fans to go back and realise that there are at least three essential tracks hidden within, it’s all to the good. Maybe this will even inspire people (both fans and industry types) to re-evaluate Dave’s own ‘Cactus Choir’ and ‘Pentateuch of the Cosmonology’ as part of a further listening project. While neither album has ever been treated fairly or properly in terms of CD reissues, in terms of enjoyment, they are at least equal to ‘Time and Tide’ – if not superior.