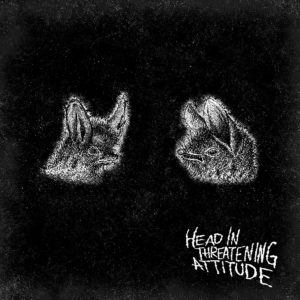 Lots of bands claim to play hardcore punk, but quite often that means hardcore spliced with bits of metal and other genres that dilute the overall feel. On their 2017 EP ‘Toxic Care‘, Natterers genuinely meant hardcore, with buzzsaw riffs played at breakneck speed. Their only concession to any different style came via a few surf punk riffs, but since those were derived from the Dead Kennedys debut, even those had a shrill and unrelenting attitude that could only come from a hardcore perspective. Like a smack to the jaw, that EP was easily the best punk release of the year.

A follow up was eagerly anticipated. 2018’s full length ‘Head In Threatening Attitude’ is everything you hoped it would be…and more. Cranking through fourteen numbers in approximately twenty five minutes, the album has a fantastic energy that just drags the listener along. It’s instantly clear that more money has been spent on the recording this time around – with mastering handled by Dead Kennedys producer Geza X – but a better sound doesn’t mean any attempt has been made to become any more commercial.

The album’s opener ‘Power Tripping’ takes the guts of the classic Dead Kennedys sound, showing how some things never go out of style. The influence is reinforced by Thomas’s hard sounding lead guitar work that cuts through a superb punky riff, but underneath that, the furious bass work lends something more natural throughout. The band’s sound has been shaken up and is far beefier than before, but every care has still been taken to ensure there’s still a huge rawness overall, especially concerning Emma’s vocal (credited on the sleeve as “Shouting”), as she yells and sneers across a particularly angry two minutes. The phrase “best foot forward” very much applies.

‘Not Long Now’ shows Natterers to be more complex than your average hardcore band, as the sharp punk riffs are balanced by a superb rattling bass and times where the speed driven aesthetic is broken up by unexpected arty time signature shifts. Going from fast to faster, ‘Defiant (Again)’ taps into a thrash punk mood. Taking the best elements from the Kennedys’ ‘In God We Trust, Inc.’ and Discharge’s ‘Why’ releases, the pace is key to everything, but there’s always a genuine tightness in the overall performance, while ‘Boring Minds’ takes the thrashier aspects and melds them to an irresistibly shouty hook. In hardcore terms, it won’t do anything you’ve not heard before, but for fans of Circle Jerks and early 7Seconds, it’ll be a must hear.

During ‘Drink The Bleach’, ‘Corvid Killer’ and ‘So Much More’, especially, the already classic Natterers sound is captured in truly ferocious style. Emma’s vocals are angry throughout, spitting social messages with a genuine fury (made all the better by an obvious English accent), while the rest of the band latch on to some of the best punk riffs you’ll hear from a DIY band at the time of this recording. Although Dead Kennedys provide the overall influence as very much expected, there’s something about Emma’s unrelenting delivery that also brings to mind the phrasing of the legendary Keith Morris from Circle Jerks/OFF!, resulting in a combination of punky sounds that are amazing. The band’s new rhythm section featuring Dave (drums) and Rob (bass) really give these tracks a huge kick up the arse that helps make Natterers sound so much more professional than before. In short, in hardcore terms, these numbers border upon perfection.

There are a couple of times where things slow down enough for Natterers to usher in a couple of different moods, but the performances remain resolutely angry. ‘Dead Man Can’t Catcall’, in particular, shows how much the band has grown during the year spent writing and recording. A moody, attitude driven number that throws out muted garage rock chords, there’s instantly something here that Natterers possibly wouldn’t have attempted previously, whilst ‘Theme Song’ – a short instrumental – brings more of a focus to Thomas’s surf rock interests. Despite stretching out, the fire and discordance present throughout these numbers make things clear this is still the Natterers, but are important shifts with regard to making the album feel varied.

Clocking in at under half an hour, ‘Head In Threatening Attitude’ doesn’t outstay its welcome, but more importantly, the sequencing of the tracks and the presence of those couple of more experimental tunes ensures it’s a record that never gets tiring. If anything, when reaching the end, you’ll want to hear it again straight away… If you liked Natterers before, you don’t need telling how essential ‘Head In Threatening Attitude’ is – but it really is a huge leap forward from previous recordings. Hardcore punk is alive and well…and this Yorkshire contingent sound ready to take on the world.