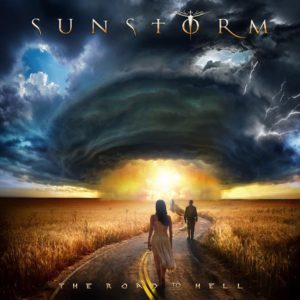 Between 2006 and 2012, legendary rock vocalist Joe Lynn Turner lent his talents to three great albums by Sunstorm; releases which celebrated his many years on the melodic rock scene as well as added to his impressive catalogue. 2012’s ‘Emotional Fire’ was especially interesting as it revisited Joe’s 80s legacy, presenting covers of songs on which he’d originally contributed backing vocals. In the hands of Sunstorm, Michael Bolton’s ‘Gina’ and ‘You Wouldn’t Know Love’ (a big hit for Cher, and old a final voyage into rock for “old two haircuts” himself) sounded as good as ever. Although 2016’s ‘Edge of Tomorrow’ was an enjoyable record and a worthy addition to the Sunstorm catalogue, it gained more of a mixed response for a couple of reasons: firstly, it had a rockier feel and furthermore, it was effectively Sunstorm in name only – Turner was now fronting a completely different band.

Retaining most of the musicians from the ‘Edge of Tomorrow’ sessions, 2018’s ‘Road To Hell’, if anything, is even further away from the original Sunstorm remit. With regard to the musical arrangements, at least fifty percent of this record sacrifices classic AOR melodies for sheer bombast, meaning that – although most of it ts still enjoyable in its own right – this is the weakest of the albums to date. Those who loved Sunstorm for their more AORish tendencies will again be frustrated by the move towards harder things, but there’s no denying that whatever the style or material, it’s Turner who is the star…and luckily he’s in fine voice throughout.

The opening track begins with an extended intro where the band launch themselves into a piece of hard rock that’s somewhere between Yngwie Malmsteen at his most melodic and something slightly more AOR-centric. Driven by new member Edo Salos’s hard-edged drum sound and chugging guitars, this shows Sunstorm at their rockiest, but thankfully things start to level out with the appearance of the vocal. Turner – always aiming for something a bit more melodic – pushes his voice in places but still retains the same sense of charm you’ve always loved from those Rainbow (and early Sunstorm) albums. It’s with the chorus, though, that this asserts itself as a strong opener: not so much 80s gold, but a much tougher take – the kind Heaven’s Edge made their own at the start of the 90s, or the sort of thing beloved by many of the Euro bands signed to Frontiers Records circa 2012. It’s tough, yes, but it is also very catchy; with the guitars scaling back and the keyboards rising, the harmony filled hook is given plenty of space. Moving into a hugely European sound for the title cut, a punchy riff quickly dominates – all power and pomp – before a quiet verse pitches Turner’s strong vocals with a clean guitar sound. The chorus has a sense of bombast that might suit Goran Edman or Joey Tempest more than JLT, but even so he takes the huge sound in his stride. While most people, understandably, will be checking this out for Turner’s voice, the highlight of this track is actually sweeping guitar solo, constantly straddling toughness and melody without feeling the need to dish out anything too flashy.

A genuinely unmissable track, ‘Everywhere’ makes a feature of Alessandro Del Vecchio’s stately piano work which, when joined by a few soaring 80s guitars, creates the backbone of classic melodic rock. Joe has always excelled at ballads and although this has a couple wobbly notes, he puts in a performance that shows that for a man now in his sixties, he’s still a fine performer. As with the title track, the guitar solo is superb and the counter melody during the intro offers some of Simone Mularoni’s finest work. ‘Still Fighting’, meanwhile, effortlessly conjures tough Euro rock with a bigger presence of guitars and a chorus that seems very influenced by Jeff Scott Soto/W.E.T. . It’s meat and potatoes hard rock for most of the musicians involved, but with a great melodic punch, an enjoyable twin lead break and strong harmonies it’s a great listen, especially when played back at volume. ‘State of The Heart’ comes much closer to Joe’s time with Rainbow in places thanks to a dominant Hammond organ that creates a blanket of sound throughout. As before, he sounds absolutely on form – and at ease vocally – especially when tackling a huge chorus that comes across like a cross between early Talisman, W.E.T. and something from the prior Sunstorm disc. Chorus-wise, it’s one of the album’s best tracks, but the album’s slightly dense mix also makes parts of the track hard going unfortunately, especially once a busy solo attempts to rise up – it’s a proper kitchen sink job and certainly deserved a greater separation between the instruments.

A touch more melodic, ‘On The Edge’ has a more spacious verse that relies on a punchy bass and great vocal for most of the entertainment. Between Joe’s contributions, you’ll find some superb twin lead guitars and everything’s in place for a great track. It’s even better if you don’t listen to the barrage of clichés being trotted out about “blood running cold” and “living on the edge as we destroy our world”. Still, it’s positively the poetry of Dylan Thomas compared to Yngwie Malmsteen and his hole in the sky (as per Rising Force’s 1984 howler ‘As Above, So Below’)… The stabbing keys at the beginning of ‘My Eyes On You’ suggest more melody and another bass and vocal dominated verse brings almost more of the same, except this time, the multi-tracked guitars give way for the kind of pompy keys found on a Nightwish ballad. By the time the second verse settles in, it’s a much better track than first suggested – it’s hard and potentially a bit bottom-heavy, but a chorus that’s straight off the first Talisman record soon asserts itself as more than decent old-style rock. Chuck in a flashy guitar solo and you have a track that’ll quickly appeal to fans of Talisman, Zeno and the other huge sounds of yesteryear.

After twelve years and five albums, their musical stance has changed a little but Sunstorm show no sign of running out of steam, suggesting that as long as Joe’s voice maintains this kind of quality, the band will always be there somewhere in the melodic rock sidelines…regardless of line-up or style. For maximum enjoyment, ‘The Road To Hell’ fares best if taken at face value and not compared to previous Sunstorm discs. In relation, it’s the weakest so far, but if you like things on the tougher side or been a fan of Turner’s since the 80s, you’ll still want to invest plenty of listening time.