It’s the first of July. The British summer time has truly grabbed a hold. In the middle of the unexpected heatwave, the intimate Ramsgate Music Hall is hot. Very hot. The sweaty atmosphere isn’t about to dampen anyone’s spirits, though, especially as tonight’s sell out crowd are in the presence of a true cult legend. This is Kristin Hersh’s second appearance at Music Hall – the first being forty eight hours earlier – and it’s the last night of her successful UK tour. Everyone’s up for it.

One very clearly worse for wear man in the second row is, perhaps, far too up for it. As Kristin appears on stage via the venue’s should-be-legendary trap door, he bellows “WOOOOARGH, KRIS!” as if they’ve been bosom buddies forever. Even before Hersh has had time to address the audience or play a note, he’s heckling for 50FOOTWAVE material, even though it’s obvious to pretty much everybody else, that really isn’t tonight’s main focus. Taking it in her stride, Kristin informs him that maybe she’ll “play a 50FOOTWAVE song later” in an attempt to placate him. He still appears to be trying to talk to her as she breaks into the opening notes of ‘Bright’, a performance undeterred by the noise he’s still making. ‘Bright’ sets the tone for Kristin’s performance, with her hard strummed acoustic guitar retaining the presence of a beautiful twelve string. Her voice is husky; haunted even, with the narrative of the song gradually disappearing into the air. It’s tough being a performer without the safety net of a band, but Hersh seems immensely comfortable, even though she can undoubtedly see almost every face in the room. [The drunk man’s disregard for occasion will become quickly tiresome, much to the annoyance of people nearby. Between the first five songs, he heckles for ’37 Hours’ and seems to think that Kristin will be interested in the fact he can play it on guitar; he makes other inane remarks and, at one stage, even tries to engage Hersh in a discussion about D****d T***p. He forgets about 50FOOTWAVE, but that’s no real consolation.]

The unwanted interjections show how difficult being a solo performer in a very intimate setting can be. Effectively, Hersh is exposed to the elements. In such a small space, anything could happen. She deals with these disturbances well, but the man could have attempted to get on stage and derail everything. It only takes one person to change the mood of the whole room on a night such as this; thankfully, despite constant wailing – sometimes louder than the artist on stage – he isn’t entirely successful in his campaign of sabotage.

As with the other nights leading up to this final bow, it’s Hersh’s ‘Crooked’ album that’s the best served tonight, with three excellent selections in ‘Mississippi Kite’ ‘Krait’ and ‘Flooding’. These are numbers which fully show off a voice once described as “beautifully damaged”, but also defy their age. ‘Crooked’ still feels like a recent entry in Hersh’s sprawling back cat – it’s hard to believe the album is almost ten years old at the time of this performance. Despite having had most of a decade for those songs to sink in and potentially become favourites, most of the audience is sedate, however. Maybe it’s the heat, maybe it’s the solemn acoustic set up; whatever the reason, for most, it’s time spent deep in thought.

Throwing Muses are re-visited via measured renditions of ‘Cottonmouth’ and ‘City of the Dead’ but in terms of capturing a moment, they don’t touch ‘Your Ghost’, a tune that, tonight, appears especially fragile. From 1994’s ‘Hips & Makers’ album, it’s an easy highlight with Hersh’s shimmering guitar and cracked vocal seeming so pointed, yet at the same time so disconnected. Her one time banshee croon now have given way to something rougher, but that in itself gives this piece – and a few others – a distinctly disarming quality that time seems to improve. Watching as Kristen’s piercing blue eyes stare at a fixed point at the back of the venue as she sings “you were driving circles around me” lends the performance an extra sense of spookiness. The main set comes to a close with a semi-ferocious take on Throwing Muses’ ‘You Cage’ – much to almost everyone’s delight – and it’s a rendition where a few of the fuller and deeper notes let out the ghosts of Kristin’s voice as it sounded back in the 90s; there’s a real passion within the emanating sounds and as her semi-acoustic guitar throws out various soundscapes, it’s a welcome reminder of ‘The Fat Skiier’ and everyone’s younger days. This isn’t about nostalgia, though, it never was. Hersh continues to look forward and work at a pace, as if she is unable to keep the fragments of lyrics and new music locked away, unwilling to endlessly trot out “greatest hits” at gigs for an easy ride. This night – this tour – is a celebration of that unique and creative talent before the unveiling of her eleventh solo album ‘Possible Dust Clouds’. …And, set wise, what a celebration it has been.

Bringing some end of evening serenity, Hersh offers a sparse but pleasing cover of the folk standard ‘Poor Wayfaring Stranger’, a number on which her quieter tones seem to take on a new reverence. While some probably would prefer a couple more throwbacks to the Muses years, it’s a fitting way to end an intimate night…and with Kristin waving and disappearing down the trap door once more, we’re left to contemplate the last hour. There’s no question that the slightly-larger-than-a-living-room space has served her incredibly well. The thought of seeing her somewhere so small is still thrilling after the event… 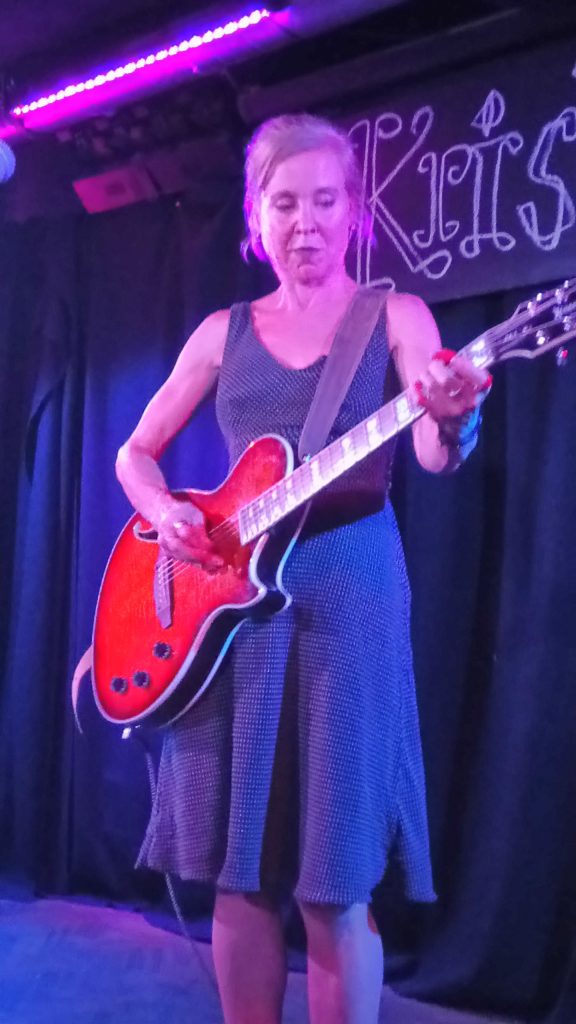