2018 has really been a fantastic year for The Fierce And The Dead. Their third full length release ‘The Euphoric’ has received great reviews across the internet, been championed by Prog magazine and has led to the band playing higher profile gigs. In the previous six months they’ve played their biggest ever headline show and shared a bill with System 7 and Hawkwind. By now, they’ve earned the right to be genuinely considered a cult band.

Hawkwind invited the band as support for a second time in the summer. While Hawkwind fans, on the surface, seem to be the kind of people who know what they like, the band obviously feel The Fierce And The Dead are interesting enough to appeal to their loyal audience. While – as is so often the case – the venue isn’t exactly packed by the time Matt Stevens and company get ready to play, those in attendance know the next half an hour will be…interesting. 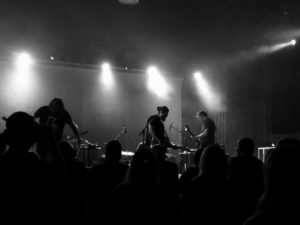 At 7.45, four figures take the stage rather unceremoniously. A few disjointed noises travel over the audience’s collective heads. “That was a number called ‘Tuning Up’…” quips bassist Kev Feazy, while Matt continues to twiddle with a couple of things on stage right (audience left). They nod at each other and without a further word break into ‘Truck’, a tune that pretty much sums up this year’s ongoing success. One of the cruchiest numbers within the band’s repertoire, the performance tonight really pushes forth the heavier aspects of the track – more Fu Manchu and Monster Magnet than your typical Prog mag fare. Obviously, Matt fills spaces between the main refrain with busy clean guitar sounds, but at this early stage of the set, a couple of sound gremlins have yet to be addressed. With everything being bass heavy, it sounds like something with a genuine intent and visually, the band are already hitting their stride. ‘1991’ offers more technicalities, as driving beats as mechanical lead guitars come together in a way that should rouse the audience; Kev’s bass pushes forth with a fuzzy tone that really shakes up everything. Most of the front row are watching intently and while The Fierce And The Dead do not come with a flashy show, watching the musicians working hard to deliver complex material brings its own reward. Neither band or audience has particularly loosened up yet, but a man by the barrier seems to be quite happy doing a bendy-legged dance and there are signs that a few new fans could soon be made. 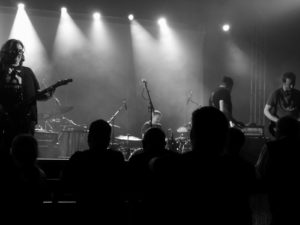 Time for another quick tune up. “We are The Fierce And The Dead”, Kev beams. “We are your warm up band for the evening…and we haven’t got a singer!” He then asks for Matt’s guitar to be turned up and in this one move, all sound gremlins are kicked into touch. During the opening of album standout ‘Dancing Robots’ with its cheeky mechanical riff, Matt’s guitar shows off a fantastic tone, before Stuart Marshall drops into a funky rhythm and second guitarist Steve Cleaton drops into a grinding post-rock riff that’s about twice as heavy as its recorded counterpart. It’s great. A man with a mullet that could rival Jon Anderson’s best frosted effort from 1984 struts across the floor. He’s having a lovely time…and judging by the air guitar that soon appears, he’s a firm believer in the idea that we should dance like nobody is watching. Matt, meanwhile, is really embracing the opportunity to work an unfamiliar stage; he’s leaning forward, glowering at the front row and pulling faces aplenty. ‘Magnet In Your Face’ – a welcome nod to slightly earlier material – exploits more stoner-ish tendencies and provides a great companion to the earlier ‘Drive’, while a bass heavy ‘Verbose’ pushes Kev back into the spotlight, although Matt eventually comes through with some great playing. He’s occasionally waving his guitar over his head, often pulling bizarre faces and eventually reaching a neck-wringing finish. By this point, the crowd has swelled to about three times its original size…and even the late-comers seem to “get it”. 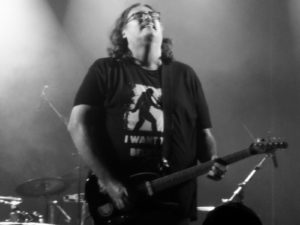 Some more tuning up and unrehearsed banter involves Matt doing various swears and punching the air – he really is chuffed to bits to be in Margate and lending support to the mighty Hawkwind again – before ‘Parts 7 & 8’ really tests Stuart with its shifting between a hefty rhythm that sounds inspired by Soundgarden’s ‘Jesus Christ Pose’ and various slow pulsing beats. The stark contrast of the album track really comes alive in the event of this live performance and Stu’s drums are the best they’ve sounded all night. Regular closer ‘666.6’ appears to start slowly, but by the halfway stage a solid groove has been found. Eventually, the band drops into an insanely heavy riff to finish and Kev’s bass is a potential danger to anyone with a weak stomach. With strobe lighting, more bass drones and Matt eventually throwing his guitar around to create waves of sound, there’s definitely a feeling that The Fierce And The Band are a genuine force of nature. It’s a fantastic finish.

Being in a support band is a hard job – sometimes even totally thankless. For The Fierce And The Dead it’s an especially hard task as, for those unfamiliar with the band, there are no choruses to cling to; no easily hummable refrains. There’s nothing instant. There are only riffs. Lovely riffs. Ugly riffs. A world of wondrous complexities and brilliant heaviness pulling the band in different directions and causing a constant, fascinating friction. There’s also ramshackle and unrehearsed banter, but luckily, tonight, Hawkwind’s faith in the band isn’t at all misplaced: most in attendance seem to like what they’ve seen and heard. …And for the band, the opportunity to play at a smart venue in a much loved seaside town has obviously been a thrill. Matt has grinned at the audience almost permanently between numbers and Kev has seemingly enjoyed the benefits the larger stage has offered. For The Fierce And The Dead, the chance to prove themselves in front of a few fans and a gang of unfamiliar faces has been more than worthwhile. 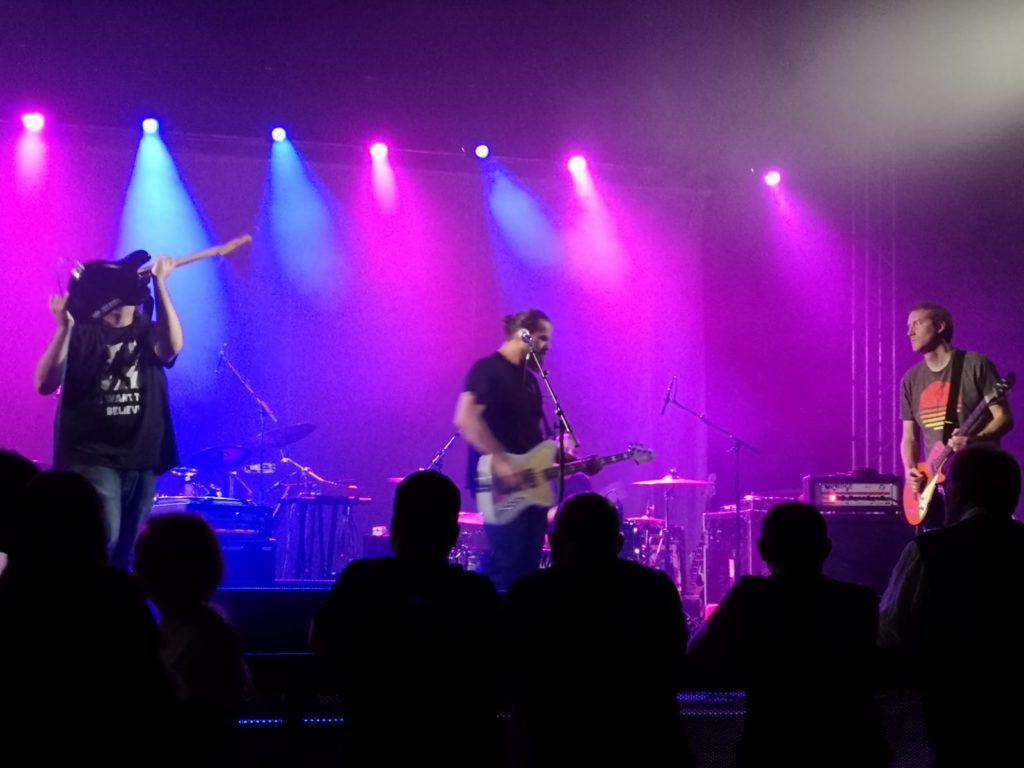