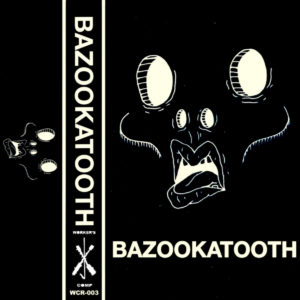 Any Huskers comparisons are amplified by David Meyer’s dual role as both drummer and vocalist, but to be fair, most of his vocals are so buried in this EPs mix, he’s not so much singing (even by hardcore standards) as throwing out sharp and echoing noises into an uncompromising musical void. The overriding noise comes from a sheet of guitars that never lets up, but it’ll take about six bars, though – or about half of the first track – before you realise how tight this trio is. The first two numbers, especially, are a brilliantly thrashing noise that fuses the earliest hardcore influences with the kind of production values befitting of a Polish grindcore band. Both ‘Worthless Climb’ and ‘Want’ tear past with an insane ferocity, destroying souls and speakers alike, suggesting that in the live setting, these three guys could absolutely slay.

It’s only with track three, ‘Precious Boy’, that Bazookatooth dare to stretch out and it’s at this very moment you’ll also realise there’s more to this release than just hardcore; there’s hardcore with a hard melodic edge – it’s heavily disguised at times, but it’s there.. Ben Muller leads the charge with a heavy rattling bass, before the buzzsaw sounds of the previous tracks settle into a more melodic punk groove. There’s room for the riffs to breathe, without actually losing too much power, while a dual male/female vocal also adds plenty of interest. The end results are like a DIY love letter to the Minneapolis and DC scenes…and it’s great. If you’ve made it this far, you’ll love the rest of the EP, and while Bazookatooth largely play to one or other of these musical formulas, there’s so much power in their sound that if you like hardcore, you’ll be mown down by their enthusiasm and intensity.

‘Die Anyway’ isn’t shy in reintroducing that great bass sound and a powerful riff in a way that melds the speed of Zeke with almost the crustiness of a band like F-Minus. There’s so much potential in the music, it’s sometimes a pity that the vocal doesn’t have a stronger presence. However, despite any misgivings about an uneven mix, there’s a natural feel to the performance that adds to the overall interest. At almost two minutes, ‘Dreck’ is one of the band’s longer pieces, but it needs the extra thirty seconds to wring the best from a deeper riff that borrows influence from a hard punk/metal hybrid that then plays that back with a ska-ish bounce. As before, Ben uses the opportunity to present some great bass work and, in fact, all three players come together with a real tightness such a tune deserves. With a touch more variety, this is one of the EPs finest tracks, suggesting the band could eventually refine a more distinctive strain of hardcore somewhere down the line.

‘Winnow’, meanwhile, reverts to thrashing, knockabout fun with the guitars cranked beyond eleven and Meyer absolutely caning his voice while shouting, before set closer ‘Help Me’ suggests much more of the same, but eventually introduces brief spaces that push his drum work to the fore. Tailing off with a slower riff and more bass, Bazookatooth again tease with ideas and influences from a less purist perspective, but since they don’t really follow through, it’s as if business is left unfinished…the teasing bastards!

This release is absolutely furious. It’s eleven minutes’ worth of buzzsaw guitars and riotous anger creates superb hardcore for the most part. The seven numbers are sharp enough to awaken the senses of the older Husker Du fans, yet still retain a feeling that’s completely relevant at least three decades after such primitive sounds were first forged. If “guttural” and “defiantly raw” are two of your touchstones when it comes to punk music, Bazookatooth will definitely not disappoint.