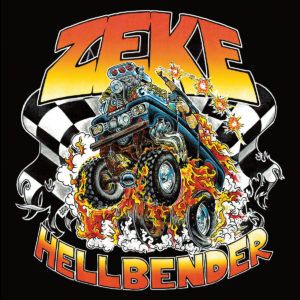 In 2017, Zeke was unexpectedly reborn with a new line-up and founding member Blind Marky Felchtone (vox/guitar) hit the studio with Kyle Whitefoot (g), Kurt Kolfelt (b) and Dayne Porras (d) to record a new album. ‘Hellbender’ is almost everything you’ve come to expect – or want – from a Zeke LP. In their now legendary tradition, there’s nothing on this album that exceeds the two minute mark. In fact, with most tracks clocking in at barely a minute and a half, ‘Hellbender’ could barely pass as an album – it just about reaches the same length as your average CD single back in the day.

A full on thrasher celebrating speed in more ways than one, ‘Redline’ has a very sharp style, with the band channelling an old Motorhead riff, then fusing it with a touch of hardcore punk roughage. The main riff harks back to classics like ‘Telepath Boy’ and ‘Kicked In The Teeth’ before shifting to a second riff – slightly slower, but every bit as intense – for the repetitious chorus hook. The truck obsessed ‘Big Rig’ takes that speed, injects it with a little rock ‘n’ roll fury and pushes forth shredding the two pronged guitar assault, challenging the gruff voice for dominance at almost every turn. With ‘Two Lane Blacktop’ taking the blueprint a touch further by punctuating the thrash with a musical motif that sounds like Motorhead ripping a 70s AC/DC breakdown, that should be enough to convince any naysayers that Zeke are just as relevant and edgy in 2018 as they were in 1995. It’s utterly superb. These three tracks alone should allay any fears that a fourteen year hiatus and a new line up would change the band somehow.

Almost a prog rock epic by Zeke standards, ‘On The Road’ loses some of the punk speed in favour of a high octane, grubby rock affair that comes across like Thundermother played at the wrong speed. A selection of gang vocals makes a metallic belter sound even more raucous, but beneath the sweat, the main riff is one of the band’s best and certainly an album highlight, especially since the band actually take time to add enough space for a pumping bass to cut through, albeit briefly. If you feel that’s somehow too commercial, then ‘Burn’, the title cut and ‘Working Man’ redress the balance by going all out in the speed stakes, to the extent the riffs are little more than a blur topped with fretboard mangling solos and a vocal that’s raspy as hell with occasional lyrics bleeding through. The title track almost sounds like a hardcore punk take on a forgotten number by Falling Sickness with a Greg Ginn inspired lead break thrown in to derail everything. Much like the highest highs of 1998’s breakthrough LP ‘Kicked In The Teeth’, these are almost in, out and long gone by the time you’ve even considered what you might have just heard.

Elsewhere, ‘White Wolf’ celebrates rock ‘n’ roll with an especially shouty hook, but as always, it’s all over by the time it’s started to make a real impact, while ‘AR-15’ offers another cracking solo over a lightning speed grumble (though it’s probably best not to focus on the gun themed lyric, especially at the time of release) and the excellent ‘Cougar Rock’ sounds like ‘Ace of Spades’ covered by Gorilla Biscuits, albeit with Blind Marky’s trademark rasp making sure that this sounds one hundred percent like Zeke at every turn. The rest of the tracks work to very much a set formula, but when played so hard and fast, it would be churlish to consider them filler of any kind. With the average Zeke song’s duration, there’s nothing here that sounds anything short of a lightning bolt powerhouse, and with the legendary Jack Endino in the producer’s chair, it could be argued that Marky and the lads sound better than ever.

‘Hellbender’ is an insane experience, hell bent on shaking your foundations at breakneck pace; all sweat and reckless abandon. With riff after riff after riff and fifteen songs in twenty minutes, if you liked Zeke before, then this is everything you could want from a comeback. Fourteen years? It’s almost like they’ve never been away.