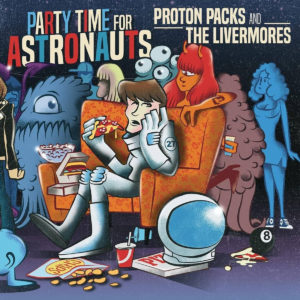 Split releases are always interesting, but once in a while one will come along that’ll be utterly amazing. This 2018 release from I Buy Records (Italy) in conjunction with Mom’s Basement Records (USA) featuring unreleased tracks by Italian punks Proton Packs and The Livermores is such a disc. Although neither band is hugely well known outside their home country, both are capable of supplying first rate Ramones styled pop punk that’s as well played as any.

Proton Packs claim to be the world’s only Ecto-Punk band, but despite a fascination with futurist lyrics – at their most forthright with this EP’s lead track ‘Living On Mars’ – they’re actually a straight up, no fuss Ramonescore act. While musically they stick firmly to the Ramones blueprint, there’s no denying they’re a bloody good band. The aforementioned ‘Living On Mars’ throws out a tough four chord, fast riff that would just as well suit Dan Vapid & The Cheats, Riverdales and even Proton’s sometime label mates Latte+, but does so in fantastic style. The rhythm guitars, especially, have a full blooded sound and that’s almost enough to carry the track. Vocally, there’s a Euro slant, but above all, there’s also a really snotty delivery that gives an already great number a suitably brattish edge. Throw in a semi-shreddy lead guitar that’s more about speed than precision and a simple hook of “oh no, oh no, oh no” and you have a slab of melodic punk that could rattle inside your brain for a week. Packing in another number into just over a minute and a half, ‘USA vs USB’ finds Proton Packs unleashing their inner Teen Idols during a particularly edgy verse, before dropping into the kind of melodic chorus that, again, would do the legendary Danny Vapid proud. Obviously, on the surface, the title that makes up that chorus can seem pretty trashy but that’s half the charm. On this number, the drums are as tight as hell, with a barrage of crashing cymbals to give things an extra sense of bombast and the very fact that It doesn’t waste time with flair, but instead prefers speed and guts makes it especially brilliant. In terms of full throttle Ramonescore, it’s about as fine as you’ll find.

Handing things over to The Livermores, there’s a bit more room for melody. For three Italian musicians who’ve chosen to take their name from legendary pop punk producer Lawrence Livermore, it’ll come as no surprise that their first offering on this EP owes a great deal to many of the great Livermore productions of the past. The intro for ‘Rave On Club’ could be a number of old Queers or Riverdales songs, but despite over-familiarity, the band rip the guts out of the classic riff and play it as if nothing else matters. With a classic tune in place, it’s up to the vocal to keep things impressive and while frontman P.P. has a very strong accent, his sneering approach is still very appealing. Moving through the track with minimal fuss, it’s obvious that the drums are expertly played despite being too low in the mix, but that doesn’t detract from the performance too much. Their other tune, ‘Panama Papers’ sounds so much like one of Ben Weasel’s contributions to Riverdales in it’s shameless Ramones love…and looking closer to the works of Johnny and Joey themselves, it’s easy to spot how this tune has probably been derived from the classic ‘Havana Affair’, even though the band haven’t gone the whole hog and used a punctuating bass drum sound for a cannon. If you love anything at all that falls under the Ramonescore banner, you’ll absolutely love this: the guitars are tough but melodic in terms of the punk in hand; the vocals are assured and the very repetitive hook is a real winner…even if the word Panama often sounds a bit too much like banana!

This is such a good EP that it’s almost impossible to pick one band over the other with regards to best performances. Since they’ve only released a couple of EPs prior to this, The Livermores have more to prove, but all four songs are of the highest grade Euro-Ramones fetishism and each band plays as if their love for the style encompasses everything. It’s short, but it’s a wonderful collection filler for any fans of the style…and proves yet again that a split 7” can be the ultimate punk artefact. Grab it now!