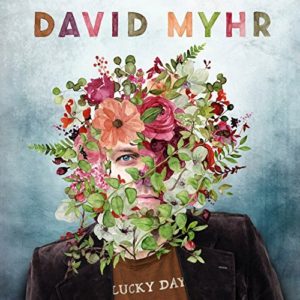 Let’s not mince words: David Myhr’s solo debut ‘Soundshine’ is a classic album. Not just for the time of its release, but a genuine classic. Its retro pop style places it on a par with 10cc’s ‘How Dare You’, with Wings’ ‘London Town’ and Badfinger’s ‘No Dice’. In terms of more contemporary recordings, it rivals the Oranjuly debut and Jellyfish’s ‘Spilt Milk’ for sheer pop wonderment.

A follow up had a hard act to follow and perhaps knowing he had a big job in hand, Myhr rallied around the troops. As a result, 2018’s ‘Lucky Day’ features co-writes with Linus of Hollywood, Bleu, Bill DeMain and Young Hines – names which should be familiar to most power pop aficionados – and songwriter/producer Brad Jones, a man whose credits involve working with Matthew Sweet, Jill Sobule and Josh Rouse. It’s fair to say it’s got some solid foundations.

Those who loved ‘Soundshine’ will experience a similar wave of instant gratification, since ‘Lucky Day’s opening number ‘Jealous Sun’ (co-written with Bleu) is made of similarly bouncy pop, with Myhr joined by choirs of vocals, an acoustic guitar and a world of multi-layered pop that finds a space between Badfinger and George Harrison. In fact, it’s one of those numbers that sounds great on first play, but with each successive spin feels more like something you’ve known for thirty years or more, like a bedfellow to Harrison’s own ‘Crackerbox Palace’. ‘My Negative Friend’ follows suit with a McCartney-ish piano, various stabbed rhythms and more layers than you’ll find on a Graham Gouldman production. Lyrically, it finds David Myhr in a great headspace, attempting to inject some positivity while reminding us we only get one go at life and we need to make the best of it. Taughtly arranged, this brings plenty of semi-acoustic honey alongside sharp piano work and a breezy vocal. Myhr’s sense of pop is so entrenched in the past, that this tune – like the finest Andy Steurmer and Roger Manning recordings – is almost impossible to pin a performance date upon.

More reflective, ‘Every Day It Rains’ works a soft pop arrangement with a bigger focus upon acoustic elements, though without losing sight of a pure pop goal. Despite retaining a buoyant rhythm there’s a sadness within this number, not least of all from Myhr himself, evidenced in his delivery having a more downbeat tone. Joined by soft harmonies, it is unlikely to be considered one of the album’s standouts by many, though a nicely arranged backdrop yields a fine result, but one that’s perhaps closer to Nick Heywood or Roddy Frame than McCartney. Also in a swoonsome mood, ‘Love Bug’ offers a waltzing riff, a world of acoustic guitars and syrupy harmonies. Myhr comes closest to wallowing in something unashamedly cheesy here, but the attention to detail in the arrangement combined with a welcoming vocal ensures it never feels too syrupy. A touch rockier in places, ‘The Perfect Place’ lends the album another instant classic with a world of jangling guitars, great backing vocals and a happy-go-lucky chorus where David really embraces his inner Beatle. With more than a nod to ELO in the mid-section and a full string section used tastefully during its coda, this is a masterclass in pop.

A little more modern, ‘If You Really Think It’s Over’ works a world of mandolins and twelve stringed acoustics – something that suggests more of a Waterboys/World Party feel – before the whole band explodes into a solid pop-rocker that’s big on drums and other percussion. As you might expect, it comes with a great radio friendly hook, one that’s eventually closer in spirit to some of the ‘Soundshine’ materal…and it’s none the worse for that, obviously. ‘Room To Grow’ presents a very upbeat three minutes thanks to a shuffling rhythm, some brilliantly retro jostling keys and a crying vocal. Combined, everything screams 70s throwback. A co-write with Bill DeMain, this track cares nothing for fashion and is all the better for that; Myhr’s vocal lines are of the easy listening school, but he always takes pride enough to ensure things never move too far towards muzak, while the slower title cut indulges in a semi-maudlin tune that presents some lovely dobro-ish sounds against a deliberately old school electric piano. It may not whip up the good vibes of many of Myhr’s best songs, but its measured mood works very well. There’s also something about the choice of vocal that makes it sound like a homage to Gerry Rafferty…so it can’t be all bad! ‘Wait Until The Moment’, meanwhile, finally succumbs to retro cheese and plays out as a gentle samba – something possibly more suited to a Christopher Cross LP than the broader appeal of a McCartney – but it’s an eternal credit to David’s talents that even this weak link on the album sounds as if it’s been plucked from a pop goldmine and moulded into a number that never feels entirely throwaway. …And while it might be more of an acquired taste, his chosen lead vocal style manages to be laid back but still sparkle with a timeless sense of melody.

The close of the album brings another winner: ‘The Only Thing I Really Need Is You’ finds Myhr in a thoughtful lyrical place, looking at all the little things we take for granted, while musically, this acoustic workout tips the hat to similar works by McCartney – especially so when the tempo lifts for a mid section. Perhaps best of all, though, is Brad Jones’s contribution on the bass. Throughout the track he plays with warmth and fluidity, almost as if he’s stepped out of a cover of Faces’ ‘Debris’. It’s quite lovely and a great way to finish. [The album includes four uncredited bonus tracks for CD buyers, including two covers. It’s only fair you should discover these surprises for yourselves, but let’s just say they really add something extra to an already great release. Two of the tunes should be familiar to everyone with at least half an interest in this album…]

As with ‘Soundshine’, it’s always possible – and fun – to pinpoint most of David Myhr’s classic pop/rock influences throughout this record, but once again, that doesn’t detract from his being a multi-talented musician and writer of fantastic – even timeless – melodies. Despite including contributions from various songwriters and being recorded at four different studios, ‘Lovely Day’ is a complete sounding album, every bit the equal of ‘Soundshine’, and destined to soundtrack summery days…no matter what the weather. Miss this one and you’ll be missing a real treat.