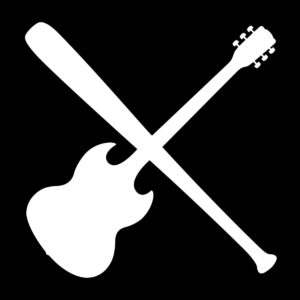 With the first side only comprising of just three tracks, the band allow listeners a chance to warm up. The EP’s title track isn’t as much punk as good old sweaty rock, with Rene SG tapping into a tough riff that sounds like a cross between 70s AC/DC and heavy biker rock. There’s a simplicity to the riff, but that’s all that’s needed for it to work. Any embellishment here comes from the bass and pretty quickly, Dennis (no second name) shows himself to be a gifted player by dropping in various busy lead runs behind the crushing guitar riff. Don’t expect anything flash lyrically… The band make a grand entrance by repeating the line “Yo, fucko…yo, yo fucko” about as many times as would fill an average verse of punky banter. If you came looking for a sweaty combination of Zeke and Nashville Pussy, things are surely off to a grand start.

An instant standout, ‘I Don’t Give A Fuck’ (not a cover of Screeching Weasel’s high octane banger of the same name) gives a much better indication of the trio’s talents. The guitar riffs come at breakneck speed, much like a hybrid of the aforementioned Weasel track run through a sweaty filter of the most insane Dwarves material. The tightness of the band has to be heard to be believed, with extra kudos to drummer RJ SG really going through the paces here. Musically, it’s somewhere near the pinnacle of thrash punk, while lyrically it sticks rigidly to a Rene SG tradition of silliness used to offend in a very direct way – in this case, just repeating the track’s title as a mantra. ‘Til Hell Freezes Over’, meanwhile, presents a much rougher band. The speed and intent are intact, but the production values give the guitars a muddy edge and the snare drum a harsh and almost tinny sound. The Zeke-ish pace is there, but overall, this track feels more like an early Circle Jerks homage in the way it plays out. Maybe with better production it would match the previous track for instant throwaway thrills, but presented as it is, it’s much harder to latch onto what should be a great riff.

On the flipside, it’s time for Rene SG to go absolutely insane as they cram nine tracks into almost as many minutes. Their preferred f-word sometimes has to bow down for a showcase of songs centred around “shit”, but if you’ve made it this far, the ensuing light-speed swear-fest probably won’t disappoint. ‘Ride Like Hell’ fills twenty one seconds with a choppy riff that sounds like a cartoonish version of Keith Morris’s OFF!, accompanied by a spiky vocal before dropping straight into ‘Go To Hell’, a lo-fi thrasher that’s like a more accessible take on the crusty punk of Anxiety Junkies. If you want disposable hardcore, these tracks are fine – and miraculously suitable for all ages, but there’s nothing at stake you wouldn’t have heard a thousand times before.

Similarly lo-fi, ‘Fucked Up’ nails the thrashing pace to a scattergun vocal but maintains interest by dropping in a couple of stops, which is enough to make it the EPs second best offering, while ‘Piece of Shit’ and ‘Fucking Shit’ both bring back the welcome production sharpness present on the majority of side one. While the tracks could probably be seen as interchangeable with ‘I Don’t Give’, it’s a useful reminder that these guys can play really well, whether or not their material has any real sophistication, with drummer RJ really putting in some hard yards. The latter sounds particularly amusing given that the Euro accent isn’t remotely hidden. Another skull pounder, ‘Full of Shit’ teases with a riff that sounds like it’s on loan from Greg Ginn before bursting forth into yet more Zeke-y hardcore; there’s even time along the way for some brief metallic pounding to bring things back in line with the trashy hard rock of the opener. It’s amazing how much can be squeezed out of just fifty two seconds in the right mindset. If you want it fast and razor sharp, these numbers should amuse…even if only in the short term.

Bringing things up to the full dozen, ‘Arty Farty Bullshit’ teases with a superb hardcore sound with plenty of bass to go with a reasonably grumbly guitar riff. It’s a case of a wasted opportunity, though, as given a chance to stretch beyond its allotted twenty seconds, this music could have been one of the band’s best arrangements, regardless of any lyrical banality. ‘Short Track’ and ‘Fuck You’, on the other hand take less than ten seconds apiece just to present a singular riff and a quick shout of the chosen titles. Near pointless, you might say; on the other hand, if you’ve found any merit within Rene SG’s approach by now, these Lawnmower Deth-esque pieces of ridiculousness should raise a quick smile.

And that’s it: twelve songs, approximately ten minutes and seven inches. If you somehow wanted erudite sculptures of the English language and a great example of how punk can be used to spread important social messages – as per Bad Religion’s Greg Graffin – your time is certainly wasted here. Rene SG often make Nobodys look sophisticated. There’s no real longevity, but to expect that would be missing the point. However, provided you’re not shallow enough to be offended by the f-bomb, this EP provides both fun and ferocity in equal measure.